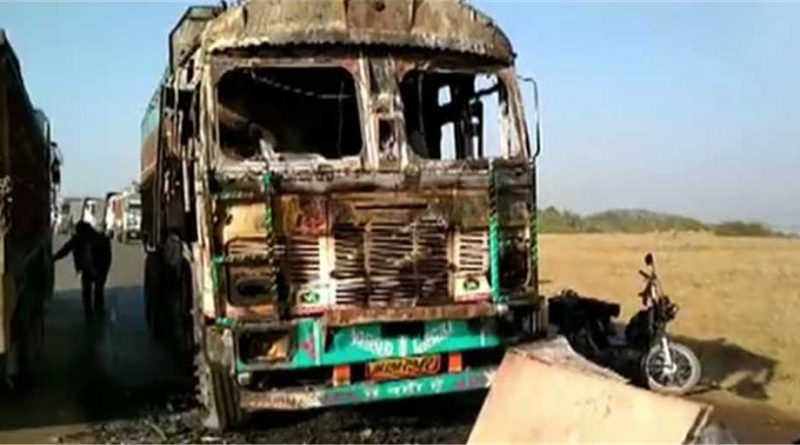 A group of around 10 suspected CPI(Maoist) rebels torched 13 heavy vehicles parked at a stone-crusher plant on Friday night.

They also left a note saying such plants were harmful to the environment and the workers.

The incident occurred at Chaparwar under Pipra police station, around 60km from here. Three trailers, one truck, eight tipper trucks and one pay-loader were damaged in the arson.

The rebel violence during the lockdown has come as surprise for Palamu police who suspect Maoists from Bihar’s Chakarbandha to be the brains behind the attack.

“The Maoists triggered a low-intensity improvised explosive device near the stone crusher, but no visible damage was done to the plant,” said Palamu superintendent of police (SP) Ajay Linda.

Linda said the blast and the arson were intended at striking fear and extracting levy.

The SP said the owner of the stone crusher, Ramashish Singh, had never earlier complained to police about any threat or danger to him or his plant from the rebels.

Linda said the Maoists did not open fire, but intimidated the staff at the plant and also slapped one of them. “We suspect top Maoists Nitesh, Abhijeet and Arvind from Bihar to be the brains behind the attack. Local rebel Sanjay Godram and his team carried out the arson.”

Security forces comprising district police and CoBRA personnel were on the hunt for the rebels, Linda added.

Sources said the police had seized a handwritten leaflet from the spot where the rebel outfit had not only taken full responsibility for the arson, but also expressed concern over how stone crushers were harming the environment and the laborers working there.

“In the leaflet, the rebels have written how smoke and dust from the stone-crushing plants were harmful for the laborers,” Chhatarpur sub-divisional police officer Shambu Singh said.