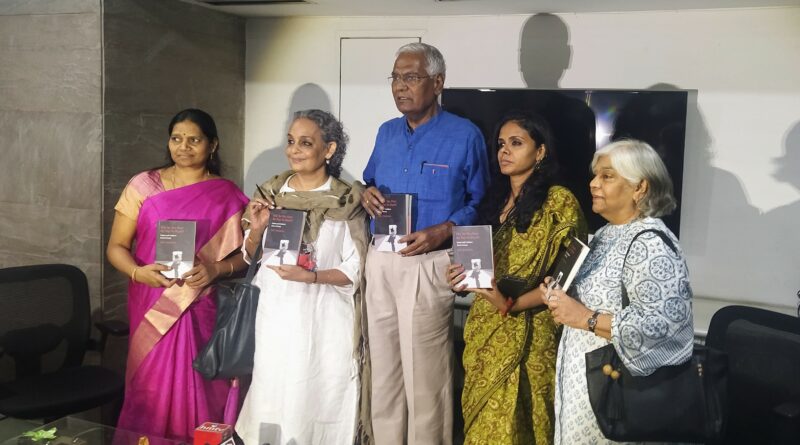 New Delhi, May 5, 2022: A 250-page collection of poems and letters by political prisoner Dr G N Saibaba was launched on Wednesday by the general secretary of the Communist Party of India (CPI) D Raja. The book titled ‘Why Do You Fear My Way So Much?’ is a compilation of Saibaba’s account of thoughts and experiences in prison.

The launch was attended by Saibaba’s wife Vasantha Kumari. She shared how her husband overcame disability and poverty and became a highly-regarded professor. She added that the book also gives an account of how prison authorities at Nagpur central jail ill-treat the academic.

“The book contains the account of his difficult experiences in prison that he shared with me and his friends through letters,” she said. “He reads and writes to elude the pain,” she added.

Booker Prize winner Arundhati Roy said: “What are we doing here today? We are meeting to talk about a professor who is paralyzed 90% and has been in jail for seven years. That is what we are doing. That is enough. We do not have to speak anymore. That is enough to tell you what kind of country we are living in. What shame is this?”

Saibaba, a physically challenged former professor of English at Delhi University’s Ram Lal Anand College, was first arrested in 2014 under the Unlawful Activities (Prevention) Act. In 2017, he was sentenced to life imprisonment for alleged links to the CPI (Maoist).

In the book’s introduction, Vasantha Kumari narrated the former DU professor’s experiences, right from being picked up by police to the difficult days he faced during the Covid-19 lockdown, in grim detail in the introduction. “He never wrote poems before but he sent letters sharing his thoughts,” she said.

Vasantha also spoke about the factors that shaped Saibaba’s ideology and his passion for teaching and working as the defender of human rights. “In one of his letters, he mentioned about a dream that he saw where he was teaching in a classroom, surrounded by students and a blackboard,” she said.