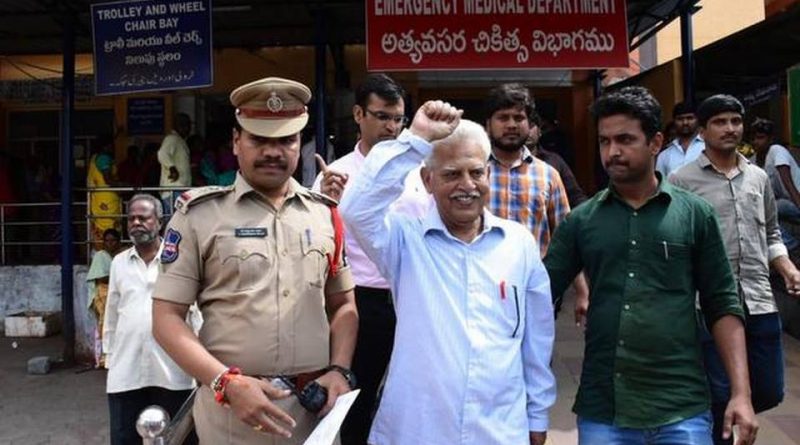 While India is reeling with Covid-19, the country’s central and state governments are reluctant to release an octogenarian old man from prison. Varavara Rao, a 81 year old revolutionary poet, is in jail on the Bhima Koregaon case. Meanwhile, some inmates of that jail have died due to Covid-19. Prominent personalities of the country and abroad have become vocal in demanding the release of this revolutionary poet. As a thinking, progressive person in the society, we think that it is our moral duty to be vocal in demanding the release of Varavara Rao, at least for humanitarian reasons.

On the occasion of the 200th anniversary of the victory of the Dalits in the war against the upper caste Peshwas at Bhima Koregaon, Maharashtra, Hindutva forces spread violence and on 28 September 2018 Varavara Rao, Sudha Bharadwaj, Vernon Gonsalves, Arun Ferreira, Gautam Navlakha were arrested from Delhi, Pune, Faridabad, Mumbai, Hyderabad on multiple charges. Later Shoma Sen, Anand Teltumbde, Surendra Gadling, Mahesh Raut, Sudhir Dhawale, Rona Wilson and many other social workers, lawyers, poets and professors were arrested. They were charged under various unconstitutional laws like Unlawful Activities Prevention Act (UAPA), sedition and so on.

The list also includes 90 percent physically challenged Professor G N Saibaba, who is being held in the small ‘Anda Cell’ of the Nagpur Jail. There is no infrastructure to keep a physically challenged person like him. As a result, his physical condition is deteriorating day by day. On the other hand, the veteran Maoist theoretical leader Kobad Ghandy, despite suffering from a deadly disease like cancer, is being conspired to block his release from jail with new false charges.

On 28 May, poet Varavara Rao fell unconscious in jail. He was admitted to J J Hospital in Mumbai. Although his condition was just slightly stable, he was brought back to jail on 1 June. Varavara Rao’s family was not allowed to visit the hospital. They didn’t even get a chance to talk to the poet on the phone. In this situation, Varavara Rao’s wife applied for bail in the NIA court but that application was rejected. Although article 21 of the Indian Constitution guarantees the right to life even if a citizen is imprisoned. on June 26, the NIA court again rejected the bail plea of Varavara Rao regarding illness.

We have seen that in India different national and local parties make different promises during elections, but there is little difference between them in terms of anti-people policies and anti-people laws like UAPA, sedition etc. Almost all parties have been using these laws to suppress dissent. However, in spite of this repressive policy of the state, the protests and movements of workers, peasants, students and social workers in different parts of India have not stopped. And this is where the ruling class fears the octogenarian Varavara Rao, or the physically challenged Professor Saibaba. That is why they have to be kept in jail even during the coronavirus crisis.

In contrast, at least 100 leading intellectuals in the world, such as Noam Chomsky, Judith Butler, Homi K Bhabha, Partha Chatterjee and Gerald Horne have written letters to the President and Chief Justice of India demanding the release of Varavara Rao. 375 prominent personalities of India including Amol Palekar, Shabana Azmi, Shankha Ghosh, Aparna Sen, Kaushik Sen have written an open letter to the Central Government of India.

Meanwhile, recently 14 Indian MPs wrote a letter to Maharashtra Chief Minister Uddhav Thackeray requesting that the revolutionary poet Varavara Rao be transferred from Taloja Jail in to a hospital. Several inmates have already died of coronavirus in that jail. Officially, the number of Covid-19 confirmed cases in India is about half a million, more than 16,000 died. Almost every day new records of infections and deaths are being set.

The Indian government is playing tricks on the life of Varavara Rao and others, who were detained fearing mass movement. The Government of India will be held responsible if any of them are infected with the virus during their detention on coronavirus crisis. We once again demand the Government of India to immediately release the revolutionary poet Varavara Rao and other social workers. It is our moral duty today to be vocal in this demand.