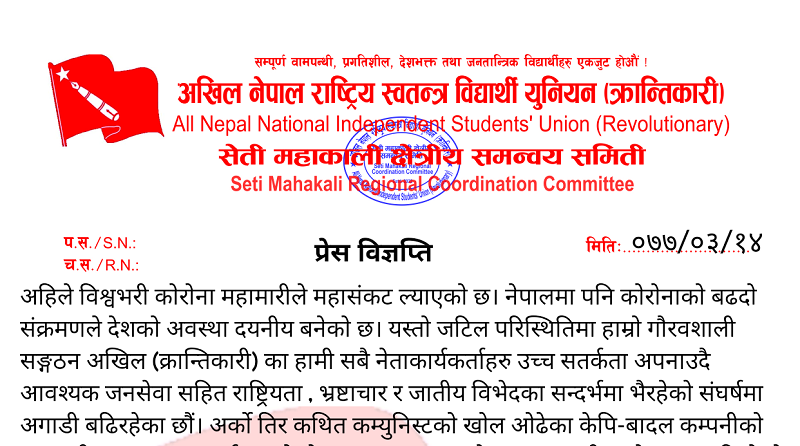 The Corona pandemic is now a global catastrophe. The situation of the country has become deplorable due to the increasing infection of corona in Nepal as well. In such a complex situation, all of us leaders and activists of our glorious organization Akhil (Revolutionary) are moving forward in the ongoing struggle about nationalism, corruption and caste discrimination with the necessary public service. On the other hand, KP-Badal company government is being severely repressed on our organization, which is covered with the shell of the so-called communist banner, and steeped in corruption.

The broker government have arrested BabarJung Singh, central member of our organization Akhil (Revolutionary) and Subash Joshi, chairman of Kailali district from Dhangadhi on Jun 27 at around 5 pm. We strongly condemn the repression of government on the student leaders. The attitude of the state and its security forces to force pen-carrying student leaders to carry guns, disregarding the fundamental right to peaceful conference and protest, and all human rights and values ​​is looted by police.

We urge the local administration and security agencies not to go beyond their jurisdiction under the direction of the corrupt KP Badal company government , and not to become too agitated and mock the law. We heartily appeal to all journalists, human rights activists, lawyers, student friends and others to stand against the white terror of the state.

We also strongly demand the unconditional and honorable release of the arrested student leaders and comrades. Otherwise, that we will fight against the puppet government and its puppets.we want informed through this press release.