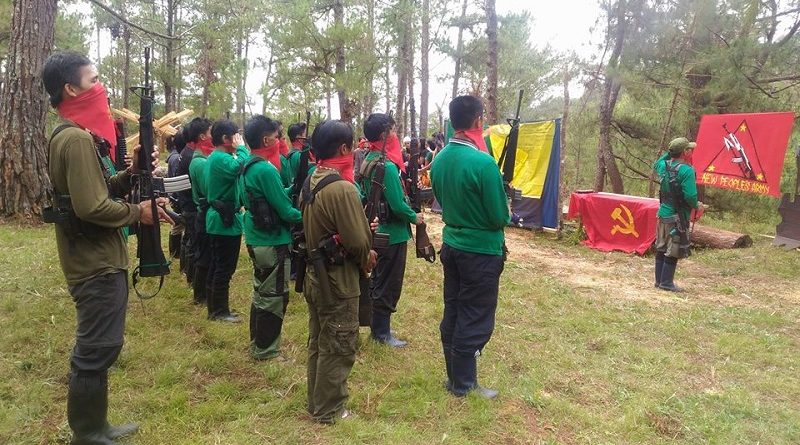 Last August 15, barangay captain Vergilio B. Loquias of San Antonio, Hilongos, Leyte was punished by the New People’s Army under Mt. Amandewin Command around 12 o’clock in the afternoon.

The decision to put Loquias punish was decided upon by the Revolutionary People’s Court as penance for his blood debts against the People’s Democratic Government. Despite the efforts of the revolutionary movement to reach out and help him, Loquias stayed an active member of the Barangay Intelligence Network (BIN) and an organized military asset who was anti-revolutionary and anti-people. He caused chaos within their barangay as he threatened civilians who were regarded as supporters of the revolutionary movement, implementing unjust policies such as banning residents from buying rice exceeding their family’s needs as well as transporting it to their farms. He also prohibited farmers to plow their lands while the soldiers conducted their operations.

Aside from that, Loquias is also considered responsible for the raid last May 10, 2017 in the forested area of the said barangay. Kasamang Moyo Deregio, an NPA member, died during the raid while some important military apparatus were confiscated.

These various incidents caused grave difficulty in the lives of the masses while there is this worsening socio-economic crisis in the country.

We strongly condemn the Armed Forces of the Philippines for perverting the truth that Loquias is an instrument used by the tyrant and fascist government so that the ruling class can maintain their power, corrupt actions and preserve our perishing country. This is a desperate move of the susceptible military forces to turn the masses against the true People’s Army and the revolutionary movement.

We call on members of the AFP-PNP-CAFGU who are still compassionate and patriotic to stand up for your people and stop being an instrument of this tyrant and fascist US-Duterte regime. Give up your arms and cooperate with the People’s Democratic Government. Meanwhile, the People’s Army will continue to fulfill its sworn duty to defend the people and launch tactical offensives, to punish the worst of the human rights violators among the police, military, paramilitary and intelligence units of the GRP and to hold them accountable before the People’s Democratic Government. #