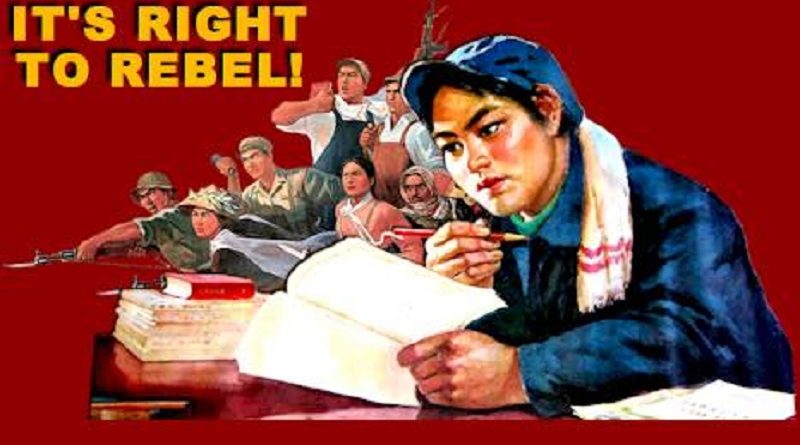 Marxism-Leninism-Maoism is a third and higher stage in the development of scientific socialism.

Marxism was developed by Karl Marx and Frederick Engels in the Epoch of Capitalism. Marxism-Leninism was developed by Lenin and Stalin building on the universal aspects of Marxism through the experience of the worlds first successful socialist revolution and the construction of socialism in the USSR and Maoism, was first developed by Chairman Mao Tse- Tung and the communists of China, building on the universal aspects of Marxism- Leninism and through the victory of the Chinese revolution and the development of the struggle against imperialism.

The universal aspects of Marxism-Leninism-Maoism were synthesized in the 1980s by the Communist Party of Peru, under the leadership of Chairman Gonzalo, developing the theory of Maoism into a great universal weapon of the working class through the fire of revolution.

Today, Marxism-Leninism-Maoism gives hope to all those struggling for communism against the betrayal of revisionism and sets out a roadmap for victory in the struggle for national liberation and socialism, through the theory of Protracted People’s War, the Military theory of the working class that has guided successful revolutions in China, People’s Korea and Vietnam and continues to be utlised by the people of India, the Philippines, Nepal with devastating effect, continuing to inspire Working Class and oppressed peoples all over the world.

Irish Revolutionaries have always sought to apply the most advanced methods of scientific socialism to the concrete conditions of the struggle for national liberation and socialism.

James Connolly and Liam Mellows successfully applied the Marxist Method to the Irish Struggle, which was built on later by revolutionary cadre such as Seamus Costello to build a Marxist Leninist fighting organisation of the Irish Working Class.

Since the victory of the Chinese Revolution in 1949, have closely studied the experience of Mao and Maoism. During the border campaign from 1956-1962, IRA Prisoners, led by Seamus Costello, then just a teenager, studied the Chinese Revolution and the struggle for national liberation and socialism in Vietnam and attempted to apply the lessons of those struggles to Ireland. On release, this led the IRA to adopt a position of engaging in revolutionary mass work alongside its military campaign.

During the 1960s, Seamus Costello, then a member of the IRA Army Council approaches Revolutionary China for Financial support, weapons and training for IRA Cadre to continue the struggle for national liberation and socialism.

And again in the 1980s, as the People’s War was waging in Peru, a number of IRA commanders along Britain’s illegal border in Ireland, who had studied the writings of Mao while in prison, began to develop a strategy for Protracted People’s War in Ireland. IRA Cadre such as Jim Lynagh, Padraig McKearney, Seamus McElwaine, Padraig Kelly were to the fore in attempting to create liberated areas along the border that could be linked together to create a system revolutionary dual power and were said by comrades to building towards a Vietnam style TET offensive. These IRA leaders and there comrades however, were systematically taken out in targeted assassinations by British terrorists in Ireland.

One again, in the 21st century, Irish Revolutionaries and the Irish Working Class must look to the most advanced teachings of scientific socialism to advance our struggle for national liberation and socialism. Irish Revolutionaries must study Marxism-Leninism-Maoism and attempt to apply its universal aspects to the conditions in Ireland today.

The building of a United Front, uniting all revolutionary forces in the struggle for national liberation and socialism is one of the most pressing tasks for Irish Revolutionaries. The United Front, one of the key tools of Maoist Strategy and Tactics and long advocated in Ireland by Seamus Costello under the name ‘Anti- Imperialist Broad Front’ is the vehicle through which the Irish Working Class can defeat capitalism and imperialism and rebuild the Socialist Republic. This is the of our generation.