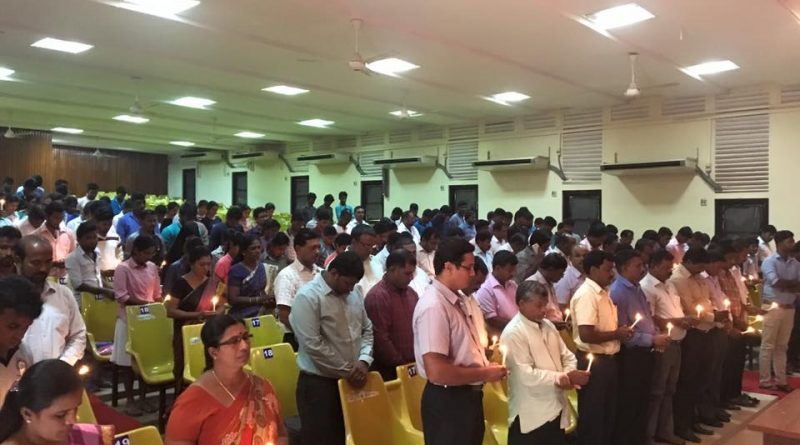 Delivering a sharp message against the threats coming from armed Sinhala policemen of genocidal Sri Lanka, who stormed the hostel premises in the early hours of Wednesday and warned the students not to mark Tamil Eelam Heroes Day, the entire University on Friday confluenced at Kailaasapathy Hall commemorating Tamil Eelam Heroes Day. Academics and students, including Muslim and Sinhala students, took part in the memorial event lighting candles in front of the symbol of Kaarthikaip-poo, the flower declared by the Liberation Tigers of Tamil Eelam as the national flower of Tamil Eelam. Photos celebrating the life of LTTE Leader  and posters paying tribute to fallen Tamil Eelam Heroes were put up at several places. The move, planned in total silence, was quickly mobilised as the students wanted to mark it before the weekend this year.

The SL police and military intelligence didn’t expect the commemoration on Friday and the event was openly marked without any harassment.

The entire University community in Jaffna wanted to pass a strong message to the world.

“The invincible heroes of the independent struggle of Tamil Eelam, were not prepared to surrender the sovereignty of Eezham Tamils and they sacrificed their lives with dignity. None of them militarily surrendered the struggle. The sovereignty and independence of Eezham Tamils are not negotiable and would brook no compromise, as the doyen of Eelam Tamil sovereignty movement proclaimed it 47 years ago in 1969,” a student leader of Jaffna University Student Union said.

In the meantime, Tamil politicians, grassroots activists and the students of Jaffna University also joined the families of Tamil Heroes in cleaning the remaining structures at one of the Tamil Eelam Heroes cemeteries (Maaveerar Thuyilum Illam) at Kanakapuram in Ki’linochchi.

A video showing some of the remaining structures at Kanakapuram thuyilum illam, published in September 2016, follows: