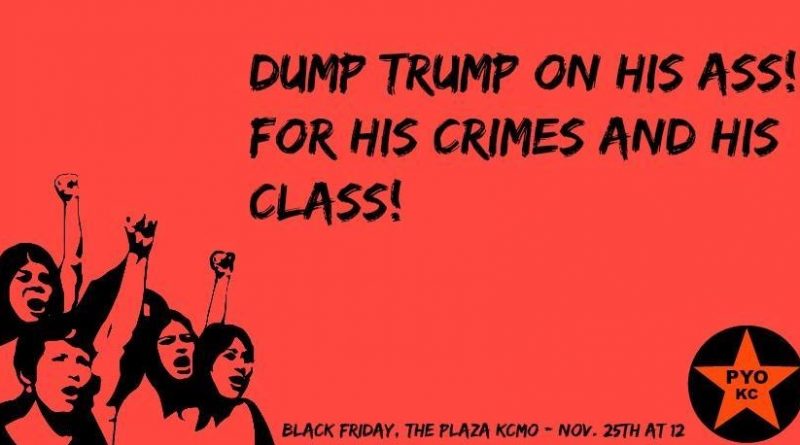 We live in a period of ascendent fascism. From Trump and his followers in the United States, to Marine Le Pen and the National Front in France, to the Golden Dawn in Greece, fascism and reaction are on the move across the imperialist countries. This is the result of both the general crisis of capitalism in which economic stagnation continues to deepen, as well as the cessation of the normal functioning of the so-called “democratic” political systems in the imperialist countries. In the U.S. this was made particularly clear in this latest election with the systemic instances of voter suppression and rigged elections. The masses of people are no longer even clinging to the belief that the system is merely rigged against them, but that the entire political system exists not for them, but for the ruling class. It has been throughly exposed, even to those who didn’t want to accept it, that the entire political system in the United States is rotten to the core and completely bankrupt and therefore is to be rightly rejected.

As a consequence 46% of the country passively, or actively, boycotted the election. It was clear to many that the choices presented by both major parties, and even the inconsequential third parties, were repugnant or ineffective. What the Democratic Party presented was more disastrous neoliberalism, more war, and more brazen corruption. What the Republicans presented was a toxic blend of fascism, white nationalism, xenophobia, racism, and sexism. In short, a choice between a Reagan or a Thatcher, or Mussolini. Such as choice we must on principle oppose as akin to choosing to die slowly or to have your life snuffed out quickly. The various third parties, locked out of political participation, formed an amusing sideshow to the spectacle of the election, but no serious challenge. Of course this was by design, as American “democracy” from the days of the Founding Fathers has been explicitly crafted as an apparatus designed, in the words of James Madison, “to protect the minority of the opulent from the majority.” This was made clear to those who still doubted the anti-democratic nature of American democracy by the behind the scenes maneuvering that led to the neutralization of the populist candidate Bernie Sanders, which proved that not only is working within any major party fruitless, but that the political and economic system cannot accommodate even moderate social democratic demands and reforms. The neoliberal consensus has become so entrenched that the possibility of change from within, so long propagated by liberal idealists as the only viable strategy, has gone up in flames in front of their face. Funneling mass resentment and energy into the Democratic Party presents no viable alternative and will inevitably end in cooption, and thus neutralization, or will be stamped out.

Donald Trump, and the conglomeration of fascist groups coalescing around him, represent the most vile and dangerous elements of the same “democratic” system that Hillary and the Democrats stood for. Our orientation towards Trump should be the same as our orientation to Hillary, the Democrats, and the entire U.S. empire, militant resistance with the goal of smashing them to bits. With the rise of Trump comes the rise of the so-called “Alt-Right”, or, more accurately, Neo-Nazis and white supremacists that long ago traded in their brown shirts and armbands for a suit and tie and an undercut. We uphold that it is wrong to stand idly by and preach pacifism in the face of a fascist threat. Through our study of the history of fascism we know that fascism is based on reactionary violence, and therefore cannot be defeated with hugs or love, as the liberals of today preach, but only with organized, disciplined, direct action. As with all things reactionary, if you don’t hit it, it will not fall. Fascism is not to be debated but smashed.

Today we aim to strike at the pocketbooks of those who financially supported Trump, and thereby facilitated the rise of fascists to power. We will block foot-traffic, and obstruct shopping to those businesses that donated to Trump’s campaign in a militant effort to strike directly at what the fascists hold dear, cold hard cash based on exploitation and their economic power structures. We understand that this action alone will not remove Trump and his cronies from power, but it will shock those fascists and their enablers who feel emboldened by Trump’s victory into the realization that we are serious. That the beginnings of organized resistance are under way. We will become steeled through every action we take against Trump and his fascist goons, steeled through struggle, hardened through direct action that strikes at the very heart of this decaying machine of exploitation and terror. Our long term goal must be to construct a determined, militant, and disciplined anti-fascist movement capable of striking at the roots of Trumpite fascism, and its basis, decaying capitalism itself. This must necessarily be a protracted process, but now, more than ever, such a process must be initiated, which is what we are doing today. Furthermore, we must construct such a movement on the basis of principled unity and on a sound theoretical basis. Those who refuse to recognize the interlocking nature of fascism, capitalism, and imperialism will fail in their struggle against any of them. It is absolutely urgent to grasp this connection in its all-sidedness in order to effectively fight and resist.

We must also oppose those who support Hillary and the Democrats, as they represent and constructed the same monstrous system that Trump now controls. The same system that bombs innocents overseas, the same system birthed from colonial genocide and slavery, the same system that pushes down further the working class into the depths of despair and economic misery, and the same system that terrorizes the black nation with its police and prisons. Our oppressed nations comrades, especially the black nation, have lived under fascist terror for 400 years. Fascism is an old, but very real enemy to them. An ever-present reality built into America as a political entity itself. Which is why we have a duty to oppose fascism, capitalism, imperialism, and the prison house of nations that is the United States. We must also isolate and ruthlessly criticize those who wish to divert people’s energy into pointless petitions to the Electoral College or other such nonsense, as again, appealing to structures of power that are anti-democratic by nature is an exercise in futility and utopianism. The Alt-Right and Trump laugh at such toothless displays of resistance, and they are right to. Power does not concede power to signatures on paper, it never has and it never will.

Those who refuse to directly confront fascism and instead muffle the voices of the marginalized, oppressed, and exploited people with the mouthpiece of pacifism must be opposed and criticized as well. They stand in the tradition of the old liberal collaborators in Germany, Italy, Spain, and Chile that made absurdities of democratic absolutes of free speech, and thereby facilitated the rise of fascism. They led the vulnerable into the arms of death in the name of unprincipled peace. We recognize no peace with fascists because fascism means death for us, for our LGBTQ comrades, our black and brown comrades, and for our Muslim comrades. It is right to fight back against them, to resist them in the name of self-preservation and self-defense. We see no value in providing a platform for fascists to air their views in the name of “democracy” either when their expressed goal is to smash the very platform they are given, and to drag us to the depths. Such a view is a paradoxical display of tolerance gone awry. We must expose and defeat fascists and their enablers by any means necessary, to not do so is to be complicit with it and to naively and dangerously lead others on the road to doom.

We don’t defend the rotten capitalist system and the fraudulent democracy of the United States from fascism, because both are two sides of the same coin. In fact, the discontent engendered by the worsening economic conditions for the masses here, combined with a deadlocked and unresponsive political system, is what birthed Trumpite fascism. To believe that we can continue on the road of capitalist-imperialism in the face of a heightened world crisis and impending economic and environmental catastrophe is pure utopianism. We, and the downtrodden here and across the world, want out of this cycle of destruction and calamity. We won’t fight for a system with one foot in the grave. We will fight for something better, a world free from the maniacal reign of capitalist-imperialism and its decayed and brutal outgrowth, fascism. We will never cease our struggle no matter the odds. We have the People’s cause on our side and we know one day we will be victorious.

Today is only the beginning of developing that anti-fascist struggle that can one day declare fascism extinct. Be proud to be the first on the front lines, but don’t let today be the end. Let it be the dawning of a new period of courage in the face of reaction, an opening in the great struggle to come for the liberation of the oppressed peoples the world over from the bootheel of tyranny. You stand with millions in opposing Trumpite fascism. From the Philippines, to India, to France, to our comrades in Progressive Youth Organization-Saint Louis rising up in anti-fascist resistance today in solidarity with us, you are not alone in your fight. You must make your actions felt at work, in the streets, and on your campuses, not just here today. The fight against fascism extends to every sphere of life. If we are to succeed we need each and every one of you to stand bravely and defiantly with us. To declare “never again will fascism draw breath”. The time has come to cast aside all ballots, petitions, and idealistic fantasies and prepare for struggle. Today, we salute you as bold and fearless comrades in that tireless struggle against the fascist leviathan.

SMASH REACTION ALL ALONG THE LINE!

DOWN WITH THE ALT-RIGHT AND TRUMP!