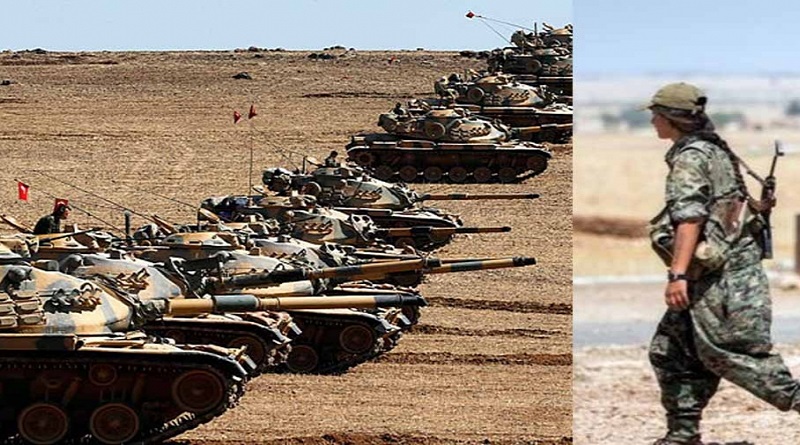 The Turkish Army announced the death of 291 Kurdish fighters of the People’s Protection Units (YPG) during military operations in northern Syria.

The death toll, declared by Turkey on 7 January 2017, included Kurdish casualties since Turkey launched its operations in Syria last August.

The Kurdish YPG leadership condemned Turkey’s attacks on their positions, arguing that Turkey’s offensive on their headquarters came in support of jihadist groups in Syria.

The Turkish Central Command said in a statement on Saturday that its military forces and allies aim to secure Turkey’s southern borders through eliminating “all terrorist groups in northern Syria, including ISIS and YPG”.

This while the YPG leads a key US ally against ISIS in Syria, namely the Syrian Democratic Forces (SDF).

On August 24, the Turkish Army and allied rebels in Syria launched the so-called Euphrates Shield Operation under the pretext of combatting terrorism. However, Kurdish politicians and activists said that Turkey’s intervention in Syria was mainly aimed at attacking the Kurds, namely the YPG and the Kurdish-led SDF.

According to analysts, the immediate goal of the Turkey-backed operation in northern Syria is to preempt Kurdish territorial ambitions by capturing the ISIS-held areas between Efrin and Manbij.

Military sources told ARA News that the Turkish Army has launched dozens of attacks on Kurdish positions in northern Syria in 2016.

In Kobane, Kurdish headquarters have been exposed to several Turkish attacks. On December 30, the Turkish military shelled with heavy artillery YPG security offices in the villages of Yabsa, Kerbnav and Seloula east of Kobane. This coincided with Turkish air raids on the YPG-held village of Khane.

On June 5, Turkey’s military hit Kobane city with four shells, bombing residential houses. The Turkish army forces, stationed on the border with Syria’s Kurdish region, targeted the districts of Khikhire and Tarmik in southeastern Kobane. “Four artillery shells hit Kobane coming from the Turkish side of the border, causing destruction of several houses,” eyewitnesses told ARA News in Kobane. It was not immediately clear how many casualties fell in the Turkish bombardment.

In August, video’s published on the internet showed pro-Turkish Euphrates Shield Brigade rebels saying they would march towards ‘Ayn al Islam’, the ISIS name for Kobane.

On November 20, Turkish forces launched air raids and artillery strikes on positions of the Kurdish-led Syrian Democratic Forces’ (SDF) near Manbij city. The SDF sustained a handful of casualties and their local headquarters was damaged. Turkey’s military bombed the villages of Yilanli, Qurt Weran and Sheikh Nasr. Sharvan Darwish, an SDF spokesperson, said in a statement that at least four fighters were killed or injured.

On November 12, Turkey’s military shelled Kurdish communities in Afrin District, north of Aleppo city. Dilovan Mirkhan, a human rights activist, told ARA News that Turkey struck Afrin with dozens of artillery shells. “The Turkish Army –stationed on the border with Syria– bombed residential buildings in the Mosako town, in Afrin,” he said. At least eight Kurdish civilians were killed and 19 others wounded in the attack. Mirkhan said that the bombardment also leveled a large number of civilian homes. Also, on September 23, Syrian Kurdish forces of the People’s Protection Units accused Turkey-backed rebels of targeting their positions in the village of Merenaz in Afrin District. “Supported by Turkey, Syrian opposition factions launched an offensive on our units in the village of Merenaz, in Afrin,” the YPG General Command said.

On October 19, Turkish military and allied rebel factions launched an offensive against the Kurdish People’s Protection Units (YPG) in Syria’s northern Aleppo Governorate. Turkish heavy artillery and mortar batteries shelled a line of YPG positions stretching from Tel Rifat to Hassadjek Mountain. A YPG officer told ARA News that at least 12 YPG fighters were killed and more than 20 others were injured.

On October 12, the Turkish army bombarded a YPG security office near Tel Abyad, east of Kobane. The Kurdish forces responded to the fire by launching artillery shells at Turkish Army installations near the Syrian border. It was not immediately clear whether the YPG bombardment caused any casualties.

On September 28, at least nine civilians were killed and several others wounded in a Turkish artillery attack. The shelling occurred in Kahila, a Kurdish town near the Syrian border city of Tel Abyad.

The Kurdish YPG and their allies from the Syrian Democratic Forces (SDF), captured the strategic city of Tel Abyad in June 2015. The conquest of Tel Abyad was disconcerting for Islamic State (ISIS) militants due to its location. Tel Abyad is only 90 km from Raqqa –the group’s de facto capital in Syria. Since ISIS was driven from Tel Abyad, Kurdish positions have been exposed on two fronts. The YPG has to guard against Turkey’s military on one hand, and ISIS on the other.

“Before the YPG-SDF retook Tel Abyad from ISIS in early 2015, the terror group used to export its oil tankers through this border crossing to the black market,” Osman said. “When ISIS was in control here, Turkey never attacked the group’s positions. Now that Tel Abyad is under Kurdish control, the Turkish Army continues to attack the area.”

Kurdish officials also accused Turkey of having gained millions of dollars from oil trade with ISIS in the past through Tal Abyad border crossing. “30 million dollars monthly,” YPG official spokesman Redur Xelil said in an earlier statement to ARA News.