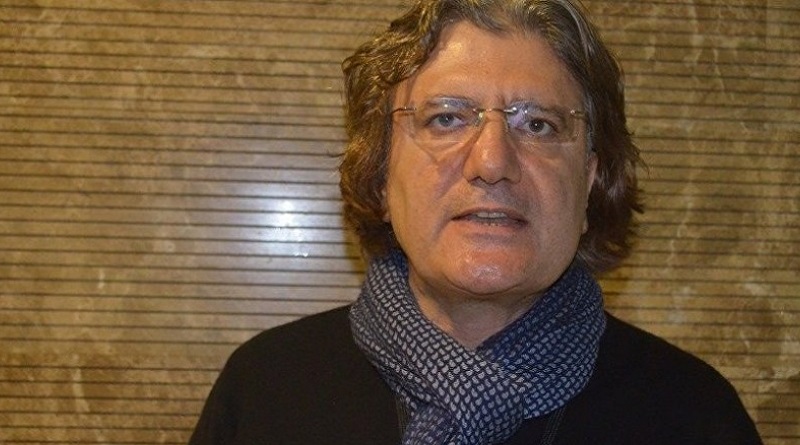 An academic who was expelled from his position on accusations of being a supporter of the ‘PYD [Democratic Union Party] terrorist organisation’ after cricitising Turkey’s Jarablus intervention, says the Turkish government used him to create a precedent so that more academics could be removed from their university positions.

Naif Bezwan gave lectures at the International Relations Departmentat in Mardin Artuklu University until an interview in which he expressed his concerns about the Euphrates Shield operation being largely against Kurdish gains in Syria was published.

‘London is my second exile’ says Bezwan, adding that he first migrated to Germany in 1991.

F.G: Since the attempted coup what has changed in the Turkish governmental system?

N.B: The current state of affairs can best be understood with reference to Young Turks, the ultra-nationalist Committee of Union and Progress (Ittihat Terakki), coming to power in 1908. A neo-Ittihat ruling bloc is currently taking form. The main aim of this coalition is to eliminate all expressions of democratic opposition and instigate genocidal attacks against Kurdish parties and people both domestically and at a regional level. At the heart of this power grab and political theology stands the president Recep Tayyip Erdogan. But it also includes all the shadowy forces of Turkish politics. Militarism, ethnic nationalism, intolerant religious outlook and geopolitical expansionism prove to be the main compotents of this decidedly authoritarian project.

F.G: At a time when Kurdish politicians are under huge pressure, a referandum vote is looming. What will change if the yes vote wins?

N.B: An old (new) regime will be installed through the referandum if it’s voted yes. There are in fact some striking parallels between the proposed amendments to the constitution and the Ottoman Sultanic Kanuni Esasi (Basic Law) of 1877 in terms of the Sultan’s powers and the powers of the president. The projected regime is kind of a summary of all dictatorial periods of the late Ottoman and the early Republican eras: from the Young Turks period to Kemalist one-party state rule in the 1930’s to the long periods of military rule. It is impossible to legitimize these proposed changes in terms of a democratic constitution-making and theories of democracies.

Surely, Turkey and its peoples need a new and democratic constitution more than ever. But the projected system will be at best a dsyfunctional illiberal regime, or more likely, a constitionally entrenched presidential dictatorship. So the imposed rejime has nothing to do with an American or French type of presidential system, but rather is reminiscent of a ‘Führer-system’. It is about a more centralized and unitary system with the president as its focus. The Kurds are seen as the greatest threat to such a regime, thus they need to be silenced and supressed.

F.G: If voted yes, what would be the likelihood of finding a solution to the Kurdish question within Turkey’s current borders?

N.B: Historically, we can see a clear link between policies of supression against the Kurdish people and periods of dictatorial rule over Kurdistan. So Kurds have for example suffered the biggest tragedies under Saddam’s one-party state in Iraq and under Kemalist one-party state in 1930’s. It will be utterly foolish and manipulative to suggest that there would be some ameliorations concerning a peaceful settlement of the Kurdish question by providing Erdogan with more powers. All forms of self rule, from autonomy to federalism, are only possible within democratic frameworks. If amendments to the constitution are approved in the referendum, the prospect of finding a democratic solution to the Kurdish question will recede into the distance.

The Turkish Republic since its inception tends to create parallel structures within a unitary system. The formal and informal structures are two sides of the same coin. What nowadays is designated as the ‘parallel state structure’ by the president is nothing less than an inherent character of the Turkish state itsel. Strongly centralized political systems tend to generate their deep state structures due to checks and balances being non-existent as opposed to democratic power sharing arrangements.

So the AKP government on one hand appears keen to liquadate the “parallel state” of the Fethullah Gulen movement, but on the other hand is forming a new parallel state, composed of elements of the old deep state, otherwise known as Ergenekon. They are now allied with Erdogan to eliminate democracy and Kurdish political actors in Turkey and Syria – while the Kurdish Regional Government in Iraq is not exempt either. As long as these forces remain in power, it would be naive to expect any political and peacaful solution to the Kurdish issue. The proposed system would provide this structure with a constitutional underpinning.

F.G: Do you think Kurds’ perceptions have changed after the urban warfare in Turkey’s southeastern Kurdish region?

After the June election it was clear that Erdogan’s government would do everything to reverse the process. Kurds were exposed to war. The problem is, the Kurdish movement, although being well aware of this, was not able to offer an alternative to the dirty war imposed by the government. Responding with trenches was not a proper political initiative. The state security forces destroyed cities and thousands of innocent lives in Kurdistan, while Kurdish actors once again were labeled by the government as ‘terrorists’.

The sheer use of the term “trench” generates a polarizing effect, creating a vicious circle. It is not appropriate for promoting a desperately needed constructive debate. The question is not so much the trench, but rather: Why were Kurdish political actors not in a position to preempt the relentless impositon of war by taking political initiatives at the height of their historical successes. This question is worthy of debating publicly. But we need to find out ways and explore this sensitive issue beyond the meaningless dichotomy of ‘traitors’ and ‘heroes’.

Kurds alienated to their own movement

F.G: In 1990s there were large rallies in the South East of Turkey. Do you sense a desperation? Why in places like Cizre where people were burned alive, do we not see mass protests?

N.B: Kurdish society in no way supports the state’s brutal campaign which destroyed thousands of lives and displaced tens of thousands of people. Even the much vaunted common Islamic bonds between Kurds and Turks threaten to lose their cogency due to a dirty war of destruction against Kurds. The irony is that what Kemalists did not manage to destroy within 80 years, an Islamic government has delivered just in a couple of years.

However, this does not necessarily mean that the same Kurdish society was sympathetic to the urban warfare in which the Kurdish movement was involved, or perhaps more precisely, compelled to be involved. As someone who lived in Kurdistan during this period, you could sense alienation towards mainstream Kurdish politics on this particular point. When the movement you feel strongly attached to acts without taking your circumstances into consideration, the consequence will be depolitization and demoralization.

Trenches or city warfare were perceived as not being reasonable by large segments of Kurdish society. This seems to be the main cause of the alienation. Because the Kurdish movement did not properly explain to the Kurdish public at all why urban fighting started wha it has to do with their rights and liberation.