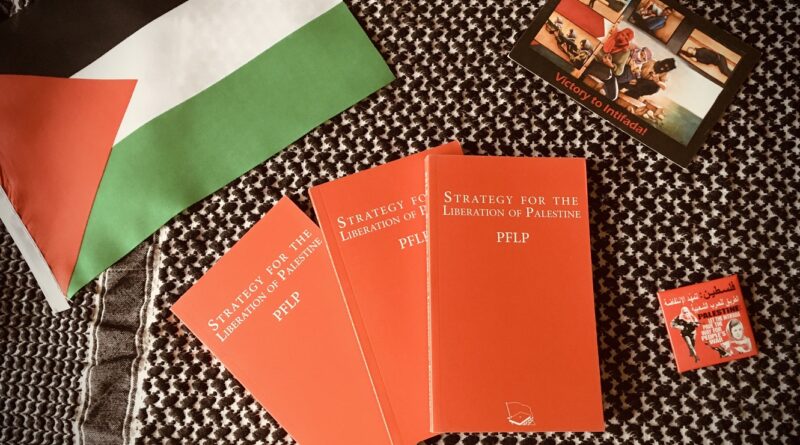 This new introduction by comrades of the PFLP was released in the first edition of the French translation published in April 2021 by Foreign Languages Press.

Introduction to the French Edition

The united concept of politics and action of the “Strategy for the Liberation of Palestine” meant that it was more than a political document for the movements that received its call at the time of its publication in 1969 and makes it just as relevant of a guide to action today.

The analysis of the Palestinian movement as a Palestinian, Arab and international cause and a clear understanding of the range of enemies directed against the Palestinian people: Zionism, imperialism, the Israeli state and Arab reaction, motivated internationals engaged in these struggles in France, Belgium, throughout Europe and around the world to join the Palestinian cause, often but not solely with the Popular Front for the Liberation of Palestine, to become part of that fight. International revolutionaries flocked to the Palestinian refugee camps in Lebanon to join the cause, opening medical clinics, designing posters and writing materials for their home countries, and joining the battle directly.

Similarly, within the framework of Wadie’ Haddad’s dictum, to be “behind the enemy everywhere,” Palestinian and Arab fighters vowed to continue the battle in Europe, whose colonial projects were responsible for the Zionist colonization of Palestine, the dispossession of the Palestinian people and the occupation of Palestinian land.

Haddad, born in 1927 in Safad, Palestine, was one of the co-founders of the Arab Nationalist Movement and later the Popular Front for the Liberation of Palestine, with his fellow medical student at the American University of Beirut, George Habash. He was one of the creators of the international armed struggle strategy of the PFLP, including the hijacking of airplanes.

These were not operations designed to create “terror” through killing and injury, but to upend the framework in which the oppressed are constantly vulnerable to all forms of attack, dispossession and destruction while the oppressor is able to sit comfortably without fear. They further indicated that the Palestinian revolution could materially bring the battle to the imperialist core, as it was already clear that imperialism could bring its military might down upon the Palestinian people.

This was a time of burgeoning struggle at a global level. Algeria had defeated French colonialism and Vietnam was in the process of defeating French and then U.S. imperialism. In France, Belgium and elsewhere in Europe, revolutionaries were willing to bring this battle to the streets of their countries, while Arab revolutionaries joined them to do the same.

The international revolutionaries that joined the Palestinian struggle were not only European; Patrick Arguello was a Nicaraguan American and a member of the Sandinista Front who joined with Leila Khaled to hijack an El Al flight. The Japanese Red Army viewed their involvement in the Palestinian armed struggle as part and parcel of their efforts to build a revolutionary movement in Japan. The Palestinian and Arab movements fought together from Bahrain to Oman to Morocco to occupied Palestine for Arab liberation.

This is not only a matter for history, one reason why the Strategy for the Liberation of Palestine remains such a vital document today. Despite the vast changes in international alignment, the domination of imperialism and the attempt to create a unipolar world, the analysis and understanding of the struggle for Palestine laid out in the Strategy is just as sharp and relevant as it was at the time of its publication.

The international actions of the PFLP were designed to intervene in and disrupt the balance of power and economic strength in the hands of the US, Israel and European imperialist powers. Despite their dramatic nature, these were not individual in nature but expressed a collective revolutionary organization with a clear political and social framework and demands, just as that same organization guided revolutionary struggle inside and on the borders of Palestine, mass organizing, and political movements. While many of the revolutionary organizations that spearheaded that struggle were subjected to vicious repression and state attacks, the lessons of their history and the potential they contain for renewed organizing and struggle in France, Belgium and elsewhere remain vital.

The case of Georges Ibrahim Abdallah is one paradigmatic example. This Lebanese Communist struggler for Palestine has been jailed in France for over 36 years. Abdallah, a Lebanese citizen from the village of Qoubayat, is the longest-held political prisoner in Europe. As a young teacher in Lebanon, he was involved from an early age in political activity to support Palestinian refugees and their struggle to liberate and return to their homeland, Palestine. He joined the Popular Front for the Liberation of Palestine in the refugee camps in Lebanon and fought in the ranks of the PFLP against the Israeli invasion of Lebanon in 1978.

As a committed Communist and internationalist, Georges Abdallah viewed the Arab liberation struggle from Zionism and imperialism as a central part of the international workers’ struggle for liberation from capitalism. He was one of the co-founders of the Lebanese Armed Revolutionary Faction (LARF), formed to fight off U.S., French, Israeli and other imperialist attacks on Lebanon. In France, Lebanon’s former colonizer, the LARF continued the struggle in Lebanon against the Israeli invasion and far-right military organizations backed by imperialist powers. LARF operations targeted U.S. and Israeli military officials planning and leading the invasion and bombardment of Lebanon.

In 1982, the deputy US military attaché at the US Embassy in France and an Israeli embassy official were killed in LARF operations. Georges Abdallah himself was not accused of participating in the operations himself; in the end, he was convicted of “complicity” in these operations. He was seized in Lyon in 1984 by French police, who accused him only of carrying a forged Algerian passport. In 1985, the French government agreed to a prisoner exchange in Algeria for a captured Frnch diplomat. Instead, however, the French official was released — and Abdallah remained behind bars. His lawyer was in fact working for the French state intelligence service and reporting on him to the highest levels of the state. The charges against him were revised before a special court was opened in Paris in 1987 to hear his case, in which the United States was given special status as a civil party.

“If the people have not entrusted me with the honour of participating in these anti-imperialist actions that you attribute to me,” Abdallah told the court at the time, “at least I have the honour of being accused of them by your court and of defending their legitimacy in the face of the criminal legitimacy of their executioners.” While the prosecutor in the case recommended a 10-year sentence, Abdallah was instead sentenced to life in prison at the request of the United States’ official representative in court.

Under French law, Abdallah has been eligible for release since 1999, but the French state has refused repeatedly to release him and return him to Lebanon, where he remains a heroic figure across generations. Between 2004 and 2020, nine requests for his release were rejected. In 2012, his release and deportation to Lebanon was approved by the court, only to be blocked by the joint action of the French and U.S. imperialist powers. U.S. Secretary of State Hillary Clinton called the French minister of foreign affairs to demand Abdallah remain behind bars, and Interior Minister Manuel Valls refused to sign the order for his deportation.

Behind bars, Georges Abdallah has retained his commitment to the revolutionary struggle and the Palestinian cause. He delivers statements and speeches to actions and events in Lebanon, Palestine, France and around the world, which continue to evince his profound revolutionary commitment to Communist struggle, anti-imperialism and the oppressed of the world. In fact, his continuing refusal to retreat from his clear political convictions is a key factor in his ongoing imprisonment. France and its partners, the United States and Israel, seek to imprison the ideas of Georges Abdallah and the legacy of the revolutionary movements that swept the continent in the 1970s and 1980s by keeping him behind bars. However, the movement for Abdallah’s liberation continues to grow, with the annual demonstration in Lannemezan for his release becoming larger and larger each year.

He continues to apply the analysis of the Strategy for the Liberation of Palestine and express his commitment to resistance and anti-imperialism, remaining a leader in the Palestinian, Arab and international movements even in French prisons and refusing to trade his commitment for his freedom. He has joined multiple hunger strikes of Palestinian political prisoners in Israeli jails from his prison in Lannemezan and, in line with his internationalist commitments, joins the struggles of political prisoners and hunger strikers in Turkey, Greece, Morocco and the Philippines.

For the movements today in France and Belgium that take to the streets fighting racism, police violence, exploitation, imperialism and injustice in all of its forms, the leadership of Georges Abdallah, the legacies of his comrades, and the analysis of the Strategy for the Liberation of Palestine remain essential. Reclaiming this legacy in practice is not only an option, but a necessity, which situates the Palestinian struggle firmly among the internationalist movements that united the revolutionaries of Europe and the Arab region in the 1980s and 1980s to fight colonialism, imperialism and capitalism. Whatever tactics revolutionaries adopt today in their liberation struggle, these analyses and lessons are vital to strugglers today seeking to understand, organize, resist and achieve victory.

Comrades of the Popular Front
for the Liberation of Palestine