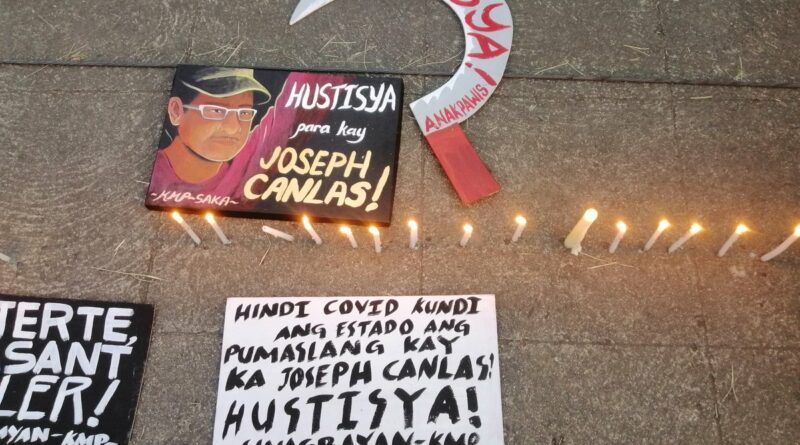 Canlas died from a stroke weeks after he was arrested and thrown into jail. He had diabetes and suffered from hypertension. He was tested positive for Covid-19 infection. He was 59.

CPP Chief Information Officer Marco Valbuena condoled with the family and colleagues of Canlas whom he lauded as an outstanding peasant leader in Central Luzon. Canlas chaired the Alyansa ng mga Magsasaka sa Gitnang Luzon (AMGL). A broad range of peasant organizations, environmentalists and progressive and patriotic leaders and organizations all praised Canlas for his long service to the cause of the peasant movement.

Valbuena said the NTF-ELCAC and the Duterte fascist regime was responsible for Canlas’ death having subjected the AMGL and other legal mass organizations to relentless anti-communist witch-hunting and causing his unjust arrest and detention based on false charges. The NTF-ELCAC, an overbearing government agency led by Duterte and his inner circle of former military generals, is notorious for red-tagging mass organizations and opposition forces to make them targets of armed suppression by the military and police.

Police and courts rejected appeals of his lawyers and family to be allowed access to medical facilities. He was detained in cramped jail conditions despite his poor health which made him prone to Covid-19. It was too late before he was brought to the hospital where he was immediately connected to a ventilator.

Valbuena said the untimely death of Canlas rouses the anger of the peasant masses of Central Luzon and the Filipino people. “The broad masses of the Filipino people are ever determined to fight the fascist regime and end its reign of state terrorism against the people.”