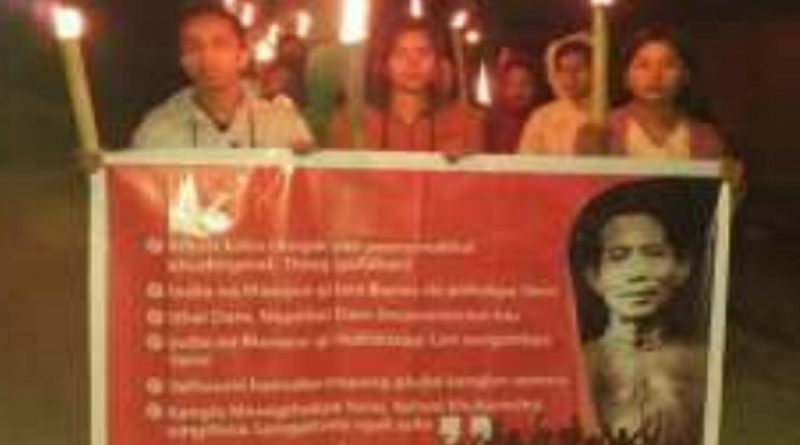 In an expected move, student body Socialist Students’ Union of Manipur (SSUM) organised torch rally at different parts of the state at a similar time with similar demand. As per report the rally participated by nearly 500 women each at around hundred localities and villages including some at Imphal city call on for complete prohibition of illicit alcohol and drugs, decommissioning of the Mapithel Dam, immediate action to retrieve the land encroached by the Myanmar, framing of a policy for protection of the Indigenous people of the state, immediate halt to any kind of extraction of Mineral resources, protection of the sanctity of Kangla and also for preservation of all indigenous ritual locations of the state.

This reporter seen hundreds of women folk with banner with the photo of Lamyanba Hijam Irabot along with the demand with torch on their hand marching at Singjamei, Keishampat, Sagolband, Thoubal etc. The rally seem to be well organised that there are also report of similar mass rally carrying the same banner at many parts of Bishnupur district, Kakching district, Thoubal district, Imphal East and Imphal West district.

A statement of the SSUM said that rally organised yesterday evening is just the beginning and they are moving ahead with more such agitation until their demands are fulfilled.

“On Dec 12, we are organizing a mass rally at all parts of the state to mark the Nupi Lal day at 7.30 pm”, the SSUM statement signed by Bhusan Longjam said. The SSUM statement also demand Rs. 50,000/- for farmers who are facing draught and also Rs. 10,000/ – each to Zhum cultivators of the Hill district. While this demand will be in addition to yesterday demand the Dec 12 rally will also demand removal of the Assam Rifles from the Manipur University Complex.