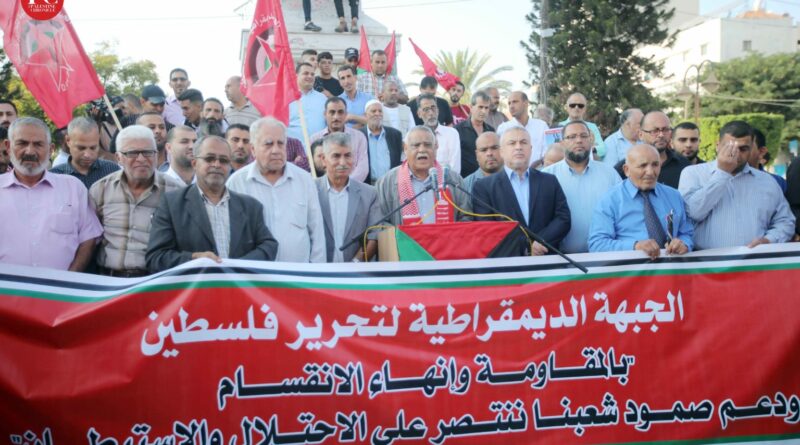 Gaza City, October 25, 2022: The Popular Front for the Liberation of Palestine organized a rally in Gaza in support of Palestinian resistance in the West Bank and occupied Jerusalem.

A member of the Political Bureau of the PFLP in the Gaza Strip, Saleh Nasser, affirmed that the Palestinian people chose the path of resistance in all its forms against the Israeli occupation.

“Our people are subjected to collective punishments, abuse, cold-blooded executions, arrests and demolition of homes in all cities of the Palestinian West Bank and Gaza Strip,” Nasser said.

“This is an open war that escalates daily in the worst forms of persecution and fascist racism, as well as in the implementation of policies aimed at the ethnic cleansing of the Palestinian population, in flagrant violation of international and humanitarian law.”

Also organized by the PFLP, a symbolic funeral was held in Gaza on Monday to mourn Tamer Kilani, one of the leaders of the Nablus-based resistance group Lions’ Den.

Thousands participated in the funeral, which was organized by the Abu Ali Mustafa Brigades, the armed wing of the PFLP.

Another influential member of the Political Bureau of the PFLP in Gaza, Mahmoud al-Ras, said that organizing the funeral in Gaza “is a confirmation that we are one people and that our destiny is one.”

Al-Ras stressed that “the path of resistance is a path towards unity against the occupation.”

Tamer Kilani was killed on Sunday when an explosive device exploded in the Old City of Nablus.

The following day, five other Palestinians, including top Lions’ Den commander NAME, were also killed in Nablus, and sixth Palestinian in Ramallah.