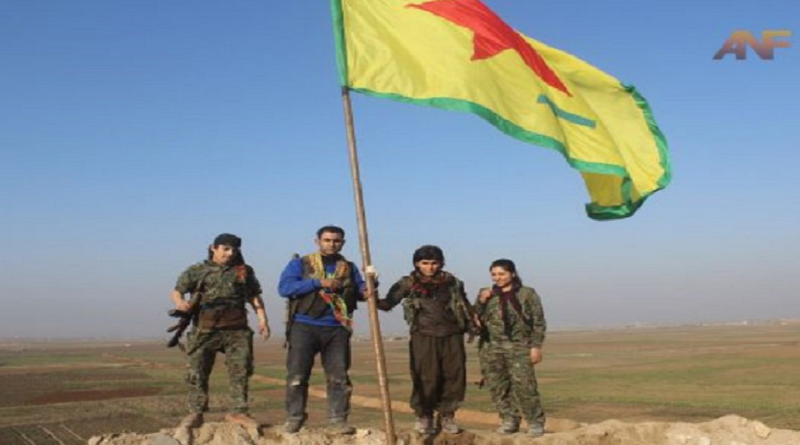 It is the second year anniversary of Kobanê Resistance’s defeat of ISIS. The biggest resistance in the history of Kurdish people’s freedom took place in Kobanê. Fascist ISIS gangs were defeated in Kobanê after a resistance mounted in every neighborhood, street, house and even room for months. Until Kobanê, states and armies fled the battle front when they heard the name of ISIS. However, fighters of Kobanê resistance defeated ISIS despite the fact that the gangs had better technical equipment and nearly ten times more fighters. Kobanê Resistance marks the downfall of ISIS, which has lost its prominent fighters during the siege of Kobanê. Kobanê Resistance broke the will of ISIS.

Fighters of Kobanê Resistance defeated ISIS with the morale they got from their ideology and political perspective. The ideology and mentality of ISIS was defeated in Kobanê. The democratic consciousness and passion for freedom crushed ISIS’ fanatic and brainwashed mentality of suicide. ISIS, which would intimidate everyone until then, was forced to flee in the face of Kurdish People’s Leader’s social libertarian and democratic political mentality. ISIS lost almost every fighting it engaged against the Kurdish Freedom Movement. If Turkey had not prevented it, Bab also would have already been liberated by Syrian Democratic Forces that includes the YPG.

Kobanê Resistance proved that a movement that has the support of peoples and humanity could not be defeated. When Tayyip Erdoğan said “Kobanê is about to fall,” the October 6-7-8 uprising in support of Kobanê brought him to the brink of losing his power. He saved his power by begging Kurdish People’s Leader and the Kurdish Freedom Movement. The Interior Minister and other AKP ministers begged HDP parliamentarians to end the uprising because Kurdish youth had taken many city and district centers in North Kurdistan under their control during the October 6-7-8 uprising.

The daily support given by thousands of people on the Suruç border has been one of the main sources of strength for Kobanê Resistance. The democratic forces, revolutionaries, labor organizations, women’s organizations, youth organizations, Alevis, Assyrians, Armenians, Circassians and other groups came together near the Kobanê-Suruç border to support Kobanê Resistance. The people of Suruç welcomed and hosted tents of thousands of protestors. Suruç made history and transformed itself during this period. The heart of the North Kurdistan people beat with the Kobanê Resistance. Peoples’ uprising brought victory to Kobanê and the resistance enhanced the people’s patriotism and desire for freedom and democracy.

Kobanê Resistance had fighters such as Arin Mirkan, Diyar Bagok, Destan and Viyan that sacrificed themselves and said “an Apoist fighter does not abandon position until the last bullet.” Of course, this spirit is invincible and will not be defeated. Kobanê Resistance showed the strength of commitment and ideology, which determine the result of a conflict. Kobanê Resistance has around a thousand valiant martyrs and a few thousand veterans, who confronted and defeated ISIS with devotion in the battle field.

Now, many states and political powers have the courage to fight ISIS. Even Turkey, which had supported ISIS for many years, is now claiming to be fighting ISIS. However, only guns cannot defeat ISIS. Only strong ideologies and political mentalities can defeat ISIS. Those that reflect upon the victory of freedom fighters that have the mentality of democratic socialism are mistaken to say that they themselves too could defeat ISIS. A mentality lacking the ideology of liberty and democracy cannot defeat ISIS with technical war-power only. Rojava Revolutionaries and the Freedom Movement led by the PKK defeated ISIS with their ideologies. Therefore, only those with freedom fighters can defeat ISIS.

If it were not for Rojava Revolutionaries and the PKK, ISIS would have invaded Syria, Iraq and South Kurdistan by now. ISIS was such a wave that no force could stand in front of it. However, it lost its magic and power when the ideological and political mentality of the Kurdish People’s Leader stood against it. Defeat was inevitable for ISIS’ strength and deviant and fanatic mentality when it encountered the ideology of freedom fighters that has the values, morals, conscience and justice of humanity.

Whoever wants to fight and get results against groups such as ISIS has to have the Kurdish Freedom Movement’s ideological power and passion for freedom, democracy, justice, conscience and equality. Otherwise, those that rely on the power of guns and technique can be defeated even when they think that they are victories.