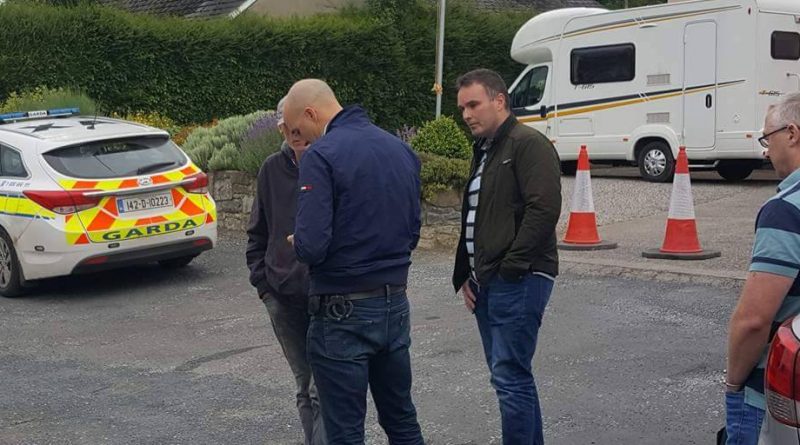 Earlier this evening, Irish Socialist Republicans successfully prevented attempts by the British Legion to stage a concert in Knocklong.

Despite a ring of steel around the Knocklong Community Centre, consisting of the Free State Armed Response Unit and Special Branch, Republicans from Limerick, Tipperary and Cork successfully prevented the pro- imperialist event that had been organised by the Knocklong History Society.

Speaking after the event, George McAnaspie said, ‘The success of tonight’s protest is a massive victory for socialist republicans in the Munster area. The organisers of this event had hoped to facilitate a Brit Imperialist Band in an effort to portray the ongoing British occupation of Ireland as legitimate. The fact that the event had to be cancelled, despite the ring of steel, due to a protest by local republicans, shows beyond any doubt that there is nothing legitimate or normal about the British Occupation of Ireland.”

George continued “The British Legion are not just an innocent Brass Band or a Charity. They are active supporters of the British Military and key fundraisers in support of Brit forces involved in wars of conquest around the world. Left unchecked, events like the concert in Knocklong could become subtle recruiting grounds for the Brit Army in Ireland and therefore must be opposed”.

George concluded “Tonight’s successful protest in Knocklong demonstrates what is possible when republicans get organised and stand together in a determined and disciplined way. Tonight’s protest demonstrates that it is possible to challenge Imperialism’s normalisation agenda and win. Now is the time for socialist republicans across Ireland to be working together to build a movement that can successfully challenge imperialism in Ireland on terms of our own choosing. Let the message go out loud and clear from Knocklong, Brit Imperialists are not welcome in Ireland and will be challenged.”