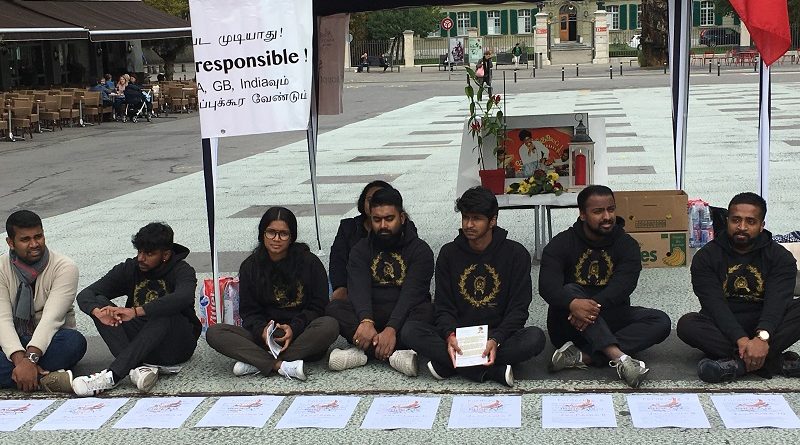 The spirit of Eezham Tamil national struggle was given a gust of life through the remembrances held in the occupied homeland of Eezham Tamils this week as the people from all walks of life gathered in their hundreds commemorating the resolve and sacrifice made by Lt. Col Thileepan, who sacrificed his life exposing the Indian geo-political agenda in 1987. The political message coming from those who were addressing the Nalloor event was based on Thimphu-principle centred federal discourse. They were also seen urging the Tamil diaspora to adopt the unworkable ‘federal’ demand on the ground to counter the ‘unitary’ paradigm of genocidal Sri Lanka. However, new grassroots Tamil organisations in Tamil diaspora have awaken to the realities and expressed their resolve towards Vaddukkoaddai Resolution based Tamil sovereignty struggle, particularly at the federal State of Switzerland.

For the first time, Tamil younger generation in the Diaspora has also taken a bold step by upgrading the LTTE introduced verse of remembrance by mentioning the fallen Tamils as those slain by the Indian, US and Chinese abetment of genocidal Sri Lanka. 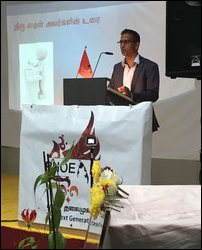 Instead of emotionally captivating the participants with dramas, dances or burden-dances, the diaspora youth were promoting discussion on the topics of geopolitics, Tamil aspiration of sovereignty, ongoing dimensions of genocide and on discussing the messages articulated by LTTE’s Political Head in Jaffna during his 12-day hunger strike.

After 1987, Eezham Tamils have been facing the paradigm of bandwagoning by the West.

The discourse of the West was much more sophisticated than New Delhi’s crude exploitation of Tamils’ plight in the island. The nation of Eezham Tamils was brought to Mu’l’livaaykkaal primarily by the West tilting the parity of status and power of balance militarily achieved by LTTE in the battlefield to the favour of genocidal Sri Lanka during the Norway-brokered peace talks between 2001 and 2006.

Spending millions of dollars, the West deployed international peace-facilitation and transnational counterinsurgency against the freedom movement that was spearheading the democratically mandated sovereignty aspiration of Eezham Tamils.

After 2009, Geneva-based discourse was attempting to bring the investigation of international crimes into the legal domain of genocidal territorial integrity of Sri Lanka.

Now, a constitutional discourse of unitary and undivided ‘Sri Lanka’ is staged with the aim of obtaining Tamil mandate to the genocidal State formation in the island.

This UNHRC based war-crimes discourse, which was refusing to look at the genocide against Eezham Tamils was also programmed right from the beginning to negate Tamil sovereignty and Eezham Tamils’ right to Self-Determination.

This has been clearly brought out straight from the horse’s mouth in Louise Arbour’s Carnegie Council address on 22 September 2010.

Arbour, a former Puisne Judge of the Supreme Court of Canada, became the UN Human Rights chief (2004 – 2008) and then the president and the CEO of the International Crisis Group (2009 – 2014), which was in the forefront in denying the genocide committed on Eezham Tamils.

Instead of searching for ‘natural allies’ among their adversaries, Eezham Tamils should walk along unhijackable path of Tamil sovereignty based political struggle, the activists in Switzerland said.

The events in Switzerland have been joined in solidarity by activists from Tamil Nadu and involved virtual participation of activists from the occupied homeland.

Despite the fact that Indian and Western intelligence outfits have infiltrated the diaspora structures at various levels, alternative sections amongst the second generation of Eezham Tamils, Tamil Nadu and the grass-roots are grasping the geo-political dimension of the Tamil struggle.

The memorial event at Bern, Switzerland, was convened by the youth movement, named Phoenix: The Next Generation, and was joined by Tamil diaspora grass-root activists. Eezham Tamil lawyer and activist Lathan Suntharlingam partook at the event delivering a speech.

“Whoever stands in front or behind the Tamil Eelam national flag should be ready to clearly articulate the ideology and theory behind the praxis of our national liberation struggle, which was waged to safeguard Tamil sovereignty and which was defended by our national leader. There is no commitment to the struggle without a commitment to the ideology of the struggle. The ideology is the principle of Tamil sovereignty. The waving of the mere flag cannot obfuscate this fact,” Mr Suntharalingam said in his address.

He also elucidated the course of actions undertaken by the Indian establishment in hijacking diaspora, and the individuals who front as LTTE sympathisers, but who are operating within the frame of the geo-political interests of New Delhi, its strategic partners and their intelligences.

Lathan denounced the attempts by certain elements in India, to rally Eezham Tamil literary figures, to align with the Hindutva orientation of the BJP central government, saying that it’s non-compatible, and amounts to attempts to hijack the Tamil secular national revolutionary struggle.

“We have to continue our practical struggle, based on the theory which arises from the revolutionary praxis of our struggle. There is no Tamil Eelam activism without this ideology being its guidance,” he said.

The participants in the event at Bern, renewed some of the demands put forth 30 years ago by LT.Col Thileepan, by calling for end of occupation and colonization of the Eelam Tamil homeland, release of all Tamil political prisoners.

The demands included the conditions of the contemporary, by calling for international investigation into the genocide committed and being committed against the Eezham Tamil nation, and the external backers of such an oppression maintained by the unitary state of Sri Lanka. The demand for a referendum alongside the last-ever democratically mandated Tamil aspiration from the Vaddukkoaddai Resolution. Some of the demands were also addressed to counter the bandwagoning of Swiss Establishment.

“After the so-called independence in 1948, all the constitutions enacted in Ceylon or Sri Lanka did not receive the democratic mandate of Eezham Tamils. We tried for 30 years with peaceful struggle to get our rightful place in a unified framework. But this failed because of the Mahavamsa Mindset-based genocidal ideology entrenched in the unitary State,” said Jathuram Thirumalmarukan, a member of Phoenix TNG.

“Additionally, the Tamils were targeted by a protracted genocide. To get rid of this menace, Tamils under Thanthai SJV Chelvanayakam’s leadership passed the Vadduk-koaddai Resolution to restore their sovereignty. When the democratic avenue to advance that was permanently closed through 6th Amendment, Tamils started the armed struggle and through that we earned our sovereignty,” he said.

“This sovereignty was destroyed with the background of the USA, India, the UK, China and the EU, because of their geopolitical interests and the bandwagoning. After that the genocide against the Tamils took some other forms.”

There were also events of commemoration conducted by grass roots activists in Australia, in the cities of Sydney and Melbourne.

On the 24th of September in Melbourne, a 24 hour symbolic hunger-fast was conducted by Eezham Tamil activists at the Trevor Grant Centre, a community centre committed to the work for the rights of Eezham Tamils. Youth activist Aran Mylvagnam delivered a speech at the TGC event.

There was also a demonstration on the 26th of September in Toronto, in front of the US Embassy complex, called forth by the National Council of Canadian Tamils (NCCT), and which was joined in by Eezham Tamil youth and student formations in Canada.

Despite welcoming the mobilization of solidarity to the struggling peoples in the occupied homeland, and demanding an international independent investigation and a plebiscite on Eezham, the NCCT was also contributing to the political obfuscation at large by harping on the logic that the external orchestrators of the Eezham Tamil genocide would deliver ‘justice’ to the Tamils.

It is a betrayal to spread the fallacy among the Eezham Tamil masses that Colombo was fooling the UNHRC and the International Community, young activists in Toronto said. It is rather the paradigm and the discourses pursued by the West that are fooling the Tamils, commented the youth activists.

Tamil community based organisations such as the NCCT should evolve themselves into struggle centric organisations to spearhead the struggle in a constructive manner, understanding that Tamil national question is entangled in the political counter insurgency pursued by the U.S and India, the activists further commented.

The events in Switzerland and elsewhere in the diaspora, as well as the resolve witnessed in the homeland through people struggles and commemorative events, resonate with the spirit of national resistance principled on self-organization and self-reliance for an oppressed nation to secure its sovereignty and self-determination, they further commented.