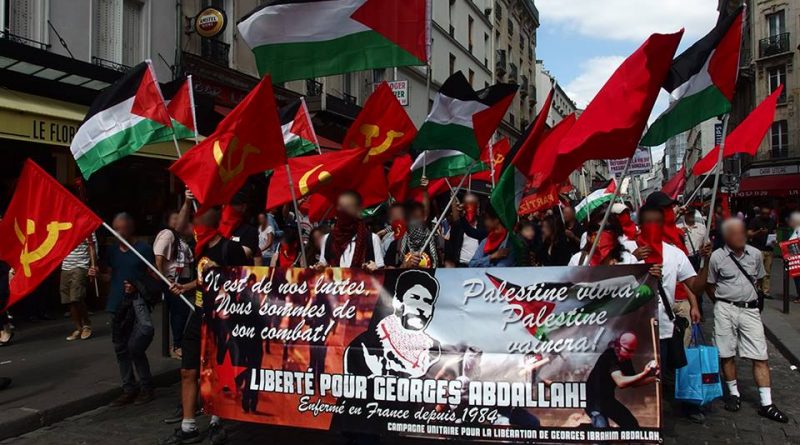 FREEDOM FOR GEORGES ABDALLAH!
HE IS OF OUR STRUGGLES! WE ARE OF HIS FIGHT!

Since 2015, when the civilian population in metropolitan France has suffered attacks, the French state has continued to amplify its repressive system on the domestic and its war machine externally. Our response to this situation must be the convergence of resistance such as: fight against imperialism and state terrorism (such as the Zionist state); against state violence (military, police, administrative), state racism, repression and fascism of the state directed against the peoples and the working classes; fight for the just and legitimate right to struggle and emancipation; fight for the liberation of revolutionary political prisoners. Georges Abdallah is a Lebanese communist activist fighting for the national liberation struggle of Palestine, incarcerated in a jail of the French State for more than 33 years. He embodies all these political struggles. This is why we say that he is of our struggles and that we are of his fight.

ABDALLAH: A LIFE OF STRUGGLE

French imperialism is deploying all its arsenal of war to establish its hegemony and preserve its interests, under the cover of the fight against terrorism. Civilian populations are massacred, displaced and their more essential rights are denied. They are for those warmongers only collateral damage. This chaos and terror is imposed on the peoples only for the benefits of strategic interests and wars of looting of imperialism. Georges Abdallah throughout his life has fought and still fights against imperialism and the wars made against the people, and in this he is fully of our struggles.

The fight of Georges Abdallah was a fight of armed resistance to defend Lebanon, his country, against Zionist aggression and for the national liberation struggle of Palestine. This struggle remains a hot topic. The Palestinian people have been resisting and fighting for over a century for their legitimate rights, for self-determination, against apartheid and imprisonment and against everyday crimes. Today, people’s resistance continues to develop under all forms of struggle possible to put an end to Zionist occupation and imperialist plans.

Against repression and for the right to revolt

Violence and state repression continue to strengthen, and even became militarized under the cover of a state of emergency currently inscribed in the Constitution: raids at any time, house arrest, preventive repression, massive custody of political opponents, mobbing for any reason, amplification of police violence, immediate and unchecked use of the right to kill given to the forces of repression, and a generalized racial profiling.

The goal is to create, under the cover of high security tension, a climate of increased fear, using the weapon of Islamophobia to channel the people’s anger against migrants, undocumented refugees, and ultimately divide the exploited when they have every interest in uniting. This harassment and repression are mainly directed against the inhabitants of the working class neighborhoods and in particular against their discriminated youth and against their activists. Against such a repressive and liberticidal state, one single word of order must be opposed: that it is right to rebel. It is this soil that also unites our struggles with the struggle of Georges Abdallah.

For the release of revolutionary political prisoners

The fight of Georges Abdallah is a fight of a revolutionary communist fighter, arrested and detained for his political struggle, that he never disavowed. His resistance is fully in line with those who today fight against the system and reject its domination over the society and the peoples. It is for his ideas of freedom that Georges Abdallah is engaged in the struggle. It is for them and his revolutionary struggle that he is still detained today. For this we demand his immediate and unconditional release. Georges Abdallah is a resistant who fought and continues to fight in jail for the emancipatory struggle of the proletariat and the peoples of the world. To fight for a world free from capitalism, imperialism and free of the relations of domination that are responsible of the misery of billions of human beings is to continue the fight of Georges Abdallah!

Let us fight to demand his liberation and thus fight for our own freedom, for our own emancipation.

In this context, we call you to join and strengthen the actions and initiatives proposed by the unitary campaign for the release of Georges Ibrahim Abdallah:

IMMEDIATE AND UNCONDITIONED RELEASE OF GEORGE ABDALLAH!
LONG LIVE THE PALESTINIAN RESISTANCE!
PALESTINE WILL LIVE! PALESTINE WILL WIN!
DOWN WITH IMPERIALISM, ZIONISM AND ARABIC REACTIONARY STATES!