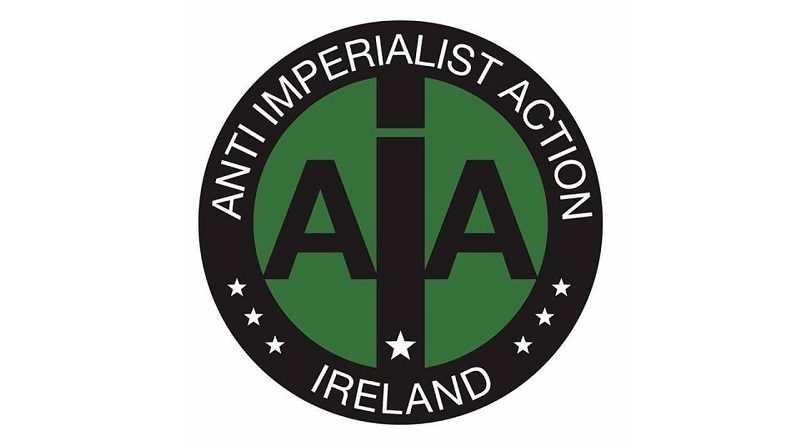 Anti Imperialist Action Ireland extends New Year greetings to all our members and supporters at home and abroad. We extend our solidarity to all people around the world who are fighting against the capitalist and Imperialist system.

In particular at this time of year, we pay tribute and extend our solidarity to all political prisoners, in Ireland and abroad, who find themselves held captive by capitalism and imperialism because they dared to struggle for the liberation of the working class. We call for the immediate release of all Irish and international political prisoners.

In Ireland, we note with extreme concern, the reintroduction of the Extradition of Irish Republican Prisoners to British controlled hell holes in Occupied Ireland, and we demand an immediate end to Extradition. The campaign against Extradition, like the campaign to abolish the use of Special Courts, is something all republicans must come together to oppose in 2018.

We take this opportunity to salute the heroic resistance of the Palestinian masses against imperialism and Zionist settler colonialism and we salute the ongoing defence of Jerusalem as the eternal capital of Palestine. We extend our solidarity to our comrades, the Popular Front for the Liberation of Palestine, who are to the fore in the struggle against imperialism and for National Liberation and Socialism.

We also extend our solidarity to the People’s Wars in India and the Philippines, and to the comrades across the world in the process of building the People’s War in their own countries.

2017 was a busy year for Irish Anti-Imperialists. Since being established, Anti Imperialist Action Ireland has been to the fore in challenging the illegal British, EU and US occupation of Ireland.

Irish Socialist Republicans organised successful protests against Brit Army recruitment events in Knocklong and against Brit Royal Visits in Dublin. The launch of our Poppy Watch Patrols ensured the Imperialist poppy was not sold on the streets of Dublin. We have also mounted regular protests against the unwanted presence of Brit warships in Ireland and continued to demand an immediate British Withdrawal from the occupied Six Counties.

Irish Socialist Republicans have also been to the fore in Challenging the EU Imperialist presence in Ireland. In launching the #Irexit: For a Socialist Republic campaign we have brought the campaign against the EU to every province in Ireland, with stickers, leaflets and stalls. This campaign will be stepped up over the coming 12 months, but we declare that there is no place for Nigel Farage or the far right in the #Irexit campaign, and any fascist elements attempting to hijack the campaign will be confronted.

Irish Socialist Republicans have been to the fore in opposing US imperialism, both its illegal presence in Shannon Airport and it’s illegal interference in the Middle East and in sovereign countries around the world. This has led to successful protests against the White Helmets in Tipperary and against the Saudi led war on Yemen in Dublin. Anti Imperialist Action Ireland is committed to building a genuine Irish anti war movement, underpinned by the principles of genuine anti imperialism.

Throughout 2017, Irish Socialist Republicans continued to organise Commemorations to remember Ireland’s Patriot Dead and to ensure new generations are inspired by the sacrifice of all those who gave their lives for Irish National Liberation. Significant events were organised in Dublin, Wicklow, Wexford and Carlow and we take this opportunity to commend the organisers.

Anti Imperialist Action Ireland was particularly honoured and privileged to be invited by the Seamus Costello Memorial Committee to assist in the organising of events for the 40th Anniversary of the assassination of one of Ireland’s greatest socialist republicans. The programme of events saw highly successful events in Arklow and Dublin, the involvement of Republicans from Belfast to Cork, the production of a commemorative T-shirt and booklet which sold out and the premiere of a 40th Anniversary documentary featuring some of Seamus’s closest friends and comrades.

Importantly, the Costello Anniversary events spread to Scotland for the first time, where the Friends of the Seamus Costello Memorial Committee Scotland organised an incredible banner in Celtic Park to honour Costello and followed this by a well attended memorial lecture and film showing in Glasgow.

Irish Socialist Republicans continued to develop a culture of revolutionary physical fitness through the Fiach McHugh/ Michael Dwyer- Starry Plough Ramblers and the launch of the Starry Plough Martial Arts Club. We believe it is the duty of all Socialist Republicans to be physically fit and to be able to defend themselves and there communities. These initiatives will be strengthened in 2018.

Throughout 2017, we continued to develop good relations with other republican and progressive organizations. We believe that the struggle for national liberation and socialism can only be successful in Ireland through the development of an Anti- Imperialist Broad Front as advocted by James Connolly and Seamus Costello, and we believe that 2018 must be the year that republicans grasp the nettle and begin work to establish such a Front. We will continue to work passionately towards this goal.

As 2018 dawns, we appeal to the Irish Working Class and to our revolutionary youth to join the struggle for National Liberation and Socialism. Play your part in rebuilding the All- Ireland Socialist Republic, proclaimed in 1916.

Dare to Struggle – Dare to Win!