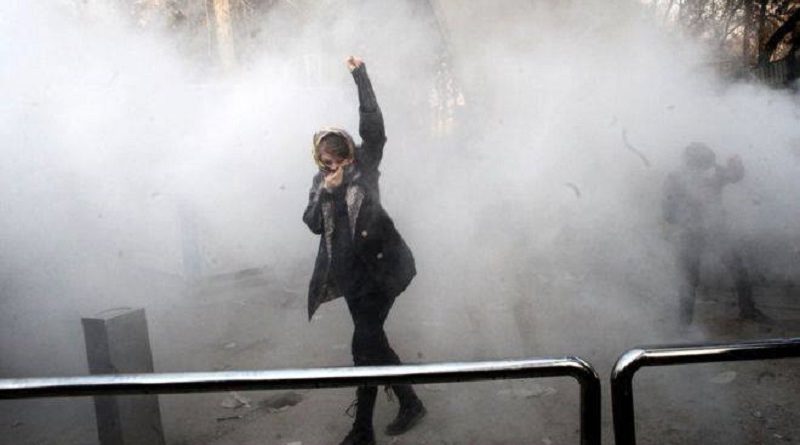 For the past four consecutive days, mass rebellion rock Iran nationwide. Wages, the cost of living and state repression all factor in among the legitimate grievances of the people. Today even the peoples of Kurdistan and Baluchistan joined the mass movement of the Iranian people. With the first blooms of protest taking place in Mashhad against rising prices and conditions of poverty, all worsening conditions for the people. 16 protestors have been shot and killed by the police and hundreds are arrested according to state media reports. Limitations and restrictions have been placed on social media in an attempt to quell the rebellions. In spite of these restrictions the south-western city of Izeh has fallen to the rebel masses. The class character of the rebellion so far has seen involvement from the working class, the unemployed poor as well as sections of the middle class.

As the rebellions broke out the US imperialists foam at the mouth, lead imperialist Donald Trump has the nerve to state “the whole world is watching” as if the whole world was not watching when trumps police murder protestors or civilians, when the US drone bombs nations oppressed by US imperialism under both Trump and Obama. The US war machine has had its sights set on the reactionary government of Iran since the fall of the Shah who was a US puppet. The US imperialists will look for any opportunity to exploit the pain of the Iranian people to its own monstrous ends. This however should not be enough for anyone to denounce the mass uprisings, which while incapable of actually taking class power are a legitimate expression of mass outrage. Progressive slogans among the people include “conservatives and reformists, the game is over”, “the ‘leader’ is acting like God, the nation is begging”, “gun, tank, Basiji (paramilitary members who support the state) can’t scare us” and “bread, labor, freedom”.

Reactionary aspects in the movement

Monarchist, sexist, racist and pro-shah slogans have also been heard from a minority of demonstrators. “Rest in peace Reza Shah”, racist anti-Palestinian slogans and others. While there are reactionaries who have surfaced among the people they have not consolidated or managed to assume influence over the mass movement. Reactionaries will tend to capitalize on legitimate demands when they have something to gain and when contradictions between the people and the state become the most sharp. Mao stressed that the masses themselves are divided into three major groups, the advanced, the intermediate and the backward. It is inevitable that with large scale mass movement’s backwardness among the people will express itself politically. This does not however negate the majority of the people who will fall somewhere between advanced and backward ideas. There is no serious organized monarchist group, and in some cases the slogans invoking the Shah are just angry ways in which the masses lash out at their corrupt government.

Why do the masses rebel in Iran? There are the grievances already mentioned as the principle causes of the mass uprising. However there are many secondary causes that have stirred the emotions of the Iranian people. Last month several large and small earthquakes as well as a famine in the country side and increase of air pollution in the cities have exposed the limitations and callousness of the Iranian ruling class, demonstrating their inability to provide for the needs of the masses.

What are the limitations of the mass protest?

As Lenin explained in his work “What is to be done?” mass protests without the leadership of the Communist Party can only fall short of their demands he stressed that without power all is illusion. While the masses themselves demonstrate time and time again their powerful potential, ultimately without a People’s Army which can protect the Dictatorship of the Proletariat which is led by the Party, the people cannot remain ahold of their gains. Some reactionary or another will come in to claim reclaim power for the ruling class bourgeoisie. We have seen this take place in recent history in Egypt and with the Arab Spring. In the US we have witnessed the largest mass movements succumb to the control of the ruling class by means of NGO’s and other state collaborators or opportunists. In the final instance it is the bourgeoisie who control the state apparatus, and without real New Democratic revolution with the working class being the leading class, it is inevitable that power will remain in the hands of one section of the bourgeoisie who will continue to oppress and exploit the working class.

What the masses need is a Party, a People’s Army and a United Front of all classes who stand to oppose imperialism and reaction. In Iran revolutionary communists have been systematically oppressed by the state. With thousands of comrades having been tortured and killed in jails throughout the 1980s

Organizations like the Iranian People’s Fedai Guerrillas, Union of Communists of Iran (Sarbedaran), etc. after fighting for years against the Shah engaged in armed struggles against the Islamic Republic. Revisionists like the Tudeh Party and others helped the reactionary Isalmists to repress the revolutionary communist movement. A huge number of revolutionary communists were murdered during a span of 3-4 weeks in what is referred to as the bloody summer in 1988 and others were forced into exile in other countries. The experience of the revolutionary communists in Iran shows us exactly how revisionism and reaction walk hand in hand to serve the bourgeoisie.

All over the world we must defend the line of Communist Parties which must be built to lead People’s War and this is the only solution to end the crimes against the Iranian people and accomplish their liberation as part of world revolution. In the absence of Peoples War we must still support the masses in their right to rebel against reactionaries.

It is right to rebel!

People’s War is the path to liberation from feudalism, bureaucratic capitalism and imperialism!