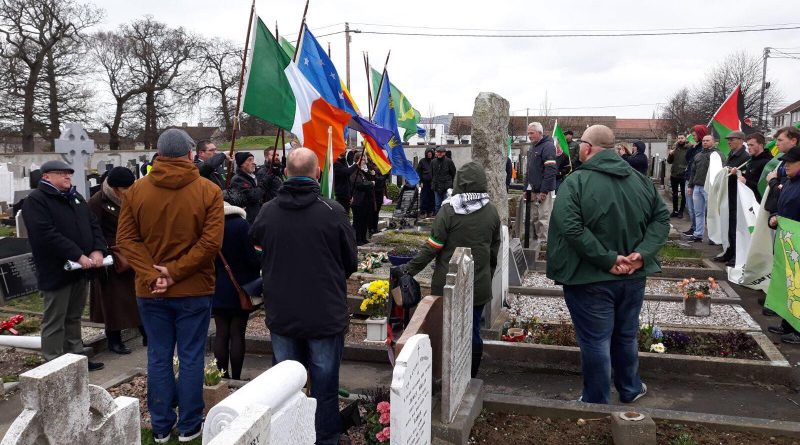 Irish Socialist Republicans from across Ireland and Scotland, joined by a number of international Guests gathered at Bray Town Hall yesterday to honour Ireland’s Patriot Dead.

The event, organised by the Seamus. Costello Memorial Committee, was led by a lone piper and a National Colour Party representing the four provinces of Ireland, made its way through the County Wicklow Town to the Grave of Seamus Costello in Little Bray.

Events at the Grave of Seamus Costello were presided over by his comrade, life long Wicklow Socialist Republican Seán Doyle. Sean’s first act as chair was to extend the condolences of those gathered to the Farrell Family on the recent Death of Peter Farrell. Sean then called a minutes silence for the Palestinian Martyrs who has been massacred the day before at the Land march in Gaza.

Sean then called on republicans and progressives across the country to build a Broad Front to resist Evictions and Vulture institutions, before calling on Caroline to read the 1916 Proclamation.

Sean then called for the laying of the wreaths, followed by lowering of the flags and a minutes silence in honour of all those who gave there lives in the cause of Irish National Liberation and Socialism.

Next Sean called on Christophe Kistler of Redspark and Foreign Language Press to read a solidarity statement from the International League of Peoples Struggle written by Jose Maira Sison founding Chairperson of the Communist Party of the Philippines.

This was followed by Pól Torboid of Lasair Dhearg delivering a solidarity statement from Samidoun, the Palestinian Prisoners Network.

Sean then announced the main speaker of the day, veteran Republican Margaret McKearney who gave an inspiring talk on Seamus Costello before finishing with a rallying call for republicans to defend communities, resist Evictions and fight against the forces of capitalism and imperialism.

The event was then brought to a close by the playing of the National Anthem on the pipes.

Yesterday’s Commemoration was kept under constant surveillance by at least two car loads of the Free States Special Branch, who filmed and photographed those in attendance and tried to question members of the crowd as the left the event.

Irish Socialist Republicans will not be intimidated by such petty harassment and will continue to play our part in building an Anti Imperialist Broad Front that can break the Connection with capitalism and imperialism in Ireland once and for all.

A short video of the highlights of a very successful 1916 Commemoration, Organised by the Seamus Costello Memorial Committee, in Bray on March 31st. Remember the dead- fight for the living!