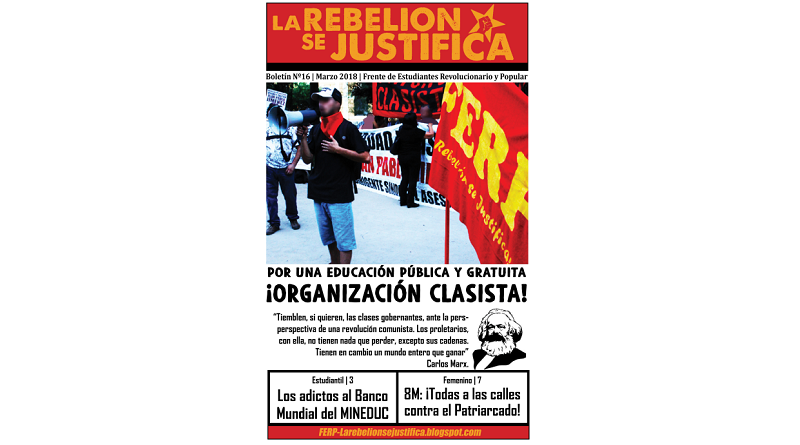 We live in stormy times: the last crisis of Yankee imperialism is sharpened every day, engaged in all sorts of wars in the Middle East, Asia, Africa, Latin America und even in Europe, deepening even more shamelessly the plunder in the whole world.

In Latin America it is specified, among other things, with the cut of rights and the privatization policies propelled today by governments such as the ones of Macri, Kuzcinsky und Temer, sthe last one responsible for unleashing a true reactionary civil war in Rio de Janeiro.

In our country, in the last March 11, the Piñera will assume the government ready to apply the mandates of Yankee imperialism, the World Bank and the International Monetary Fund, the same measures of the “Washington Consensus” applied by Pinochet, and developed by Concertação – New Majority.

Just look at its future Cabinet of Ministers to prove it: Varela in education, a stubborn advocate of paid education and privatization; Antonio Walker in agriculture, a rancid landlord who proposed to suppress the right to strike of the agricultural workers during harvest time; and José Ramón Valente in economy, a Chicago Boys fundamentalist.

The promises of investment, economic growth, and other pranks that compose their “Better Times” are nothing more than the development of the absolute national subjugation plan to the looting of Yankee imperialism and the big bourgeoisie.

In this context of reactionarization, the other forces of the old State, the New Majority and the Broad Front in the “opposition”, will try to show themselves as the only alternative, also calling to go to the streets, but we must not confuse: their sole objective is to return to their posts in the old state, to enrich their pockets once there, with super salaries between 6 and 20 million, and those of the class they represent: the big bourgeoisie and the landlords, dressed in the color they wear.

This was maked by fire to the Mapuche people, victims of a severe repression, being the government of Bachelet the one that imprisoned more Mapuche people, and that made the most absurd police assemblage in decades, the failed “Operation Hurricane”.

That is why it is necessary to unmask these bourgeois opportunists, not letting any space for them to ride on the struggles of the people, and to raise with more force the true path of liberation, the New Democracy Revolution.

Facing this more openly reactionary government we must further develop popular protest for the rights of the people and against the high cost of living.

In the student movement, it is increasingly necessary to raise a front for free public education which struggles against the privatization policies of the World Bank and to achieve true gratuity.

Therefore, it is necessary to develop in our work the classist line in the student movement, being shaping all types of mass organizations in this line the central concern today, that is, to struggle in order for the masses to defend the classist line in their Students Centers, Federations, Assemblies, Coordinations, Committees, Movements, etc.

Only by applying these objectives will we be able to make the classist line become a material force and thus transform the concrete reality of the millions of students in the country.

In this task, the FERP, applying its agreements, reinforced its ties with the Mapuche struggle, carrying out some Popular Support Brigades in a Mapuche Community in Struggle this summer; continues to organize the fight against the raise of prices in public transport; organizing the students with the celebration of the 8 of March under the slogan Unleash the fury of women as a powerful weapon for the revolution !; and by preparing the popular protest of the Young Combatant’s Day on March 29, upholding with struggle the youth who watered the revolution with their precious blood.

Also with this objective we develop the scientific analysis of Chilean education: Bureaucratic Capitalism in Education, a thesis that we apply based on the most advanced ideology of today’s proletariat, Maoism.

Unlike the electioneering ones, the FERP does not promise, but where the FERP goes there is transformation, because wherever we are, we hoist high the resplendent red flag raised for the first time by the great Karl Marx 170 years ago with the publication of the Communist Manifesto and which announces to the proletarians of the world: It is right to rebel!