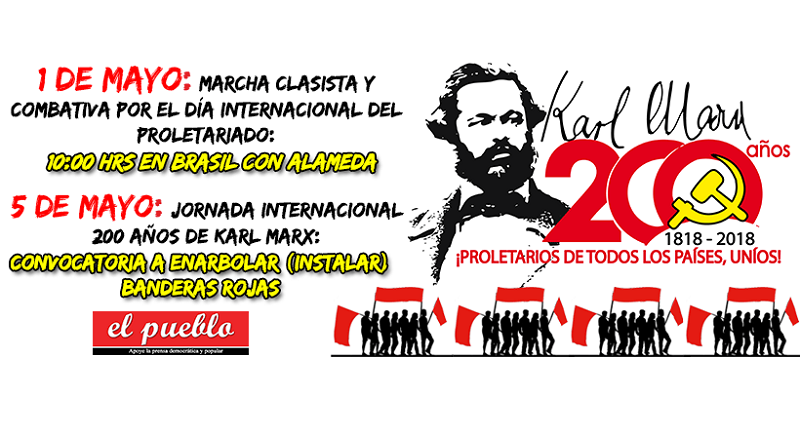 The march for a combative and class-struggle May Day has for 12 years been able to attract laborers and workers from different sectors of our town, who are anxious for justice and struggle:

Justice! Faced with the tremendous inequality in living conditions, in which a handful of big bourgeois and landowners live primarily on rent, on “clipping coupons” as Lenin said when he described them. That is, they live on businesses that are insured by law and, mainly, by police forces.
Struggle! They want to struggle for a future where the fruit of their work is not appropriated for this handful. Where, on the contrary, it would go to the benefit of all those who get up early every morning to arrive at the construction site, dig the plow into the ground, receive their students, care for the sick, and an infinity of labors more, carried out by the people. In other words, carried out by the work force that builds our country every day, including, by the way, the migrant workers. This colossal force has nothing in common with the owners of the monopolistic bosses. Parasites! who live on surplus value torn from the sweat of our class.

On the other hand, the march convened by the leadership of the CUT-CPC represents the march of treason, the march of conciliation with the bosses and their old State, the one that walks on the blood of the union leaders murdered under Pinochet and the governments that have served him, continuing and deepening his Labor Plan at the service of bosses. It is necessary to make a demarcation with opportunism, the false communists and the corrupt leaders who have dinners with the top leaders of the bosses, such as the so-called “historic meeting between the Central Unitaria de Trabajadores-CUT and the Confederation of Production and Commerce-CPC,” realized this past April 10.

This year marks the 200th anniversary of the birth of the great Karl Marx, founder of the ideology of the working class, which began the conscious struggle to end class society and move towards communism. Let us march, comrades, and advance by the combative and class-struggle way, which is the only way that can bring conquests to the working class and to all the workers!

COMBATIVE AND CLASS-STRUGGLE MAY 1ST MARCH: Alameda and Brasil 10:00.

Proletarians of all countries, unite!
Long live the 200 years of the birth of the great Karl Marx, first great leader of the proletariat!
Raise, defend and apply proletarian internationalism!
Long live the Combative and Class-Struggle May 1!