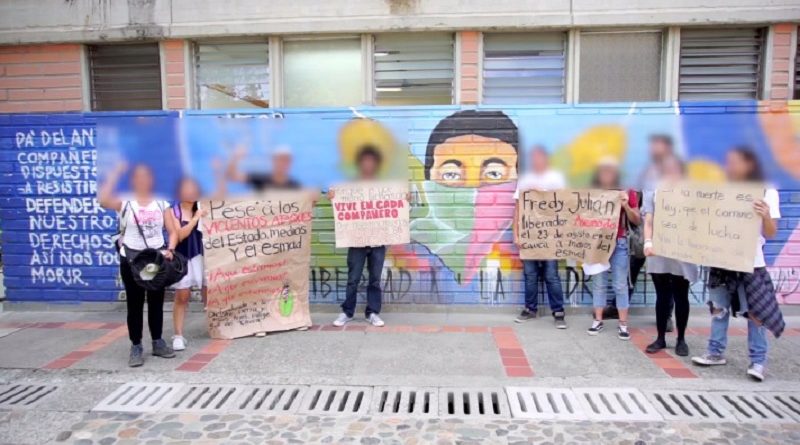 On August 23, 2018, Esmad police (Mobile Anti-Disturbance Squad) murdered indigenous comrade Fredy Julián, who received a bullet in the head amid clashes as part of the process of Liberation of Mother Earth.

In response to this, the Movement of Students at the Service of the People (MESP), organized a rally of complaint at the University of Antioquia, in which university colleagues and high schoolers committed to supporting the Liberation of Mother Earth, expressed their protest of the murder of comrade Fredy Julián, and his support for the struggle for land. The El Comunero team was present recording the activity:

In addition, as seen in the video, the companions distributed a flyer informing people about the situation and inviting them to organize to support the struggle for land in our country and in general the people’s struggle for their rights. Here are some excerpts from the flyer:

This past August 23, 2018, about 400 members of the esmad (mobile anti-riot squad) and police, attacked a community of liberators of mother earth.

The community in self-defense, resisted the aggression with stones, sticks, etc., but unfortunately during the clashes, the comrade Fredy Julián died.

He received a bullet in the head, and after remaining in a coma, had to be disconnected from the devices that kept him clinging to life.

Context: What is the Liberation of Mother Earth ? It is a process of struggle through which indigenous communities of North Cauca claim and take by force land which is concentrated in few hands. Why do they do it? Because in our country there are large landowners (latifundistas), such as Ardila Lulle, who own thousands of hectares (has), while millions of peasants, indigenous, Afros, have no land, or have very little, and are not able to survive. According to Semana Magazine, “80% of small farmers have less than one Family Agricultural Unit [between 3 and 12 hectares]”, from which it follows that the vast majority of our peasants live in poverty (Semana, Así es la Colombia rural). In this context of tremendous injustice, some communities of North Cauca became tired of waiting for solutions from the State, and decided to solve the problem with their own hands: taking by force the lands of landowners and using them for their needs, planting corn, beans, other foods, building their houses and giving land to young people to build their families there, and they have also distributed food in popular neighborhoods of Cali.

But this struggle is not easy, in recent decades, dozens of peasants, indigenous, Afros, have given their lives for the dream of conquering the land. Their spilled blood has not been in vain, and the struggle will continue until the workers of the field conquer the land for themselves, which is only possible by taking all the lands of the landlords.

Faced with this crime of the State, committed last August 23, we say:

Long live the just struggle for the Liberation of Mother Earth!

Take all the lands from the latifundio!

Movement of Students at the Service of the People
MESP