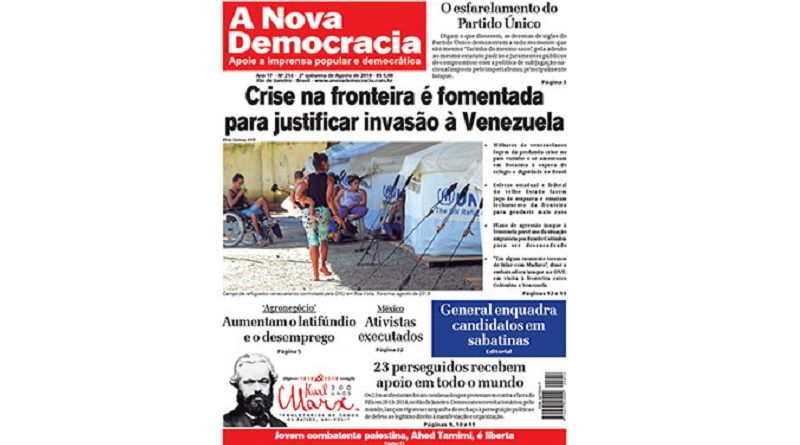 The movement of the Armed Forces (FF.AA.) toward the step-by-step execution of a preventative counterrevolutionary military coup walks in several directions, but with the same objective.

On the one hand, they contribute to the militarization of South America, supporting the machinations and threats of the USA to the integrity of Venezuela. A concrete example was the holding, in November of last year, of a war training operation in the Amazon jungle (Amazonlog) with the participation of Brazil, Peru, Colombia and USA and more “guests”.

Based on the number of participants – Brazil with more than 1,500 and USA with only 30 – it is necessary to assume that the 30 Yankees would be military instructors who would prepare the Brazilians for the logistics of receiving Venezuelan migrants in Brazilian soil.

Continuing on the topic of the militarization of the region, the transfer of the Alcântara base to the USA is gaining traction, an area so much coveted by the Yankees that, if concretized, will become a true Yankee military enclave in the state of Maranhão.

On the other hand, there is an even more deplorable fact to the standards of even the old democracy, but nothing strange in a sham republic: a general submitting to a political forum the would-be candidates for management of the old state. Most of all, the Army Commander’s attitude of “inviting” such candidates to a conversation can no more than sound like a true ideological, political, and military framework for the candidates.

Such an aberrant scenario is another manifestation of the extent and depth of the crisis of decomposition of the political system and the process, step by step, of the counterrevolutionary military coup to prevent the inevitable people’s uprising. The economic contingencies imposed by the maintenance of the system of exploitation and oppression are no longer sufficient; a servile liturgy defending the old order is already necessary. That is, subjection to the status of national subjugation, guaranteeing the privileges of the market (banks) and transnationals, especially mining companies and oil companies, sealing a commitment not to change the social security benefits of the military and, finally, pledging to carry forward the reactionary war against the people, especially the poor and black people of the favelas and in the countryside. It means to continue with the murderous “public safety” policy that causes the deaths of 63,000 people a year, more than in any ongoing war in the world today, and to pile the young survivors into medieval dungeons.

This procedure is part of the “first stage” of the coup, as an initiative of the Armed Forces and the US embassy to stabilize the old order, with the enthronement of generals at government command posts, inducing the idea of giving he cold and corrupt institutions an ethical and moral “bath” while trying to recover the economy. If it fails, it is sure to pass into the “second stage” of concentration and centralization of all power, in an attempt to save the rotten state.

But all will be in vain, since the overthrow of this old order is a historical necessity of a country in which reaction – using iron, blood and fire – has stopped until now all the attempts to advance the democratic revolution, a reaction which carries on its back the saga of its nation, a junkyard of feudal, slaveholder, colonial skeletons huddled together in this centuries-old system of exploitation and endless oppression.

A political crisis whose panacea is sought in an election, made up of a fascist-coupist slate with the others hooked in bayonets, is the naked demonstration of the irreversible decay of this semicolonial and semifeudal old order and its regime of bureaucratic capitalism.

The New Democratic Revolution will come, since it is an objective, imprescriptible and pending demand of our history, when the subjective conditions of its realization are increasingly demonstrated by the masses, who are carrying them and preparing, more and more, with their uprisings, forging the force that will lead them. And any preventive measures to this great sapient are the rattles of the most anachronistic reaction that will only stir up the Brazilian people’s momentum for change.