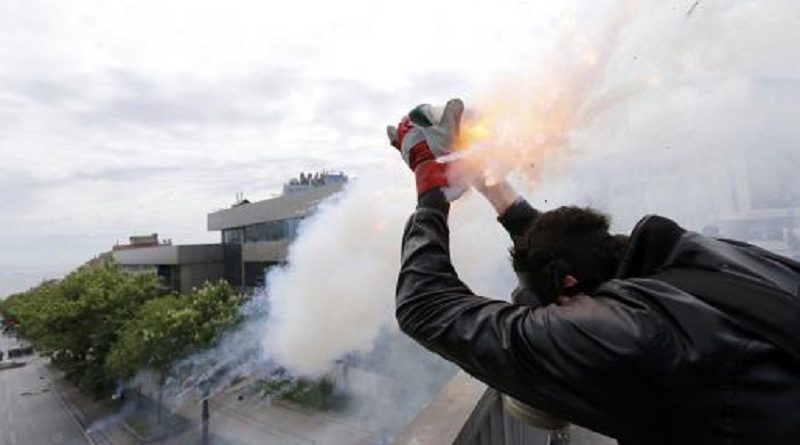 Another May Day comes, in a world where the misery and deprivation suffered by billions of people is immensely aggravated by the prolonging crisis of the imperialist system. Millions have been thrown out of jobs. Social security is cut down. Growing price rise further depresses living standards. Medical treatment and higher education become atrociously expensive. Meanwhile the perpetrators of this merciless system workout even more vicious anti-people measures, all the while obnoxiously flaunting their swelling wealth and boasting of billionaire lists.

Another May Day, where immigrant workers are forced to labour as slaves, where the trafficking of women and children continue to increase in staggering proportions, where women continue to suffer the brutality of rape and murder no matter whether its ‘backward’ Afghanistan or ‘advanced’ USA, where minorities are isolated and suppressed, where the youth are hounded and persecuted, where the demand for something as minimal as fair wages and living conditions is cut down with bullets and imprisonment.

Another May Day, in the midst of environmental devastations caused by the blind pursuit of profit, in the midst of the rapidly widening chasm of inequality within each society and between imperialist and oppressed countries. Oppression and exploitation generates resistance. And this resistance grows. This world is witness to the growing wave of class struggles and popular rebellions in country after country.

This is a world of turmoil. A wide range of forces are being propelled into struggle against the system. The grooming of the streets is no doubt insufficient for a radical break, for the building of a new society. But it opens up tremendous opportunities for connecting with a whole new generation and winning them over to the revolutionary mission of communism. It paves the way to revolution. This is principal. It must be firmly grasped.

Just a decade or so ago, the existence of the proletariat itself was questioned. Class struggle was declared redundant and considered to be replaced by movements of ‘multitudes’. Today the world is marked by repeated occasions of militant workers struggles, not just in countries like India or China, but even more so in the citadels of imperialism. There is every reason for this. For all the tall talk of the technical wonders of the 21st century, whether in the killing fields of the garment industry in Bangladesh, the slave labour camps of Qatar, the labour barracks in China, or the sweat-shops of imperialist countries, the conditions in which the vast majority of proletarians labour are as atrocious as those of the 18th century. Meanwhile, explicitly oppressive methods of control and ever increasing workloads in the modern centres of wage slavery increasingly suffocate the proletarians.

At a different dimension, the ravages of globalisation have deeply marked the oppressed countries. Privatisation and liberalisation have wiped whole sectors of employment and small business. Working conditions, already bad, have become unbearable. This was aggravated by the global crisis. In inverse proportion to the worsening of living conditions of the vast majority, corruption and profit taking by the rulers have reached astronomic peaks. While the miseries of the people multiply, the rulers obstinately pursue grandiose projects eying the fat cuts they will get. All of this underlies the repeated outbursts of rebellion seen in the world. Business cannot go on as usual. In a certain sense this is true of the imperialists and their lackeys too. Their growing contention amply indicates this.

Another May Day comes, in a world crying out for revolution, for communism; a day for the class conscious proletariat and their vanguard, the Maoists, to take stock of the world transforming mission of the proletariat and the great traditions of proletarian internationalism. Today there is no socialist country. Not even a government that can be broadly qualified as progressive, pro people. There is much, much, to be done. But there are also factors that give strength and confidence in pursuing the world emancipatory mission of the proletariat the clarity of Marxism-Leninism-Maoism and the deepening of the struggle against revisionism of all hues including those of the Prachanda-Bhattarai clique and Avakianism, the wave of struggles seen all over the world, the people’s wars in India and the Philippines and its reorganisation or preparation in some other countries, the strengthening of internationalist ties and activities among Maoist parties and organisations.

Building on these strengths, the Maoists must creatively develop forms of organisation suitable for orienting the rebellious energy of the streets towards revolution, with the building and strengthening of Maoist parties at its center. They must take up the task of building an international organisation of Maoist parties and organisations. This must be the core of an organised international anti-imperialist front of the proletarians and oppressed peoples. Thus the Maoists will be able to establish and develop Marxism-Leninism-Maoism, realise a new unity of the international communist movement, place it at the van of worldwide people’s struggles and fully unleash and realize the revolutionary potential of the present world.

Imperialism has no future!

The future belongs to communism!

Proletarians and oppressed people of all countries, unite!

Down with imperialism and all its watchdogs!