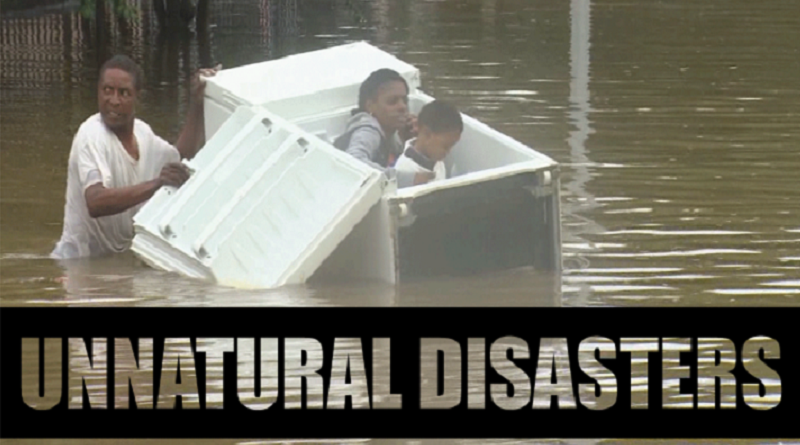 The country’s eyes are fixed on the Texas Gulf Coast. Everyone is looking but not many are seeing what the local workers are experiencing. The grim reality of a Hurricane Katrina flashback plagues the coast as they come to terms with the widespread chaos that Hurricane Harvey has unleashed on them. This is Trump’s Katrina and “natural disasters” like everything else have a class character. A natural disaster could not be considered a disaster at all if it were not for human beings production and human society. A category 4 hurricane smashing full force into the Texas Coast would not be a tragedy if there were nothing for human beings to lose. In an age of weather forecast that can predict devastating storms and evacuations are possible given the allotted resources, it is capitalism and not the weather that produces tragedy and creates the conditions for wide scale loss of life. These disasters are no more natural than capitalism itself.

It is important to be historical materialists when examining the so-called natural disasters that routinely fuck up the US south. None stand out more in human cost that of Katrina which brought its wrath down on the people of New Orleans in 2005. All people of the city were not affected equally and the real disaster struck just after the storm itself has passed. Houston is the new New Orleans and Harvey is this decade’s Katrina. Many to this day are still scratching their heads saying “Why didn’t the people of New Orleans leave?” This kind of liberal hand wringing stinks of uncritical support for the bourgeois narrative. Many did leave, in fact, over 100,000 of New Orleans’ Black working class were unable to return and forced into diaspora. There are material socio and economic facts that forced so many others to stay and face death and displacement head on. Every two to three months the city of New Orleans would have a severe storm warning and encourage evacuation for storms that time and time again would never hit; this is common along the Gulf Coast. The vast majority of the Black working class in New Orleans lack job security and have severe difficulty in landing jobs in an economically depressed part of the US south. When they would heed the warnings and take refuge outside of their city they would commonly lose jobs upon returning due to missing work. The city urged people to evacuate the area which they knew had been vulnerable to this storm due to racist and lazy city planning that did not take necessary precautions to ensure that the proper care was taken to secure levees in the poor New Orleans neighborhoods. In fact, it was well known for decades that the patchwork of the 50-or-so levees that surrounded New Orleans would not be able to ward off a hurricane of Katrina’s magnitude. It was capitalism’s death threat of “work or starve” and “leave if you can afford to” that held the gun of Katrina to the heads of the Black masses. This is not the conditions that a lot of the white people of New Orleans ever had to consider, as even their working class was given preference to the masses of the oppressed nation’s people.

New Orleans has a strong culture and tight nit communities, many of the people had not traveled outside of their neighborhoods for years on end, all their families friends and everyone they knew lived there in New Orleans. The cities white population had contacts outside of the city, places to stay and relatives to visit. Many of the Black working class who owned their own homes had them passed down from generation to generation, they could not afford insurance. The only way to protect their homes was personally and directly being present. Those homes being uninsured were allowed by capitalism to be blighted, erased and forgotten. While the upper classes had insurance and could actually draw a profit from the “disaster” many of whom had over insured their properties knowing they lived in a storm prone region. Especially renters among the Black working class were never able to return and the absentee landlords never prioritized fixing the slums they presided over.

Houston, like New Orleans, is a Black city. Houston is the westernmost point of the occupied Black Belt region. What it faces now, and what is before it, will be similar to what the Black working class masses of New Orleans suffered after the storm. Contrary to popular belief areas devastated by storms like Harvey or Katrina do not tend to shrink but to grow; with this growth comes intense stratification, segregation, and gentrification. Money from insurance held by the bourgeois and petty bourgeois constitutes a second violent flood into the area. Relief money from the state and charities finds its stewards, in facilitating the “rebuilding” of the city at the expense of the working class Black population. Any study of Black neighborhoods after storms of this magnitude supports this claim. Anyone who visited the city of New Orleans before and after the storm, who went among the masses, can grasp the second loss of culture and of community as gentrified coffee shops and other white institutions would pop up in the 9th ward.  It is no coincidence that the most white areas of the city were the least effected in property damage (French Quarter and Garden District).  Gentrification was not just salt into the wounds of a damaged people, it was the final nail for many, leaving what would be long term devastation and disaster for the community as gentrification displaces more communities far more quietly than anything nature has in store. When gentrification levels whole communities no phony charity is extended.

In these times of crisis, the most equipped responders are the state and the reactionary non-state actors (white supremacist militias) both of whom are armed to the teeth and itching to protect private property against the black working class who they most despise. In times of crisis, regular law and order is suspended and the reactionary racist whites go on hunting sprees, compounding the disastrous effects of the storm on the black community. Many of them get away with murder because the bodies have already stacked so high due to racist city planning forcing working class and especially oppressed nations working class into flood plains or near poorly constructed levees and bayous which tend to overflow.  In some cases it is the ongoing gentrification that forces these populations into precarious housing in flood prone areas. Del Valley, just outside of Austin, is one such example.

One of the most affected areas in Houston is the neighborhood of Greenspoint.  It’s not really coincidental that the city of Houston decided to place many of its Katrina refugees in Greenspoint where they were relocated permanently.  Greenspoint is a thoroughly working class neighborhood with 40% of its population making less than $25,000 a year. 60% of its population is Chicano or Mexican, 32% is Black and only 5% are white.  It should come as no surprise to anyone that when Houston goes under water those that sink are the poor. The ruling class has job security, their only job is to exploit other’s labor. Storms are profitable for them. Vacation homes out of state, even the homes they leave behind are fortified and insured, they have private security and well-stocked provisions, these are resources the working oppressed nations masses of Greenspoint lack. The masses can only rely on themselves and many in a city like Houston lack transportation or cannot afford to make trips even in the event of an evacuation or 24.1 inches of rain in some parts of the neighborhood amounting to 17 feet of water.  Those who cannot leave and have no choice immediately face the unbridled violence of capitalism not only in the form of threats from the police (former APD Chief Art Acevedo has already begun tweeting these threats of incarcerating people for shoplifting water in devastated Houston) but also in the form or predatory capitalism which tends to immediately  raise the price of bottled water, gas food and other necessities to draw exorbitant profits off of the desperation and misery of the masses.

Houston drowns, not from the flood, but from capitalisms inefficiency, the chaos of its markets, racist city planning and inept political leaders of the ruling class. Even the head reactionary Texas Governor was seen on the news strongly encouraging evacuation, while local Houstons officials told the masses over and over again to “hunker down”, “it won’t be that bad”. This stay home order not only confused the masses but has left many in impossible situations. The deaths of these people will just further stain the already blood-drenched hands of the city politicians. Capitalism is certain death for the workers and for the planet. The environmental capitalism has created with over-production and a profit driven mode of production has affected and intensified these routine storms via the process of climate change. Like the local politicians, the government’s top leaders are all in denial.

Communists exist to fight in the rift between the people and the state.

So what should communists do? We should serve the people and we should do so while exposing the lies of “natural” disasters. During the Protracted People’s War in Nepal, the reactionary government would ignore disaster stricken regions and allow the masses there to suffer and to die. The people’s forces led by Maoists knew that serving the people and people, not profit, must be our driving force. Everywhere there was a disaster and the Maoists would help the people all-the-while increasing their popularity and sharpening the contradiction between the masses and the reactionary state.

In the Philippines, the Communist Party of the Philippines, the National Democratic Front, and the New People’s Army announced a cease fire immediately after Super-typhoon Yolanda. They stopped all fighting without hesitation and began helping their people rebuild. The reactionary state had no interest in honoring this cease fire because they had no interest in the well-being of those affected by the storm. This only exposed even further to the people that communists are their friends. Showing the true nature of the reactionary state—they would rather kill communists than actually help the neglected masses.

We too must live up to the example of these comrades and go to where the masses suffer to lend a helping hand, to share in their pain, endurance, and triumph. Revolutionary mass organization Serve The People Austin is already beginning to prepare to help those affected in the storm in whatever way they can. We encourage you contact them if you want to help ([email protected]gmail.com)

To our comrades in Houston, friends family and our beloved communities across Texas our solidarity is with you, no one deserves the hell that capitalism makes of storms. We intend to keep fighting this system to construct a socialist society where people’s well-being is placed before profit and a society which could and would come together to greatly lessen the impact of such storms on the lives of the people.  Our hearts ache with the pain of the people.