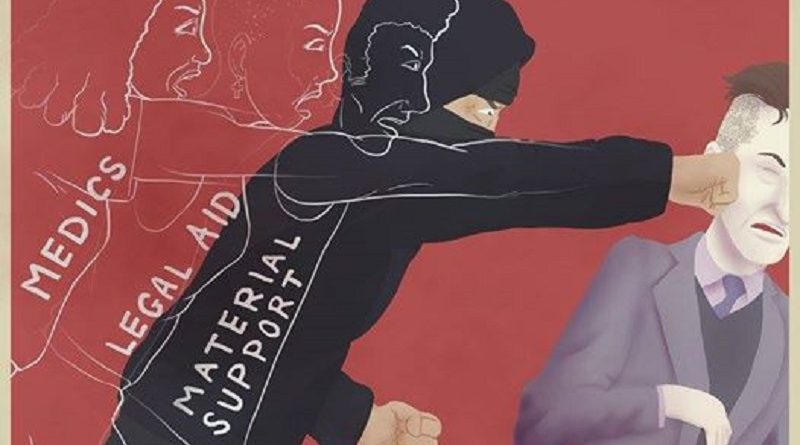 Some folks discouraged the antifascists in Austin from protesting black metal band Marduk on February 13th, 2017. This was due to an assortment of concerns. Thankfully, not everyone in Austin listened. While some classify the band as edgy, “WWII obsessed,” or just “problematic,” we think that sincere or not their infatuation with the specific role of Germany in WWII appeals to a specific type of fan—Holocaust deniers, white supremacist bikers, Trump fans, Milo Yiannopoulos wannabees, and other neo-Nazi trash. The fact that anyone would make an argument for Marduk based on the fact that there is more sincere Nazi black metal out there demonstrates just how widespread casual racism is in metal, leading even progressive punks, “anarchists,” and so on to offer apologies for this trash. It’s not “problematic”—it’s reactionary, it’s racist, and it is not fucking welcome in our city.

Another group of people who failed miserably in assessing the event and confronting it was the local chapter of Black Lives Matter, whom we have written about before critically on other subjects (i.e., their members’ anti-choice activity, their collaborating with the police, and other general reactionary bullshit). Here was one moment when they could perhaps have redeemed themselves. They set up an event page against the Marduk show, which got good circulation online, and they promised to show these white losers that they are not welcome in the hood. When it came down to it, at the last minute, BLM-Austin backed down, canceled their event page, and instead they went to a school board meeting! It turns out that tailing bureaucrats at a routine meeting was preferable to them. For us, BLM-Austin just further demonstrated their uselessness. Nonetheless, the show would go on and it would be confronted. 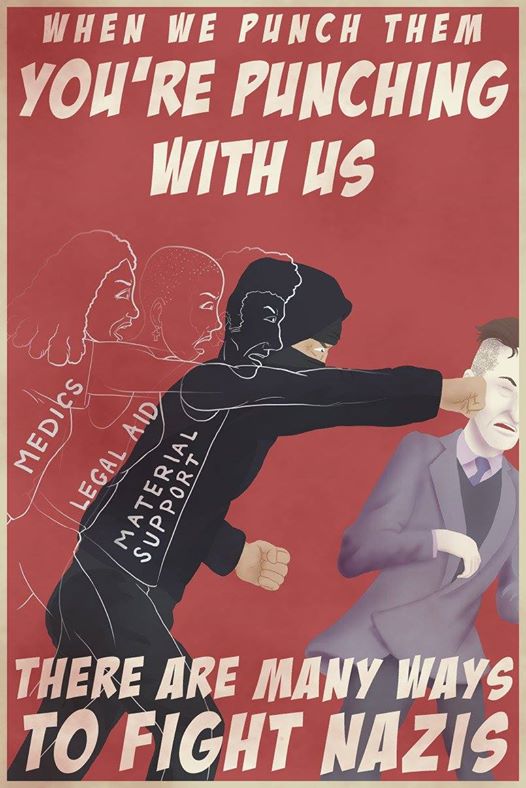 Due to the music fans in the movement who discouraged people from attending the antifascist action, the cowards in BLM, and our very late notice, our numbers were small. Our side had seen a weekend of major activity with the confrontations with police that took place in East Cesar Chavez and in Rundberg as well as around-the-clock prisoner support. Worn thin and on little sleep, we were not deterred. If Marduk loves WWII history so much, we hoped to see them greeted with a historically accurate reenactment—one where Nazis got beaten by communists!

A little fewer than twenty antifascists showed up, armed with sticks to rally outside the venue. Music fans were warned that for months neo-Nazis had been attempting to organize in this part of south East Austin where the venue was located. They were ask to not patronize the place or support the show. But due to the low standards common in the metal scene, very few were deterred. One comrade who is a highly active revolutionary organizer and a crucial part of our local movement was assaulted by a vehicle while protesting. The car hit our courageous comrade and threw them up onto the hood. This “WWII fan” in the driver seat tried then to kill our comrade by speeding away towards traffic. Our comrade rolled off the moving vehicle and was shaken but not deterred. They refused to leave the action and continued to resist and oppose fascism. While others did give chase, the fascist driver was able to escape unscathed. Antifascists will remain on the lookout for this driver and next time he will not be so lucky. We are fighters for our people and our class: you can hit us with cars, threaten us with violence, and even attack us, but we do not back down and we do not relent. Like the communists who have come before us we will fight fascists to the last person, and our comrade embodied this spirit by courageously refusing to leave the action!

Marduk clearly had become a rallying point for the very neo-Nazis who we have been vigorously organizing against. Our supporters on the ground identified several fascist and crypto-fascist individuals, one of whom was wearing a Trump T-shirt and doing a Nazi salute while being protected by bouncers. Some local community members would pass by and join in shouting aggressively at the fascists in the crowd and making it clear that Nazis, their sympathizers, and these “WWII fans” were not fucking welcome in the 41! (The 41 is a local name for the area.) We kept our eyes on the crowd, picking out the actual neo-Nazis and committed fascists, distinct from the general misguided and unscrupulous metalheads (the latter should be criticized for their unacceptable pardoning and normalization of fascist messages and for fraternizing with fascists but not targeted with specific violence like the former must be).

Not long into the acti 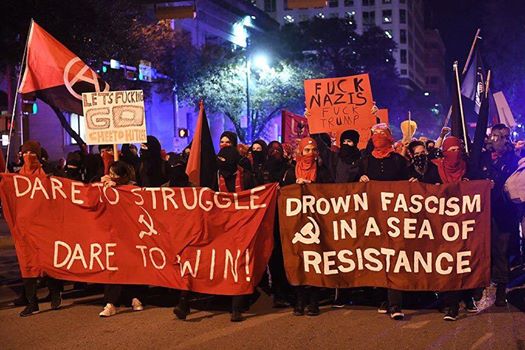 on, according to a supporter on the ground, the antifascists spotted one of their targets, Connor Halsell, a local fascist organizer and individual whom Austin antifascists have been monitoring for months. If you walk around the area of East Riverside, East Pleasant Valley, and other parts of the 41, you see hundreds of posters with Connor’s face across them reading “Warning: Neo-Nazi” and containing all of his personal information, including his home address in Austin at 1300 Crossing Place as well as his parents’ home address in San Antonio. These posters have caused a stir in the area, serving as a community big character poster much like the ones that played a major role in the Cultural Revolution in China. The posters have been very popular here, earning some mass interest in antifascism. Local youths have promised to remember his face and give him a greeting he won’t soon forget should their paths cross. Everyone old and young alike has been disgusted to find out that an active fascist organizer is hiding out in our community, which is majority Mexican but hosts many Chicano, black and Asian people as well. We all agree that such scum are not welcome in our hood.

Speaking of hoods, Connor, due in part to his bad fashion sense and recent rise in visibility, wore a large black hood as he approached the venue with three other fascists, making identification difficult. He was however identified by wearing an anticommunist patch with a hammer and sickle crossed out and other patches, including more open white power symbols. Antifascists wasted no time upholding the slogan postered around town, which reads “Assault fascists on sight.” Connor got Richard Spencered in the face with a run punch (a small greeting for a Nazi—we prefer they never get back up). Connor being the weak coward that he is made sure to bring his own bodyguard, who stupidly flashed a handgun but smartly failed to use it. Truth is our comrades on the ground were never unprepared for this to happen and he would have hit the ground before he pulled the trigger. When neo-Nazis draw guns aimed at antifascists in Austin, they will be shot down like their predecessors have been elsewhere in the past. We reaffirm the commitment made back in November that we will not tolerate another Greensboro Massacre or another Klan stabbing like in Sacramento. We especially will not tolerate a comrade being shot like the comrade who was shot in Seattle recently, and in that comrade’s name antifascists were more than ready to make the body count go up on the fascist side should we have to defend ourselves with deadly force, which is well, fine, and legal in the state of Texas. While the armed goon with poor hygiene had to wait outside with his little handgun, the actual prey scurried like a rat inside to join his coward counterparts hiding behind club security. 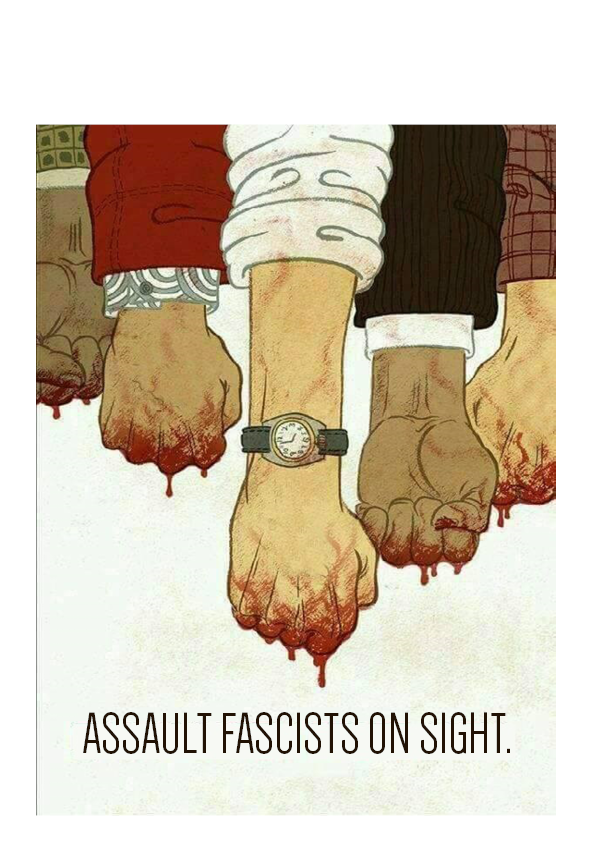 The whole venue of Grizzly Hall is a cesspool of ill repute and bad elements. It is a gentrifying force in our neighborhood, bringing in white hipsters and racist metal fans. While we have nothing against metalheads, especially our local youth who are opposed to racism, we as a community should not have to tolerate the existence of a place like Grizzly Hall, which materially supports and protects fascists, giving them not only a platform but a “safe space.” Grizzly Hall should be treated as the cancer that it is and community members should waste no time getting rid of it however they see fit. For us these times necessitate better defenses against fascism. Antifascism must become the most day-to-day activity and not reserved for reacting to fascist activity.

For us antifascism comes in the form of the simultaneous construction of the communist party and its people’s army as well as a united front. This is the only type of party that stands a chance against the organized hordes of reaction. This party will make a grave for fascism in this country. We encourage structure and organization, discipline, and a chain of command in the context of antifascist struggles. While we will work with any comrade who is committed to fighting fascism whether they are anarchists or communists, we insist that there is a need for a militarized antifascist movement that has honed its technical ability to fight as well as its ideological and political lines. As many longtime fighters and new recruits alike begin more and more to cast aside all illusions, we march steadily towards an antifa of a new type! Do not give the enemy an inch and do not let fascists feel safe anywhere.