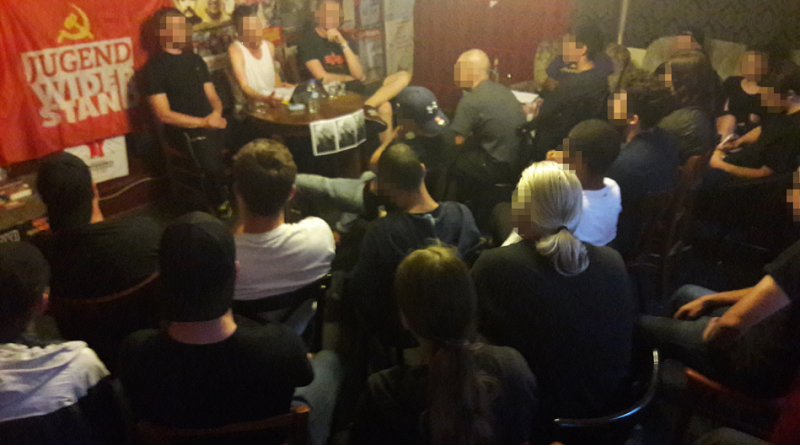 With 35 people, the back room of Café Commune in Kreuzberg was filled up for our event about the Revolutionary Student Movement (RSM) in Canada.

Following an introduction by Jugendwiderstand, which stressed that universities (especially in Germany) are a hotbed for agents of imperialism with only a minority of proletarian students who nevertheless should be considered, organised and mobilised within the class struggle by revolutionaries, the visiting former member of the Revolutionary Student Movement from Canada began his presentation.

He explained the character, position, methods of work, evolution and perspectives of the RSM, which has become the largest anti-capitalist student organisation in Canada with sections from coast to coast, having even mobilised tens of thousands in the Spring of 2015 in Canada-wide protests. This enormous revolutionary development began as an initiative of the Maoist Revolutionary Communist Party (PCR * RCP) and grew through a creative application of the mass line. Interestingly, in addition to the generally different economic conditions of studying in Canada (high tuition fees, direct presence of monopoly capital at the top decision-making level of universities), the greatest opposition faced by the comrades so far has come from the supposed “Left”, namely revisionists, Trotskyists, and social-democrats. However, there is positive cooperation and solidarity with anarchists. The RSM also works as a mass organisation for the theoretical and practical training of revolutionary cadre, who having fulfilled specific conditions may then join the revolutionary party.

Core principles of the RSM include unity with the general class struggle of the proletariat and with the struggles of the various peoples of the world, struggling for reforms openly with the aim of revolution, proletarian feminism, and the refusal to collaborate with the Canadian state – since it is an instrument of oppression of the bourgeois class and was built as a colonial state on the blood of the First Nations.

After a few questions and some discussion, the event came to a close around 9 pm. Additionally, there was an information table with materials for the election boycott and copies of the book “The Communist Necessity” by Canadian communist J. Moufawad-Paul were available for sale. We were also particularly pleased by the greeting from the Coordinating Committee of the RSM addressing the event and Jugendwiderstand.

This event was a good internationalist exchange and very interesting for proletarian and revolutionary youth in Berlin. In addition, it served – as requested in the greeting of the RSM – a greater unity between the struggles and organisations of the youth of the working class and the people at the international level.

Solidarity and comradely greetings to the MER-RSM and Canadian revolutionary youth inside and outside the universities! Long live proletarian internationalism!