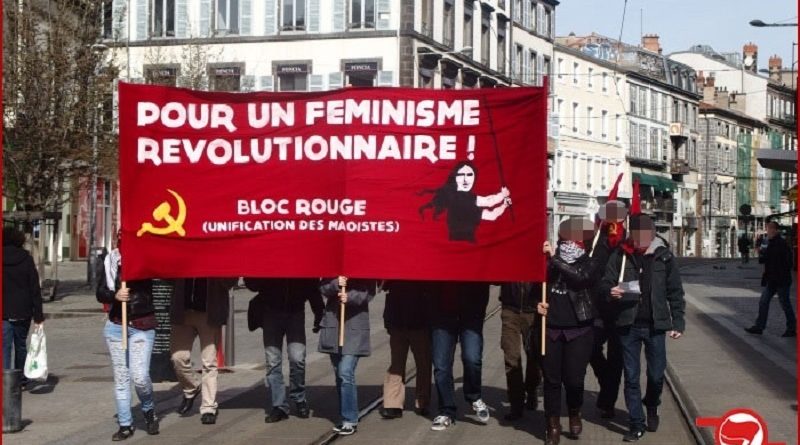 For the first time since the beginning of the unification process, the Bloc Rouge organized an event for International Women’s Day. Here is the report and some pictures of that weekend! 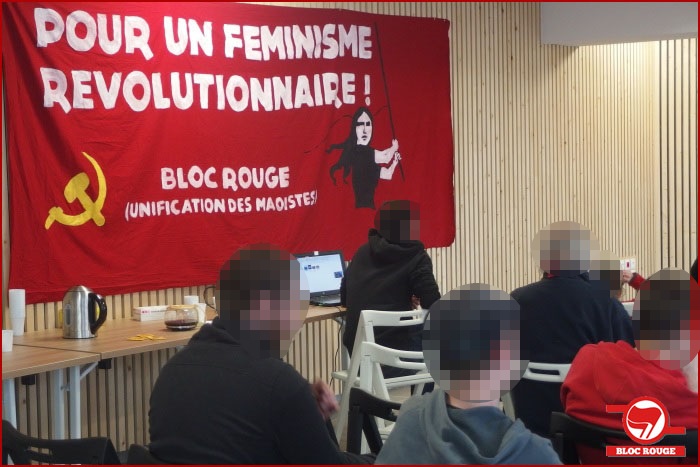 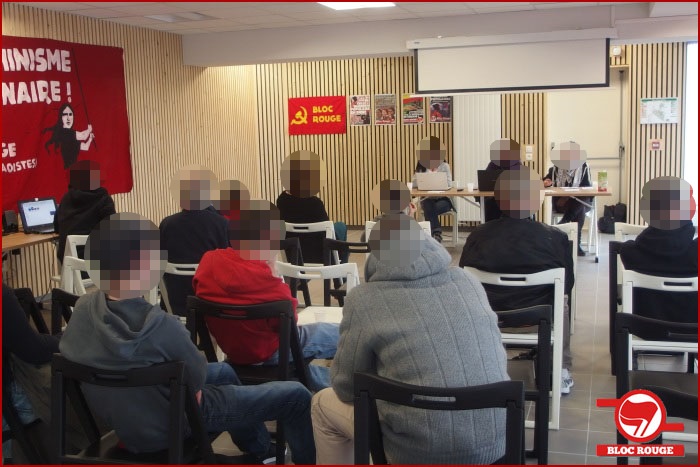 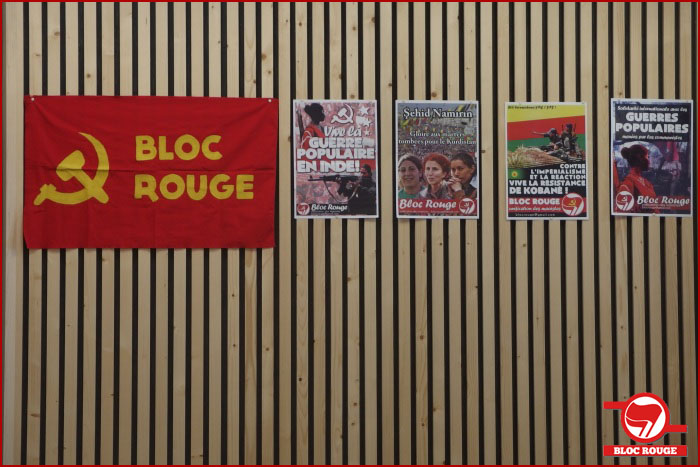 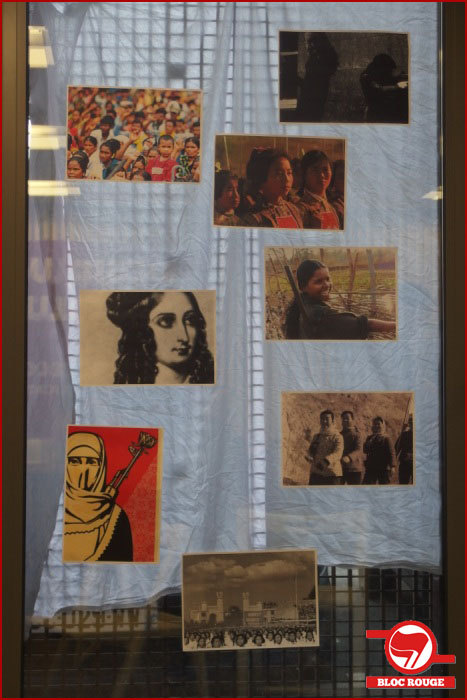 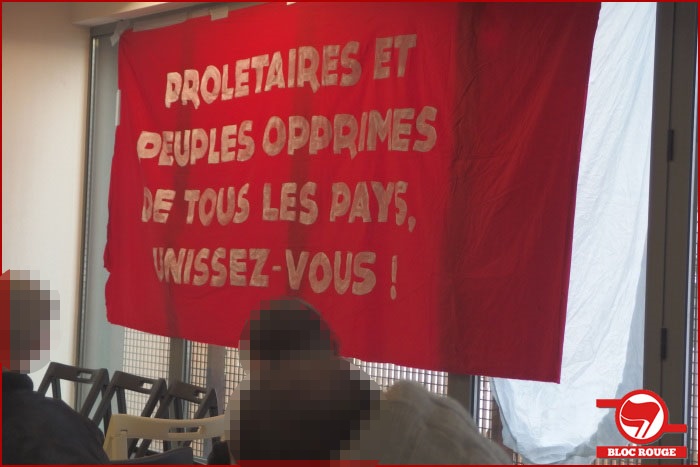 In connection with the International Women’s Day (March 8th), Bloc Rouge organized a screening-debate Saturday 7th of March in a young workers’ hostel in Clermont-Ferrand.

During this event, we put in place a child-care space with the aim to enable women, who often have to take care of children, to participate more freely. 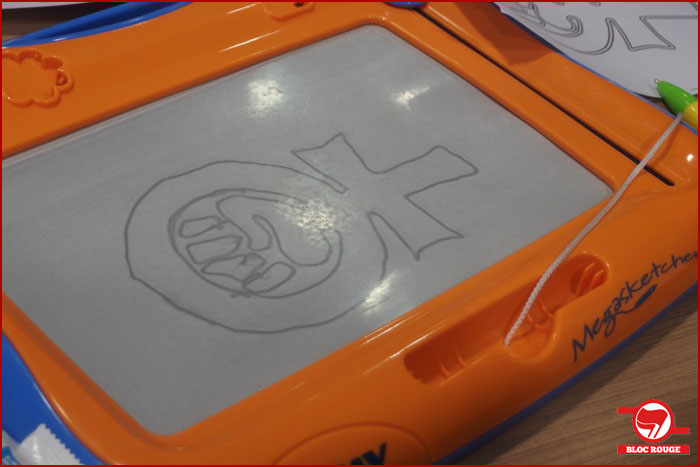 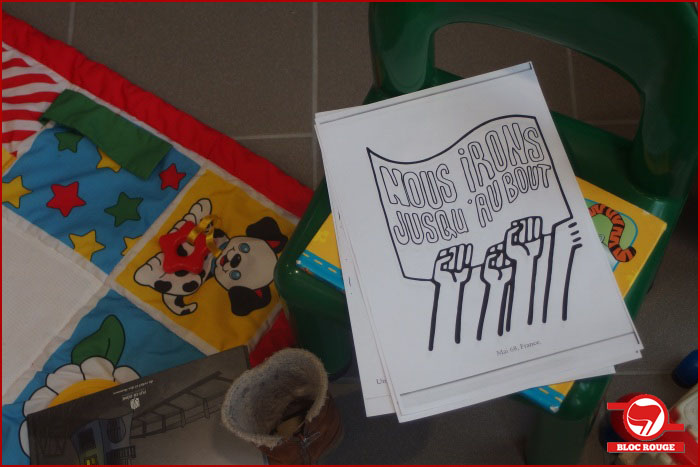 This event gathered around 15 people with whom we could discuss about feminist self-defense and organization. 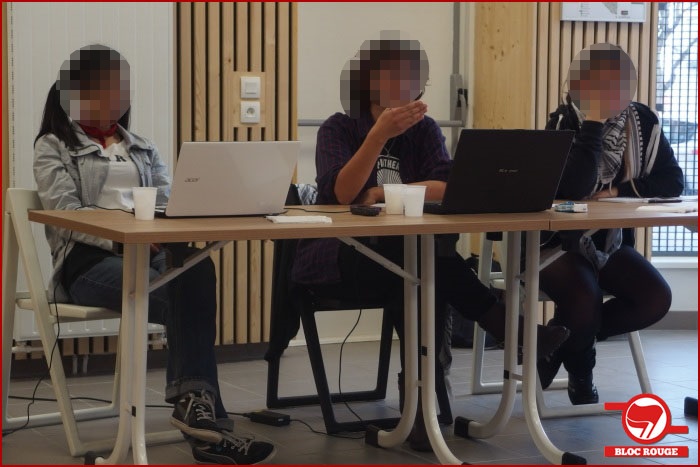 After a presentation of women’s situation in France, we talked about examples of rallying against patriarchy and all the violence it creates all around the world.

So that we have talked about Pink saris, an anti-sexist gang, and about women who are a part of people’s war in India, but also about proletarian feminist movement in Italy or in Canada. 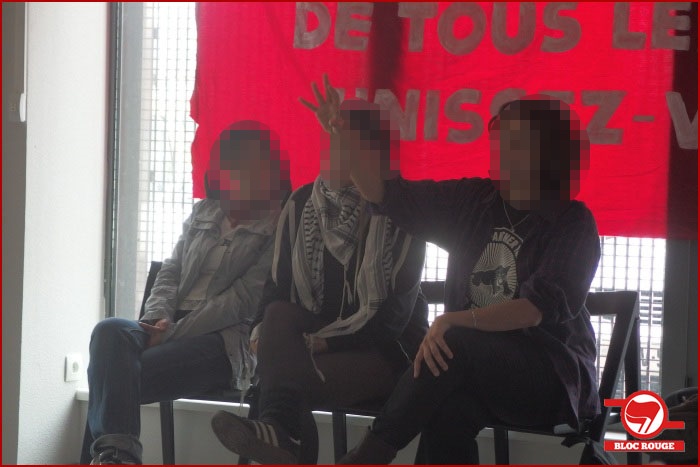 We conclude that the only solution we have is to build proletarian feminist movement here too. Then we speak about prospects that we want to set up here in France.

The first actions in this way will be the organization of a movie screening, “Gulaab gang”, about Pink Saris and, in a second time, set up an unmixed self-defense course. 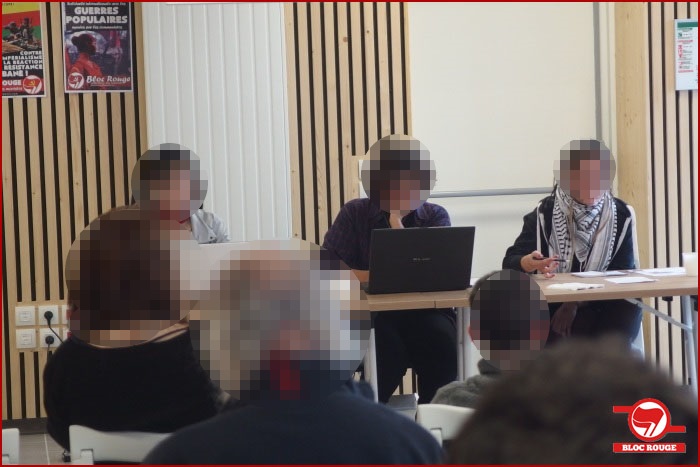 This meeting’s closed with a friendly moment with music around a buffet. 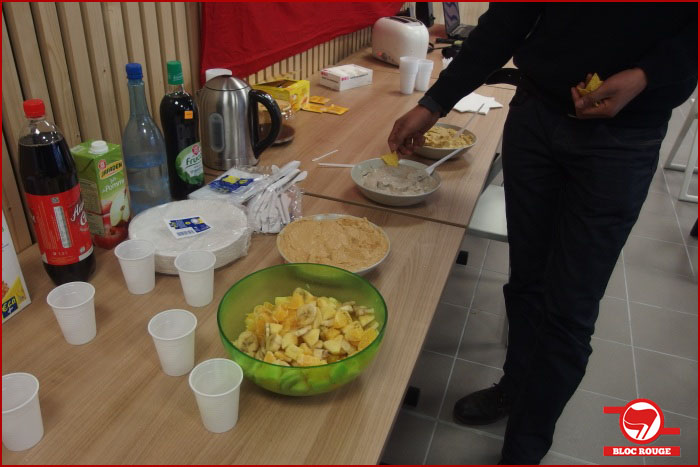 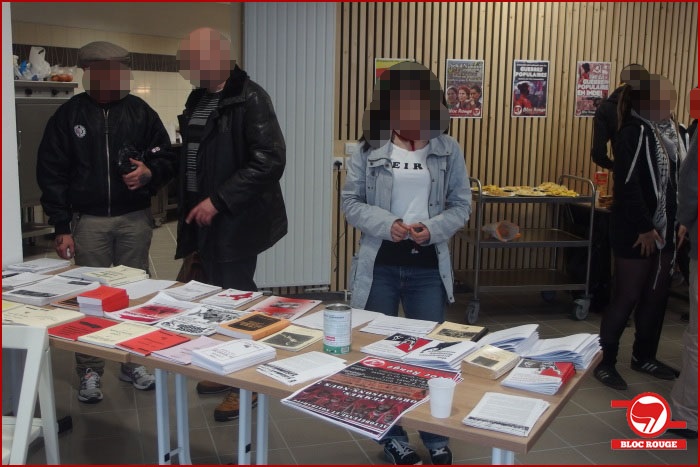 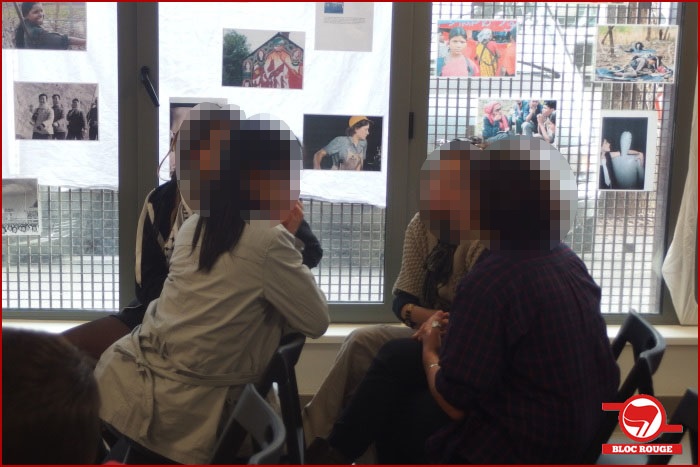 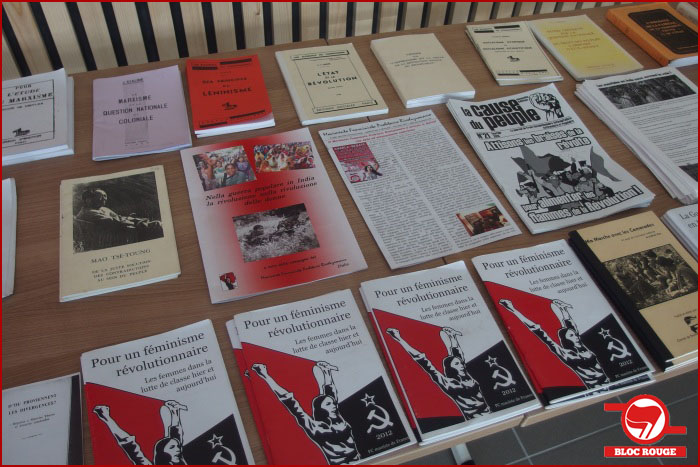 The following day, we took part in the local gathering for women’s rights. We arrived behind a big banner “For a revolutionary feminism”, chanting slogans like “Feminist and proletarian! Patriarchy, you will suffer!”, “Cops, machos, and bourgeois, you oppress us? We will kill you!” which were joined in by a part of the gathering. 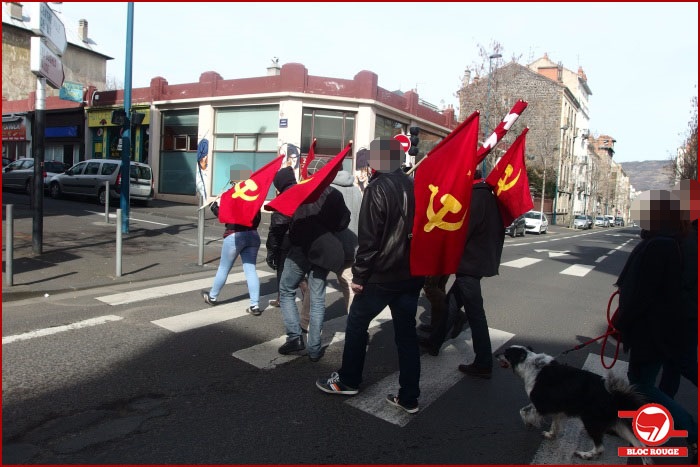 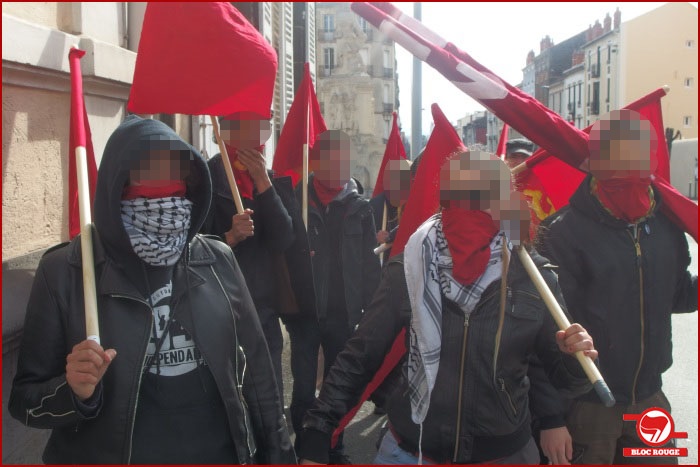 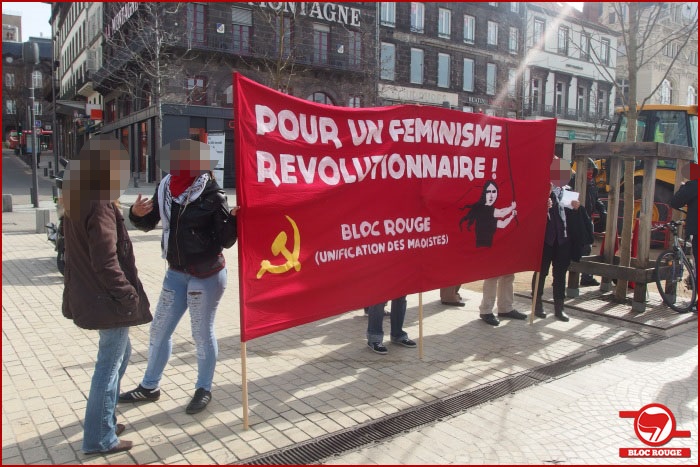 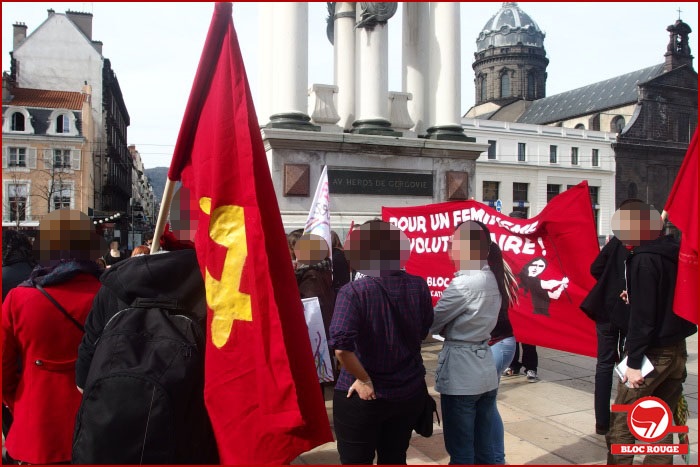 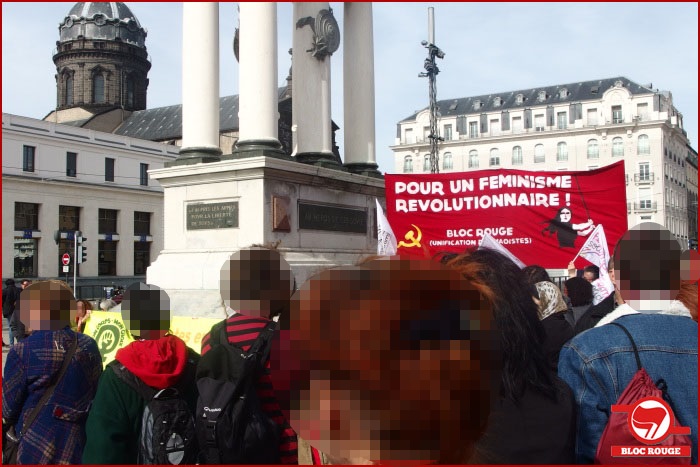 A comrade presented the Bloc Rouge’s speech for this occasion. 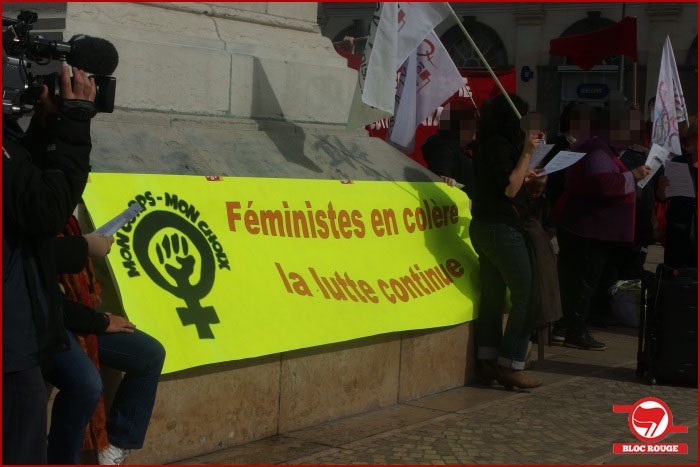 After speeches, the gathering sang the Women hymn, which was closed with one of our energetic slogan.

« Against patriarchy, I stand up and fight!
Against lesbophobia, I take my helmet and my gun!
Against capitalism, we will build socialism!»

We met women motivated to progress toward proletarian feminist solidarity and to go to our future projects. This week end has been successful and embodies, for us, the foundation stone of a proletarian feminist front in France.

We’ll continue to make events in that goal and invite each one to contact us and join this project of popular and feminist solidarity.

Against every oppression,
Self-defense and solidarity !
Women, organize the Revolution !