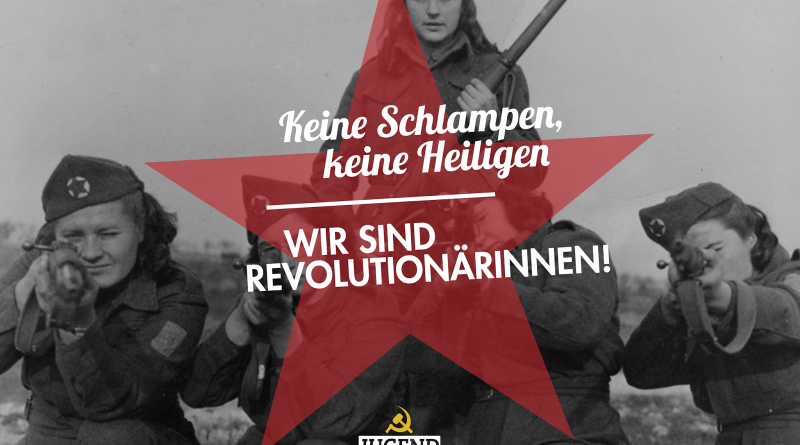 Not Sluts, Not Saints – We are Revolutionaries!

In honour of the tradition of Clara Zetkin and Rosa Luxumburg, on the occasion of the Women’s Day of Struggle on the 8th of March 2015 we direct our call for action on all women: Be brave! Defend yourselves and fight!

What is the 8th of March?

The 8th of March is the International Women’s Day of Stuggle and is a 100 year tradition. Back then, at the beginning of the 20th Century, several hundred socialist women gathered together with socialists all over the world in order to fight for their equality. They showed bravery and strength, and with the female masses behind their backs in the following years they fought for, among other things, universal suffrage for women in many countries. Since then the International Women’s Day of Struggle has been well-established as an important day in the women’s movement and is celebrated each year with political rallies and demonstrations, international women’s assemblies, and festivals. 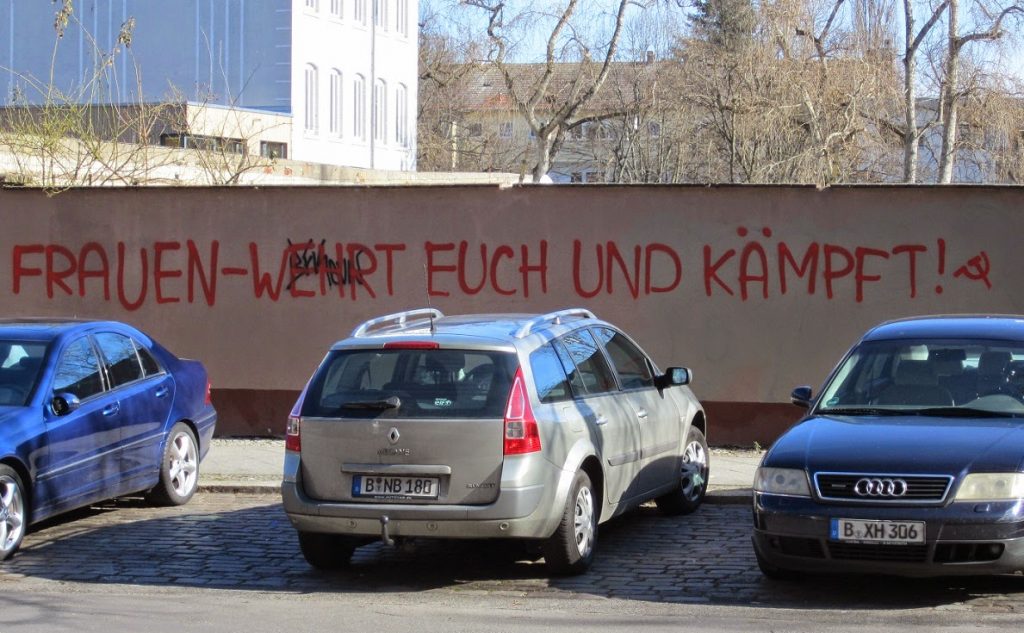 It is not new that women are quite far away from actually equal treatment with men. Whether it’s the difference between salaries for the same work, the miserable working conditions on the basis of family obligations, or discrimination in job searches due to possible pregnancy, there are enough examples despite formal equality and progressive “emancipation”. But we ask even further: Is equal treatment between men and women within the ruling social order actually what we want? To be equally oppressed and equally mould life according to the pursuit of profit? No. Furthermore we ask: What is the root of the oppression of women? Is it the aggressive nature of men? Is that a reason to, above all, fight men? No. We say: The oppression of the women has its roots in the oppression of people by people on the basis of the relations of private property; that means in the class structure of society and that it is part in the opposition between the bourgeoisie and the proletariat. Therefore the liberation of the woman within the ruling imperialistic social order is not possible, and is only to be reached after the socialist revolution as well as the cultural revolution necessary to reshape society. Since the civic state has an immense war machine at its disposal in order to enforce and hold onto its power, the oppressed classes have to fight and develop its own strategy and tactic under the leadership of the communist party. All of this can only be tackled when we understand that the borders do not run between sexes or nationalities, but between classes, and when we make it our goal to fight together with men, to educate ourselves and them, to lead ahead with brave example, and to learn to show strength.

A Look beyond the Box

The violence of the ruling class against the oppressed is ubiquitous around the entire world. And within this it is evident that the violence against women is even more grotesque. Alone in the last few months innumerable atrocities against women have come to light. Whether it is the series of rapes in India, the rape and dismemberment of a young woman in Turkey, the gruesome murder of the pregnant 19-year-old Maria in Berlin, or the number acts of domestic violence that are published each day – all of this should open our eyes to the true face of this world order and not leave us cold! Because these are not coincidences and the women are not “themselves to blame”, as it is often claimed between the lines. Behind all of this there is a principle – the principle of the imperialist world order; the class structure of society and the exploitation and oppression of the lower classes in order to maintain the upper.

In the imperialist countries like Germany, in which the bourgeois mindset has largely prevailed in its monopoly, people are effectively prevented from extracting the right conclusions from these events and finding the courage to rebel against them. Many are “indignant”, but don’t want to give up the comfort of life in relative wealth and peace (noteworthy that most of them come from higher social strata and have more stable incomes) and try to change something within the imperialistic system beyond “dance the relations away”. Therefore the women’s movement in Germany is underfoot and has nothing to do with 99% of the women who actually have an objective interest in fundamental change. 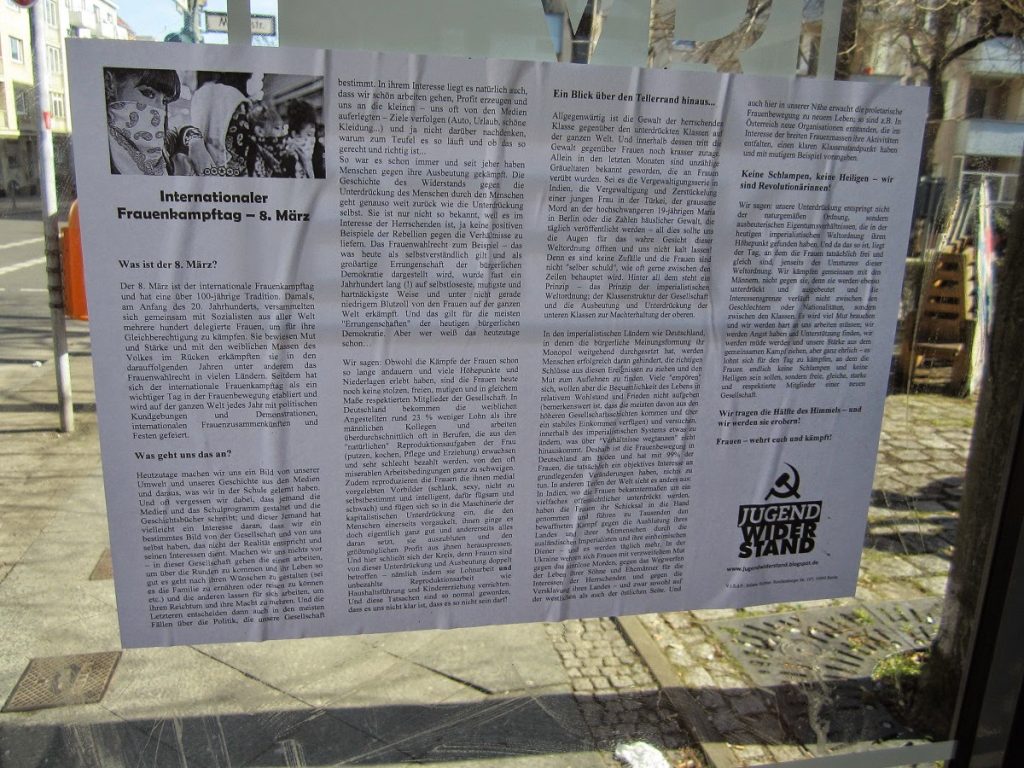 In other parts of the world things look different: In India, where women are known to be much more obviously oppressed, these women have taken their fate into their own hands and, by the thousands, lead the armed struggle in the Communist Party and their guerrilla army in the armed struggle against the bleeding of their country and their fellow people through the foreign imperialists and their native servants – and there are more each day. In the Ukraine, women defend themselves with desperate courage against the senseless murdering, agains the throwing away of the lives of their sons and their husbands for the interests of the rulers, and against the enslavement of their country – both on the side of the west and the side of the east. And here, too, in our proximity, the proletarian women’s movement awakens to new life; new organisations in Austria, for example, have emerged that develop their activities in the interest of the wide female masses, have a clear class position, and move forward with courageous example.

Hereby it is important to note that the greatest progressions towards female emancipation were made in the early phase of the building of the Soviet Union and in China (footnote 1). One example was the introduction of jointly-run childcare facilities and canteens, which took a considerable portion of the household and educational work out of the patriarchal circle of the family and gave it to the community, which gave women the opportunity to educate themselves and to actively participate in societal life. The women took their destiny into their own hands and drove forward the societal progress with great courage for the new.

Not Sluts, Not Saints – We are Revolutionaries!

We say that our oppression does not spring from the “natural order”, but rather from the exploitative property relations that have found their high point in today’s imperialistic world order. Because we understand this, it is our duty to take up the struggle. It will require much courage and we will have to work hard on ourselves; we will be afraid and find support, we will become tired and take our strength from the common struggle, but it is worth fighting for the day on which women shall no longer be sluts nor saints, but free, equal, proud, and strong!

We carry half of heaven – and we will conquer them!
Women – defend ourselves and fight!

1. See “Half of Heaven” by Claudie Broyelle