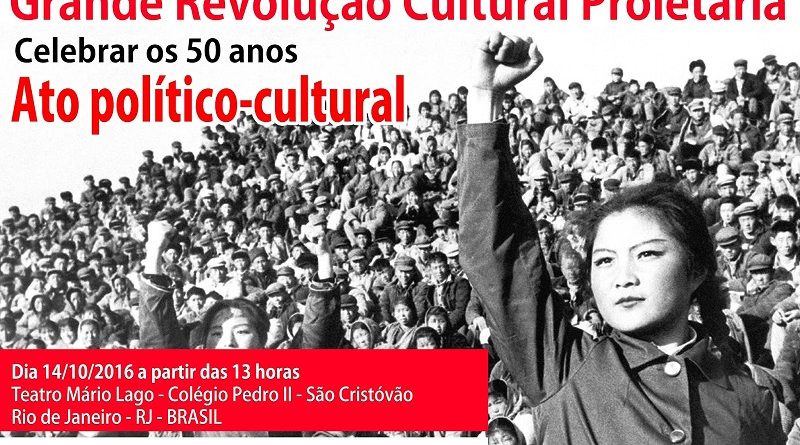 Statement of the redaction of Proletari Comunisti for the celebration of the 50th years of the GPCR in Rio, Brazil, on the 14 october 2016.

The Chinese regime of the new capitalists and imperialists banned any celebration of the Great Proletarian Cultural Revolution and wiped out of museums, history books, universities, factories, cities, every sign of 10 years of the GPCR. It has sentenced to death the Maoist leaders – calling them criminals – who under the guidance of Mao Tsetung have fought for 10 years against capitalist restoration.

The Chinese regime, imperialism, revisionism, Trotskyism and all sorts of opportunism have tried to erase from history the third great revolution of our century, after the Paris Commune and the October Revolution.

The GPCR is the culmination, the qualitative leap in the fight developed by Mao Tsetung against modern revisionism. The GPCR is unleashed by Mao to prevent capitalist restoration and to develop the theory and practice of continuing revolution under the dictatorship of the proletariat.
It is with it that the communist movement passes from the defense-retaking of Marxism-Leninism to the affirmation of the third stage of the revolutionary theory of our time, Marxism-Leninism-Maoism.

Tens of millions of workers, youth, peasants, under the indication of Mao Tsetung and of the wing of the party which had revolutionary positions waged a great battle against the followers of the capitalist road, and the representatives of the new bourgeoisie within the party and the state .

In China, the followers of the capitalist road are Liu Shao Chi and Deng Xiao Ping, who verbally support Mao and Marxism-Leninism, but in practice they use their power (President of the Republic and General Secretary of the CCP) to stop the construction of socialism and promoting capitalism, under the pretext that it is necessary to develop the production …

For the first time the workers, youth and other revolutionary elements of the masses are the protagonists of the struggle to continue the revolution at the stage of proletarian dictatorship.

Mao said: “The socialist society covers a very long historical period, during which classes, class contradictions and class struggle still exist, the struggle between the two road, socialism and capitalism, still exists, and the danger of the restoration of capitalism exists.”

With the GPCR is placed clearly the need to maintain and regain possession of the state power in all areas, giving new life to the power bodies, the Revolutionary Committees;
is placed the need that to defend the political power, it is necessary that the proletariat and the popular masses could regain in an ever more complete and creative manner the sphere of the superstructure (culture, art, education, media, scientific investigation);
in factories the division of labor, the myth of the production in the first place, the rule of the technicians on the production mechanism and organization of work is attacked, and instead it is affirmed and fight the battle so that the working class, in the production field, can put the policy and its strategic interests as a reference point – in the summer of ’68 Mao says: “We should fully appreciate the leading role of the working class in the GPCR and in all other activities. The working class must also ceaselessly raise its political consciousness in the course of the struggle “;
it is affirmed the leadership of the proletariat on the other existing sectors of society – Mao says: “The criticism of the bourgeois reactionary line is the work of the intellectuals and the broad masses of young students. But the seizure of power in the storm of January, as well as the completion of the revolution, need the “masters of the times”, the broad masses of workers, peasants, soldiers as main force”;
the concept is affirmed that the Communist Party may have a leading and avant-garde role that allows it to really fulfill its role of leadership of the socialist transition to communism, only if it carries on a continued struggle to affirm the proletarian conception of the world, against all elements of the bureaucracy and privileges which are based in the persistence of classes under socialism, that regenerate within the Party.

Mao said that “the broad masses of workers, peasants, soldiers are good, as well as the overwhelming majority of party members and the league. They always have been the main force of the proletarian revolution in all its stages. The GPCR is no exception.”

Mao pointed out: “to fight against the leaders that have taken the capitalist road is the main task of the Great Proletarian Cultural Revolution, but it is not at all its purpose. The goal is to solve the problem of world outlook and cut the roots of revisionism.”

Mao said over and over that “they must be the same masses to educate and empower themselves, because the worldview is not something that can be imposed”.

The GPCR is the origin and essence of the revolutionary wind that has swept the world, which inspired the youth, the proletarians and the people in the gigantic storm of the 70s.

This allowed Mao and the CCP to become the center of orientation and global point of reference for the whole of the revolutionary movement, in a phase in which was manifested clearly the main contradiction in the world between imperialism and the oppressed peoples, the tendency to revolution as prevalent and embodied the slogan that “the East wind is prevailing over the west wind”;
In the fire of historical events: the victorious revolutionary war in Vietnam that showed to the peoples of the world the scientific truth that imperialism is a paper tiger and can be defeated; the development of large mass movements in the imperialist countries, especially the French May, the Italian ’68/69, the struggle of African Americans and the movement against the Vietnam War in the US, which showed the existence of the revolutionary potential in the heart of imperialist countries; the invasion of Czechoslovakia by the USSR, which showed in clear terms that revisionism in power turned into social-imperialism.
And in the fire of this events, the great teachings of Mao and the PCR form a new generation of revolutionaries worldwide, from Charu Majumdar in India to İbrahim Kaypakkaya in Turkey, as well as revolutionary leaders of all the Maoist movement, and a new phase of struggle opens for the building of the communist parties of a new type, Marxist-Leninist-Maoist.

The GPCR says the slogans contained in the gigantic work of Mao Tsetung: “It is right to rebel”, “The working class must lead in everything,” “The revolution within the revolution”, etc.. etc.

The GPCR is the critics that turns into an alternative to the “crisis of socialism”, to the affirmation of revisionism in Russia. The GPCR embodies the criticism of the limitations and errors of Stalin in building socialism. The GPCR is the struggle in all fields, to concretize the assault on the sky opened by the Paris Commune.
The GPCR indicates the program for the socialist transformation in every field.
The GPCR affirms the Communist Party of the new type and the dictatorship of the proletariat based on the power of the masses.

The 50th anniversary offers then the opportunity to the international communist movement, to Marxist Leninist Maoist parties and organizations in the world to grasp the sharpest weapon that the great epoch of revolutionary struggle of the proletariat and the masses realized.

In this sense, our Party hails as a great achievement the message of May 1st this year, joining parties and organizations in the celebration of the GPCR, and in the battle for the affirmation of Maoism and join the Maoists in the world.

The new international communist movement based on mlm has its birth card in the battle of the Marxists Leninists to take up the legacy of the Maoist left, after the death of Mao, the coup and the fall of the socialist China.
This stage is successfully realized with the founding of the Rim, which is the international heir of the GPCR. It is in this international context and along the salvoes of the people’s war that in the whole communist movement, mainly thanks to the action of Presidente Gonzalo and the PCP, Maoism affirms itself as the third stage.
The formation of the Rim is the first step towards the formation of a new Communist International, the premise for the development of a general line of ICM, the birth and development of Marxist-Leninist-Maoist parties and organizations.

But along this road, within the RIM and the ICM it arises and develops a new form of revisionism that deny Maoism, the legacy of the GPCR and the revolutionary way embodied by the development of people’s wars: the Lod in Peru, the Prachandism in Nepal and the “New synthesis” by Bob Avakian led to the collapse of the Rim.

Against the emergence of revisionism have risen up within the Rim and outside the Rim parties and organizations that holding the weapon of Maoism are going to work to rebuild the international organization of the proletariat and to affirm the universal way of people’s war that be adequate to the concrete conditions of each country.
Mao says, in the course of the GPCR: “We need to promote the fight against revisionism which includes the fight against economism and dogmatism, both are revisions of Marxism-Leninism and must not indicate only one ignoring the other.”

The 50th of the GPCR comes timely to give an address and a historic strategic role to the journey undertaken and calls all parties and organizations to celebrate among the masses the anniversary with a thousand initiatives and to intensify the preparations for the construction of an unified international Conference.