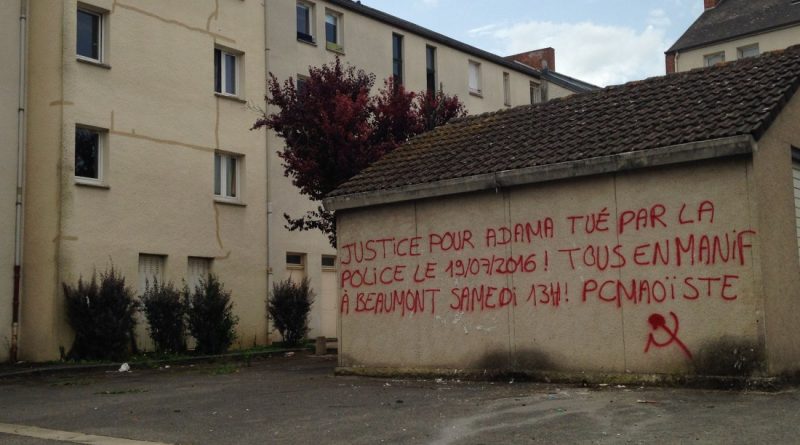 On July 19 2016, on his birthday, Adama Traoré died of asphyxiation during a stop by the gendarmes of Beaumont. Very quickly, bourgeois “justice” denied the crime of the gendarmes; the public prosecutor declared that Adama had a “cardiac malaise” following a “very serious infection” adding even that there were “traces of cannabis” in Adama’s blood, all in order to blame the victim. Up against a united family and close friends who demanded justice for their son, brother or friend over a year, the steamroller of bourgeois justice has not ceased in piling on intimidation after intimidation to silence them and stifle the case of Adama Traoré’s murder.

Complaints, arrests, police custody, imprisonment, and threats have been part of the daily reality of the Traoré family and their relatives since the death of Adama. In December, Bagui Traoré, Adama’s brother, was sentenced to 8 months imprisonment with detention and a two years’ ban from Beaumont sur Oise. He and his brother Youssouf must also pay the gendarmes a total of 7,400 euros!

In March, Yacouba, Cheikne, Dooums, and Youssouf were arrested by Beaumont gendarmes. Cheikne Traoré was arrested at 6 am by two gendarmes in plain clothes who had posted up on the bus he takes to work. They were supported by ten colleagues who shouted the bus to a stop on a roundabout. A police measure worthy of the arrest of a leader of high banditry, permitting the criminalizatino of Cheikne Traoré but also used to keep the inhabitants of the working-class districts in fear of repression.

Dooums, a friend of Adama and a young rapper who had made a tribute to his friend, was sentenced to 15 months in prison and two years ban from Beaumont. The young man was in rehab, had just obtained his license, and was preparing for training as a stretcher bearer in September 2017. Yacouba was also sentenced to a two year ban from Beaumont as well as 18 months in prison.

Today two members of the Traoré family, Bagui and Yacouba, are still in prison along with one of Adama’s friends, Dooums, while the gendarmes who killed their brother and their friend still walk free, are still on duty, and have not been charged!

More recently, Cheikne Traoré was put into custody at 5:40 in the morning for “contempt”. The mayor of Beaumont, Nathalie Groux, accused him of contempt from July 22, 2016 — 11 months late! It should be noted that from the beginning Nathalie Groux, the Union of Democrats and Independents mayor of Beaumont, showed her support to the gendarmerie and only spoke up for repression.

Soon after, a second complaint was filed against Yacouba who was taken out of the cell where he is serving his sentence to inform him that he was accused of malicious acts against the gendarmerie of Beaumont-sur-Oise on the evening of his brother’s death — because he put his foot in the door to prevent it from closing to get information!

Despite these intimidations and threats, the Traoré family and their relatives did not bend and thanks to a very strong mobilization and the important work of Assama Traoré, Adama’s sister, the family obtained a medical second evaluation. This second opinion confirmed at the beginning of July 2017 that Adama had died of asphyxiation and not of infection. This counter-evaluation clearly shows that the public prosecutor lied to protect the gendarmes. If Assa Traoré and the other members of Adama’s family had not struggled and faced down the pressures of the justice system, this counter-expertise would never have been found and published and the matter would have been snuffed out. How many families of victims are in this situation? How many have not had the time and the strength, in the middle of mourning, to engage in the roller-coaster of bourgeois justice and have had to accept that the assassins of their child or brothers and sisters were cleared?

The solidarity and the important mobilization of the family, the friends of Adama and the inhabitants of the Boyenval district, which this year established itself through discussions and football games in Boyenval, but also encounters in other neighborhoods, showed that the working-class neighborhoods could unite in the struggle and thus helped the Traoré family to not bend in the face of bourgeois justice.

Since the murder of Adama by the gendarmes, in less than a year the working class neighborhoods have had many new victims of police crimes in the specific context of a state of emergency. Among them were Jean-Pierre Ferrara, Theo, Liu Shaoyo, Angelo, Curtis, Jérôme Laronze, raped or murdered by police officers who quietly continue to perform their duties protected by the justice system that conceals such crimes.

And lately, not a surprise for the summer, police violence has exploded as Macron and his government plan a new anti-terror bill which allows none other than a state of emergency, and worse, that can be used by the French State without justification. The list of victims killed or gravely wounded grows — with Elvis, Whaid, Akram, Yassine, Foued and now recently Marina in Mantes-la-Jolie, who have been talked about only minimally on social media.

As Assa Traoré says, to change this situation –where the French imperialist bourgeois state and its police daily attack the proletariat–we must concentrate on the working-class neighborhoods.

The police are the instrument of ruling class—that is, bourgeois—domination. Their role is to maintain the social order and thus to maintain the exploitation and oppression of the capitalist system. The police cannot be reformed to be at our service; talking about “Republican police” makes no sense. The only way to put an end to police violence is to destroy this system, to overthrow the ruling class in order to establish the power of our class, i.e. the power of the proletariat. It is for this reason that all our struggles, including the fight against police violence, must be directed towards the objective of revolution. In order to carry out the fight against police violence now, we also have the duty to promote and develop people’s self-defense, self-defense of our neighborhoods, so that from now on we will no longer let it go, we will not just react and denounce afterwards, but we will protect ourselves now.

Popular, working-class districts are the stronghold of the proletariat. Our task as Maoists is to concentrate day-to-day political work on working-class neighborhoods; to serve the people concretely, in a creative way, on all fronts which interest the masses and which go in the direction of the revolution; to set an example by this daily work of propaganda, agitation, organization and action, proving that the Maoists are disciplined, firm, and attentive to the proletariat, proving that the masses can at all times rely on the Maoists.

“A communist should be broadminded and be staunch and active, looking upon the interests of the revolution as one’s very life and subordinating personal interests to those of the revolution; always and everywhere adhere to principle and wage a tireless struggle against all incorrect ideas and actions so as to consolidate the collective life of the Party and to strengthen the ties between the Party and the masses; be more concerned about the Party and the masses than about any individual, and more concerned about others than oneself. Only thus can one be considered a communist.”
“Combat Liberalism” (September 7, 1937), Selected Works of Mao Tsetung, Volume II.

It is only through the organization of the masses by the armed Marxist-Leninist-Maoist Party and the construction of the three instruments for revolution i.e. the Party itself, the United Front, and the People’s Army that the fight against police violence will be able to achieve its ultimate goal, enabled through the mobilization of the people and the offensive struggle linked up with the masses. The objective is the total disruption of police violence and the overthrow of the bourgeois state which this violence serves. At the same time as posing the question of police violence within the French imperialist state, communists must pose the question of internationalist support for the oppressed peoples victimized by the French army, as in Syria, Mali, Chad, Niger, Burkina Faso, Mauritania, Côte d’Ivoire, Cameroon … along with the oppressed peoples of the French colonies who were victims of French police violence.

Let’s commemorate the 1 year anniversary of the assassination of Adama Traoré and demand Justice!

Justice for all victims of police violence!

Freedom for Bagui, Yacouba, Dooums and all political prisoners!

Strength to the family of Adama and all other families of the victims!

Everyone and everyone at the protest Saturday 1pm in Beaumont-sur-Oise! 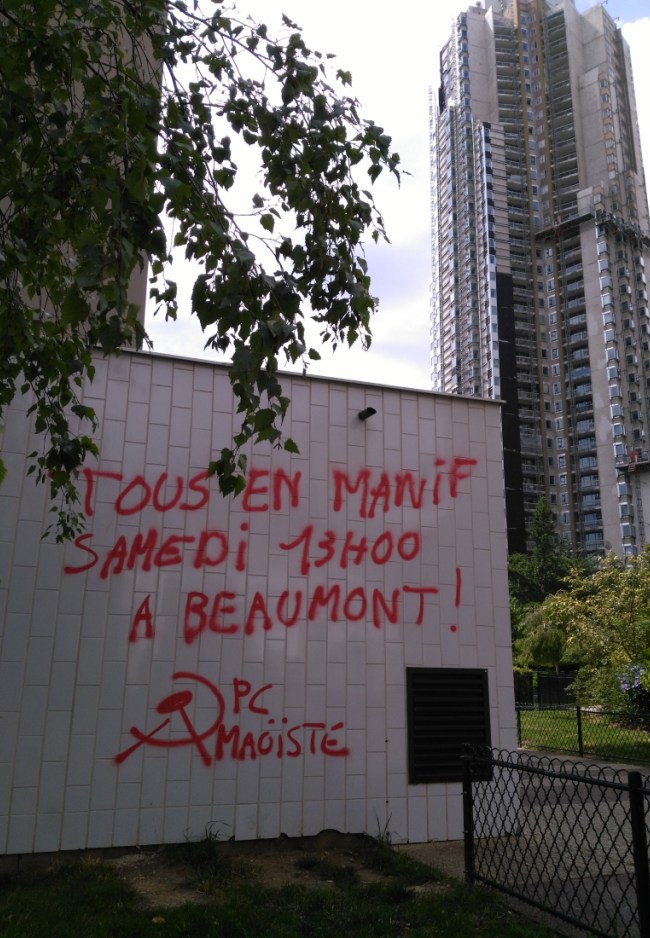 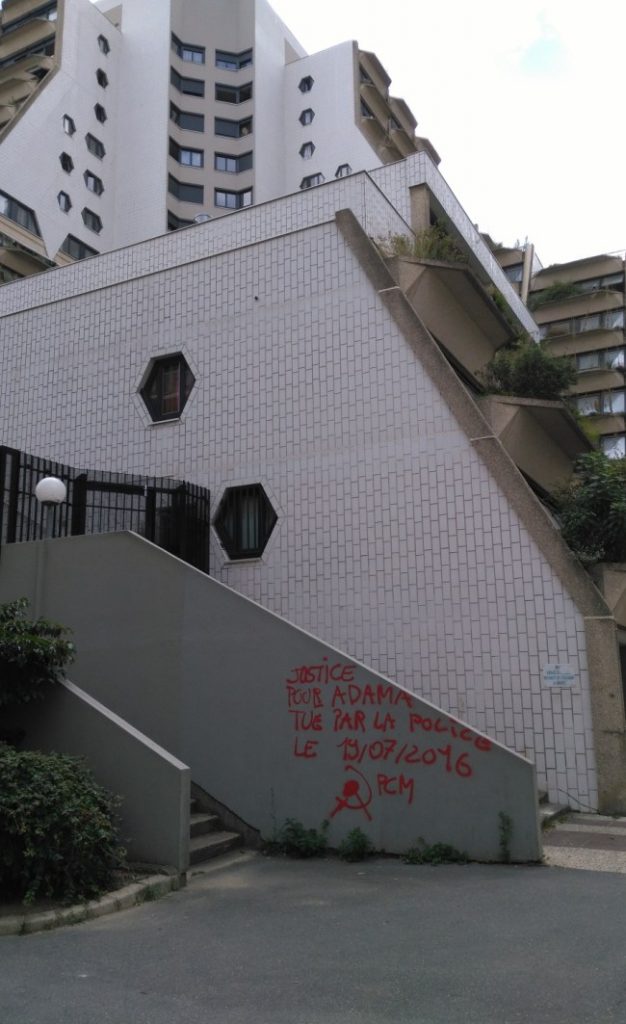 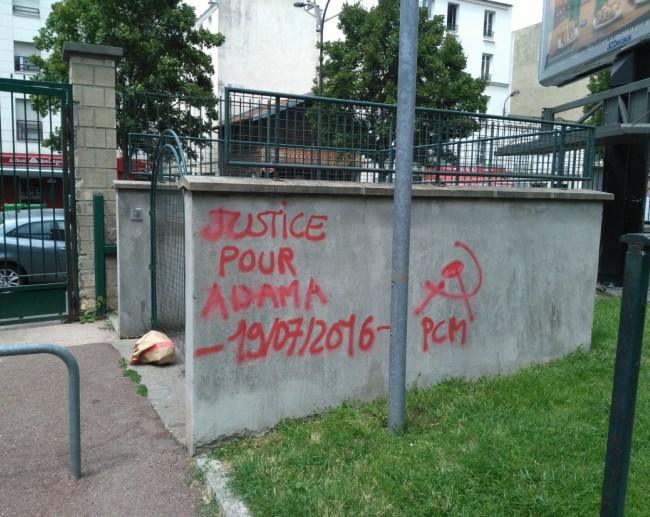 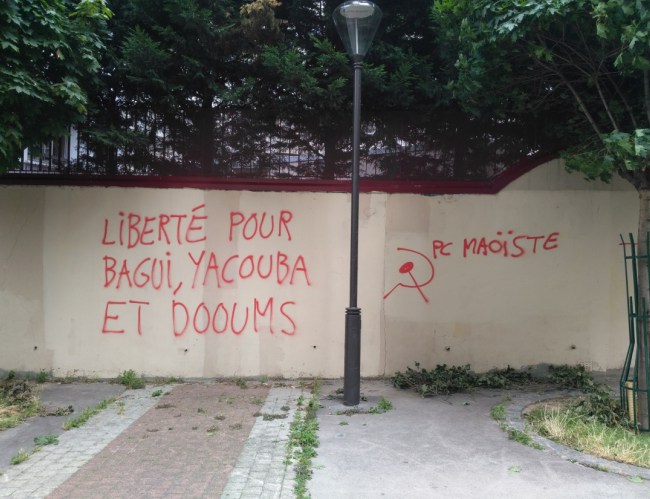