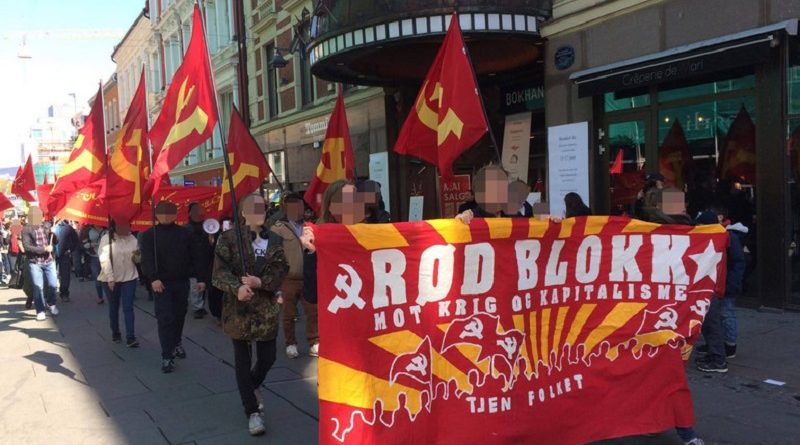 On 1 of may Tjen Folket demonstrated with Red Block against capitalism and war.

Our slogan on 1 of may this year was “Red Block against capitalism and war”, and Tjen Folket displayed with flags, slogans and banners in five norwegian cities. A few more places Tjen Folket was also active with flyers. Below you can read more about how Tjen Follet demonstrated the day in the different cities.

Below is a short report from each city. You can see more by following the links below. 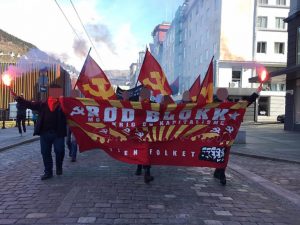 Continuing the tradition, Tjen Folket arranged Red 1 of may. We started with a breakfast where revolutionary songs were sung and a good mood was set for the day. Then the activists went to the blue rock where red block was formed and flyers were handed out to interrested and passer bys. We got some new contacts. After that the Red Block moved too Torgallmenningen, where the event of LO was held. Here flyers were handed out and there was agitation against war and capitalism, for class struggle and communism.

Here an aggressive provocateur tried to cause problems by shouting insults and exposing himself. He was shown away by Tjen Folket and nearby sympathizers.

Tjen Folket participated in the parade with Red Block, and was visible with banners, slogans and flags.

After that the activist went together to a place where a talk about war and capitalism was held followed by discussions. 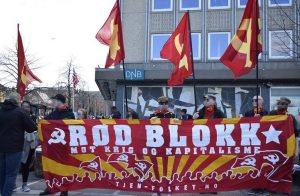 In Trondheim, Tjen Folket arranged Red 1 of may. Activists first gathered for a breakfast, before they went to the square in Trondheim. There banners and flaga were prepared for Red Block. An activist held a short speech and Tjen Folket gpt new contacts and good words from participants

After that we went as Red Block in the parade and shouted the slogans of the day through the whole parade – primarily the slogans “Norway, Nato, USA – hands of Syria!” and “Red front – against state and capital!”. After that hundreds of flyers were handed out on the street, before the activists went to the local after-event where dinner was sold. An activist heldt the days talk about “war and capitalism”, and there was a lot of discussion and good questions from new participants. The meeting was finished with the internationale.

The evening ended with a red party until late in the evening, and the red houseband played a few more or less self made songs. 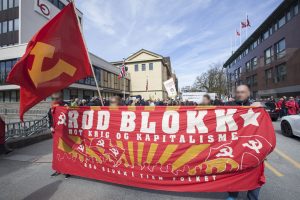 For the second year in a row Tjen Folket had a Red Block in Stavanger.

The activists gathered in the cathedral square. Her we got new contacts and talked to several people. After a while a fascist showed up that tried to take Tjen Folkets banner. The activists confronted the fascist and he went away after he got a flag pole to his belly.

After that the Red Block went into the parade. In the parade several good slogans were shouted.

After that we listened to the speeches in the city park. When we were finished we went to another park where a comrade held a speech about war and capitalism 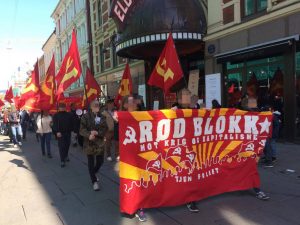 Also in Oslo Tjen Folket showed themselves with a Red Block in the 1 of may parade. The main slogan was “Red Block against capitalism and war” and the block was seen and heard with banners, flags and slogans. Flyers were handed out and new contacts established.

Before the parade activists gather for a traditional breakfast. After the parade Tjen Folket had an open meeting with dinner, a talk about capitalist wars and discussion. 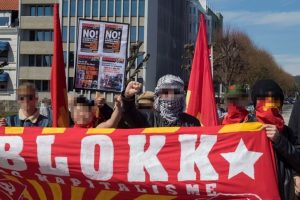 Tjen Folket marked 1 of may in Kristiansand for the 4th year in a row.

The day started with activists and sympathizers eating breakfast together, before the preparations to the march were started. Ater the breakfast we went through the program and slogans for the day. After that the activists went to Arbeideren, where flowers were put on a memorial and a speech was held, followed by starting the formation in the parade with activists and sympathizers. Throughout the march the activists shouted slogans, mainly related to the banner of the year “Against war and capitalism”.

After the march there were speeches. While the gatering continued, anti-worker people from the Progress party (who did not have an approved banner) tried to promote themselves and their pro-israel and anti-feminist attitudes. Then activists, sympatizers and others interveened and blocked them with anti-imperialist and solidaric banners. 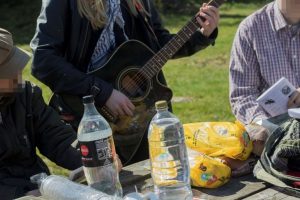 The gathering was finished with grilling, song and music throughout the afternoon. Both vegetarian and non-vegetarian food was seved and enjoyed by both activists and sympatizers.