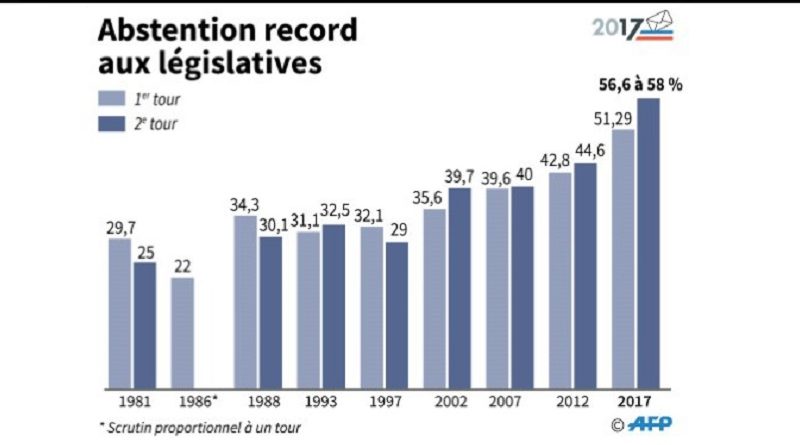 An historic rejection of bourgeois elections

It was not, however, that calls to vote were lacking. Everywhere, the bourgeois media announced the tidal wave of Macron, the so-called man of the renewal. 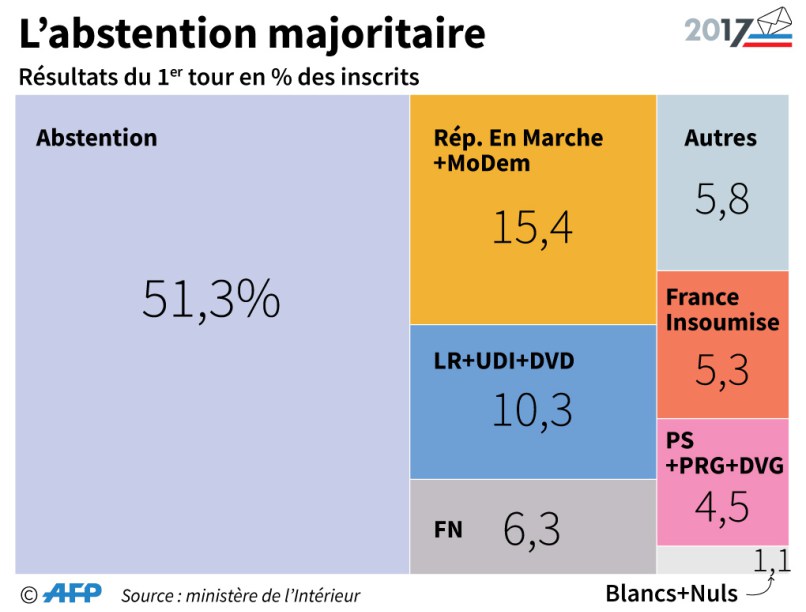 Since coming to power, we have seen what renewal is about: a parade on the Champs-Elysée in a military jeep and racist joke about Comorians risking their life at sea to flee the misery caused by the imperialists. A superb renewal!

After praise of Macron, we heard praise for the candidates he introduced. We were told that they were candidates from civil society and not politicians. But what civil society is represented by la République en Marche and its supporters? If one looks at the class composition of la République en Marche candidates, one notices immediately the enormous place occupied by executives, engineers, liberal professions… when they talk about civil society, we can’t expect a Franprix cashier, a construction worker on a scaffold all day long despite the heat wave, a cleaning worker from ONET who may not be able to vote… And unsurprisingly, in the new National Assembly, there was not a single worker, even among the elected MPs of the P”C”F and France Insoumise!

After the circus of the primaries, the two presidential rounds, the new call to “go to express yourself by a ballot in an urn”, did not really take, the media circus began to tire.

A new government ready for the war

La République en Marche comes out unsurprisingly with an overwhelming majority, as the opposition was reduced to grief with the collapse of the PS after five years of reactionary and anti-popular governance.

Macron is therefore ready to deploy an entire social demolition strategy. There is no need to go very far, it is the equivalent of the “social blitzkrieg” that Fillon had announced. It is a governance by decrees, putting the worst attacks on the labor code, the so-called Labor Reform 2.0, with blows of force during the summer when social mobilization is generally the weakest.

And at the same time, the state of emergency will become a common law, the greater banalization of human rights violations and a police force with ever more power at a time when police crimes are multiplying at such a rate that it takes the form of genuine carnage.

How to organize ourselves against the new government?

The failure of electoral strategies shows the need to build a revolutionary path – a path that is completely out of line with the current system. This is what the Maoist Communist Party proposes: to break with old practices to move forward on a clear revolutionary project with a clear revolutionary strategy – a protracted people’s war as the sole way to achieve socialism.

To move forward on this path, it is our duty to organize everywhere in all sectors a force capable of mobilizing against bourgeois offensives which will be conducted under the presidency of Macron in full continuity and with a certain intensification compared to the Presidency of Hollande.

From today forward, we have to support initiatives against the governance of decrees, but we won’t stop at that. Today we must seek to organize more, we must develop real mass work in working-class neighborhoods to recreate or strengthen popular solidarity, a solidarity of class. Only then will we be able to face this government, its politics and the crimes of its police.

After this historical abstention, let us open another way than the reformist way!

Against the decrees, let us prepare a fierce struggle!

Let us strengthen our Party, develop the front and mass organizations!

Let us prepare the People’s War!