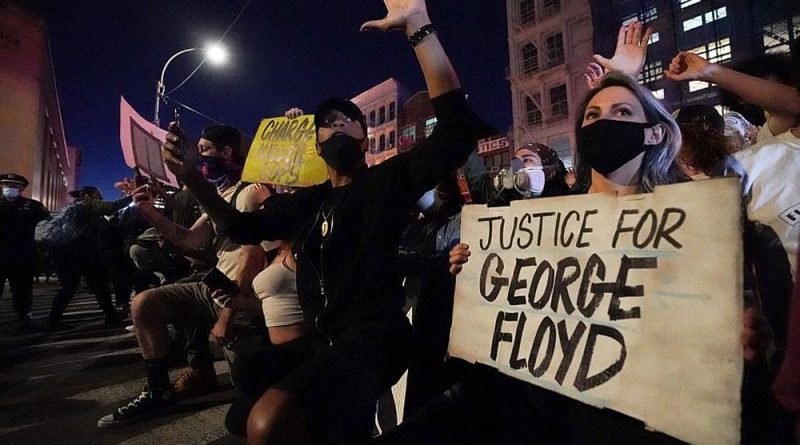 George Floyd a Black American was killed in Minneapolis Minnesota, USA. He was murdered on May 25th, 2020, by an American Police officer aided and abetted by his fellow officers. George Floyd was over-powered to the floor, next to a police car, face down, hands tied behind his back. The murderous cop applied his weight with his knee to the back of the victim’s necks. George died struggling to breath for 8 minutes and 46 seconds. The event was captured on videos by people who heard his cries; ‘I can’t breathe’. By-standers pleaded with the policeman to let George go whilst other officers stood by to lend hand to their murdering colleague in action.

The murder of a Black American by the White American Police officers has caused outrage throughout America, across all communities, Black People in particular. This outrage has poured across borders and continents and has found expressions of sheer disgusted at how the State Authorities deem Black lives worthless and so dispensable.

The murder of the George Floyd is an extreme expression of the USA’s state oppressive racial violence. Racial violence be it at the hands of the state apparatus, state inspired political forces or racist thugs is not confined to the USA. It also makes ugly appearances in the UK where Black people are four times more likely to be pick-up by the police. In the UK we have suffered the death of a young black Stephen Laurence at the hands of the white fascist scums. We saw the London police provide a protection shield around the perpetrators of the racist crime, that took years of legal action to penetrate and realise some sort of justice.

The high-handedness of state police violence is a norm in most if not all the capitalist democracies. That has certainly been a norm in the India for decades which has become more pronounced during the existing Hindutva (Hindu-Fascist) inspired ruling government. Acute racism in India manifests in near overt discrimination against the national minorities, migrants from Africa, Nepal, Bangladeshis, Rohinghyas from Myanmar. This horrible practice of racism comes in addition to the centuries old practice of Caste discrimination, where People are categorised on the basis of their ancestral occupation, a system that allows no escape from ones defined Caste – a Scavenger’s off-springs will be Scavengers and treated as such, ad infinitum.

In any society, where discrimination is based on race, caste, religion, gender, etc. what needs to be understood that these are tools used by the ruling forces to divide the majority and exert the rule of the minority. We live in a world where 1% of population has the same wealth as the remaining 99% combined. We live in a capitalist world where a tiny minority reaps the fruits of the labour of the vast majority. The capitalist trickle-down theory has failed – there is no trickle down of wealth – all is usurped by the rich. The latest capitalist model of globalisation, privatisation and liberalisation, disguised as mover of world economy, with false claims as real wealth creator, has proved to be a real disaster for the common People – though it may have temporarily provided super profits for the leaders of the multi-national corporations. All working people struggle for basic needs, food, clothing, and shelter. Everyone desires a decent wage, health, and education. All would like more time to spend with their loved ones and have rejuvenating breaks from work. The whole mix of working people, irrespective of colour, gender, caste, religion, nationality, is faced with the same struggle. All face the same obstacle. All will have to come together as One Working Class and confront its adversary, the capitalist class. The unity of the Working Class must be based on the understanding that the modus operandi of the capitalist system is divide and rule, which ensures the rich get richer.

Indian Workers Association (Great Britain) believes that the Black workers must be uncompromising in their fight against racism. Fight against racism is part and parcel of the fight of the Working Class as a whole. The Black workers must realise they cannot defeat the capitalist system without joining the struggles of the White working class. At the same time, there needs to be a realisation amongst the White workers that they cannot win any meaningful victory by allowing discrimination against the Black workers within the ranks of the Working Class. Parallels can readily be drawn in the societal set-up in India, with its peculiar divisions of Class and Caste, both instrumental in propagating exploitation of man-by-man.

The capitalist system, as with its previous avatars, has always used the weaker sections of the toiling masses, working class, black workers, women, migrant labour, etc, by paying them lower wages and unfavourable terms of employment, to keep down the labour costs and maximise their profits. IWA(GB) believes that the fight against discrimination, be it racial, caste, gender or any other form of discrimination, is an integral part of the Working Class struggle against capitalism and other exploitative systems like colonialism, feudalism or Brahmanical Castism.