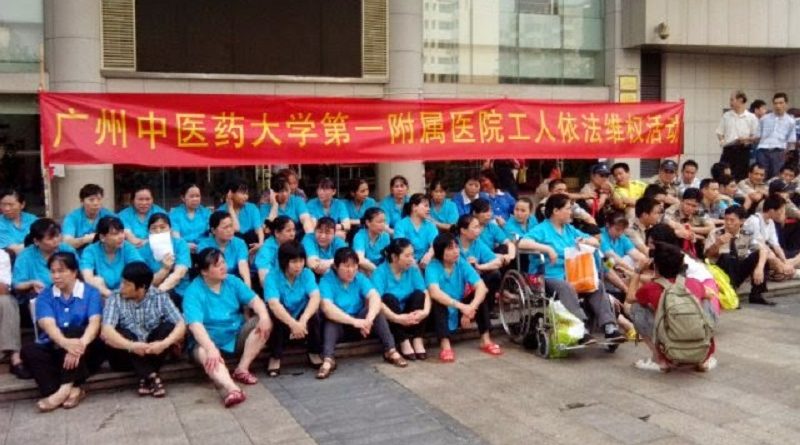 A few days ago in Berlin some young Chinese comrades visited us. At this time, we conducted a small interview with them. In their homeland, they are members of an oppositional communist group, which, according to them, is oriented toward MLM, and has been trying for some years to develop revolutionary politics with a focus on a university in China.

Their responses do not necessarily reflect our perceptions or positions. But at this point in time, we want to let the comrades speak without any commentary from us. The voices of Chinese “leftists”, apart from some liberals, hailed by other imperialist states, are rare enough to be heard in the German-speaking world.

What is your practice and perspective?

We are a Marxist communist group at the university of xxx. For several years now, we’ve been working to bring true Marxism, true Leninism, and the true history of the Cultural Revolution back to the students. However, we can’t and shouldn’t be too open with many of our positions. Repression is huge. We conduct training meetings in secret. In addition, we organize an evening school for university workers and employees.
We “serve the people” also in concrete terms, for example, helping the cleaning women at the university who are punished by withholding their wages for alleged “mistakes”, to collect their wages. We also organize evenings of music, like a kind of a concert. To that, we invite construction workers and progressive students, in order to help them to carry out Marxist education.
Our work is generally developing well. We are getting stronger and more numerous.

There are groups such as ours or similar in any big city and in almost every university.
All revolutionaries accept Chairman Mao as the highest stage of Marxism, but there are those who say Marxism-Leninism-Mao Zedong Thought and those say Marxist-Leninism-Maoism. Different circles sometimes have different views, but the contradictions often arise not in the political position, but in practice. One can recognize in practice, which is progressive and right.

How do you see the State and Chinese society today?

In China there is total exploitation and developed capitalism/imperialism. Few Chinese people know that a lot of Chinese capital is abroad. There are many struggles and strikes. The masses often struggle spontaneously and without clear leadership against the capitalists. The Communists take part in it. Many capitalists do not call the police, but call the mafia instead – simply because it’s cheaper. They disguise themselves as police and then smash the protest. You never know if the uniformed person in front of you is a policeman or a mafioso.
There is a high homelessness rate; many sleep in railway stations or empty buildings. There is also a very high suicide rate, but we don’t have any drug problems. Lack of money is a real problem.

What kind of revolution is needed?

On the question of the revolution there are two or three lines in China’s left:
The first says there must be a violent socialist revolution by the proletariat now. The second says there must be a working class led democratic revolution against the “Communist” party of China. The third is to preserve and recapture the current CCP. We consider this line to be openly reactionary.

Middle-class students like punk culture and its music, but not the proletariat. There is hardly any graffiti, and the proletarian youth listen especially to folk music. But actually all young people from working-class families support Mao.

What about the MCPC (Maoist Communist Party of China), which was briefly in the media in 2008, and called for a revolution in China?

That was an expression of the inner-party struggle in the CCP. A more “leftist” CCP squad – to the left than the ruling clique, but still revisionist – wanted to seize power.

What about international influences on the revolutionary movement in your country?

The government media, of course, does not report any serious revolutionary movements abroad. We also do not have a lot of social media like Facebook, Twitter or YouYube. That’s bad.
We heard about the Philippines revolution only here in Europe, and about the People’s War in India only through the film Chakravyuh. The struggles in Kurdistan and Ireland were also unknown to us. But now we will go back to China with many strong impressions and new inspiration!