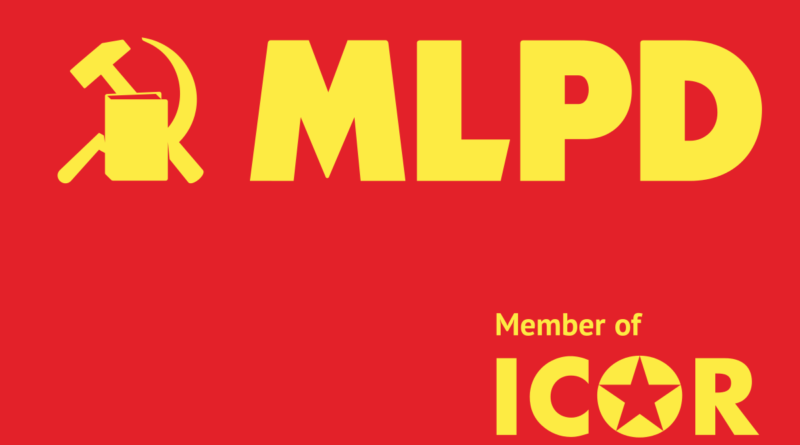 We, the Central Committee of the Communist Party of the Philippines (CPP), convey the warmest greetings of comradeship and revolutionary solidarity to the Marxist-Leninist Party of Germany (MLPD) on the occasion of its 40th founding anniversary. We salute and congratulate you for all ideological, political and organizational work and victories in the course of your struggle for real socialism in Germany.

We appreciate highly that you have adhered to the theory and practice of Karl Marx, Friedrich Engels, Vladimir Lenin, Josef Stalin, Mao Zedong and Ernst Thälmann and that under the leadership of Comrades Willi Dickhut and Stefan Engels you have been one of the communist parties of the world upholding Marxism-Leninism-Mao Zedong Thought against modern revisionism and capitalist restoration and taking significant initiatives to promote proletarian internationalism and the united front of anti-imperialist and democratic forces.

We share the serious concerns about the desperate and extremely dangerous schemes and actions of the increasingly conflicting monopoly capitalist powers to maximize the extraction of profits through an admixture of neoliberalism and protectionism, to repress the people with fascism and variants of state terrorism, to engage in war production and wars of aggression, develop chemical and biological warfare, unleash pandemics and plunder the environment to bring about catastrophe capable of wiping out humankind.

This is a time for the proletariat and the people of the world to unite and do their best to fight and defeat imperialism and all reaction. The crisis conditions are rapidly worsening but they are also rapidly driving the proletariat and the people to fight back and win national liberation, democracy and socialism. The Communist Party of the Philippines holds the view that the current anti-imperialist and democratic mass struggles are the prelude to the resurgence of the world socialist revolution.

We wish that the celebration of your 40th founding anniversary will have the utmost success in further enlightening and inspiring all your Party cadres and members as well as mass activists to further arouse, organize and mobilize the German people for the socialist cause and thus to further encourage all your fraternal Parties to advance in their respective struggle in the direction of socialism.

We thank you for your cooperation with and support for our Party and the Philippine revolutionary mass movement for more than three decades. We hope that our two Parties will continue the best of comradely relations and cooperate in undertaking campaigns and activities on a bilateral and multilateral basis in order to confront the multiple crises being churned out by the decadent and moribund world capitalist system and to further strengthen the unity of our two Parties and with other Parties.

Down with imperialism, fascism and all reaction!

Victory to the proletarian revolution for real socialism!

Long live the comradely relations of the Marxist-Leninist Party of Germany and the Communist Party of the Philippines!