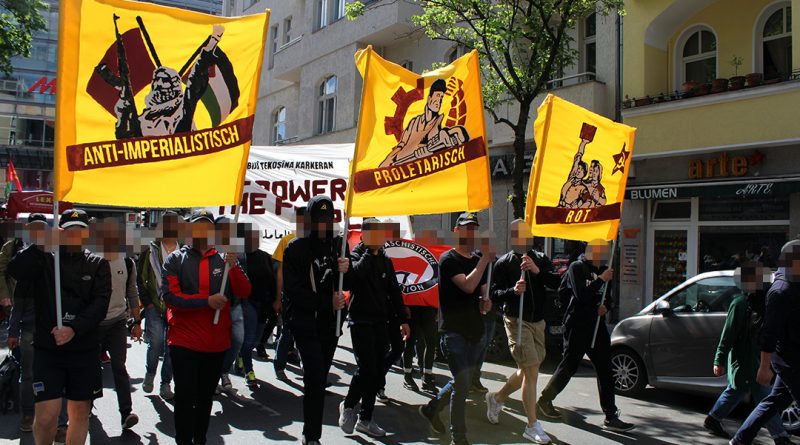 Up to 200 people participated in the anti-imperialist 13 o’clock demonstration through Berlin-Neukölln this year which was led by a strong and disciplined block of the red youth. This is the fourth year in a row in which we have celebrated our class’s day of struggle with Jugendwiderstand and the third year in which we hold our own red demonstration in Berlin-Neukölln. This year, we proved even more than in previous years what it means to rely on your own resources mainly and being successful doing so.

With a focus on Berlin-Neukölln, a strong May 1 campaign was again realized throughout April. There was a higher number of propaganda activities and a more systematic propaganda than in previous years, which had not only the purpose of mobilizing, but also to anchor our positions and contents even more firmly in the neighborhood and in the minds of the masses. This work, we noticed in many reactions, was extremely successful – they know us, they appreciate us, they know the 1st of May and they know what this day stands for and more and more ordinary people in Neukölln recognize us. Through our work the symbol of hammer and sickle with which they can identify, which they understand as the symbol of the oppressed masses and as a symbol against the rulers and their war-driven explotation-based system. This year again, during the mobilization phase, new comrades were involved in the work and have been organized.

In the 1st of May campaign various propaganda forms were used. Graffitis, slogans, tags and bombings also appeared in the neighborhood. Mobilization pictures were also made in Magdeburg and Cologne. Numerous banners were attached to sports fields, underpasses and bridges, wall murals were applied. Thousands of posters were posted in shops and stores and placarded in the streets. Thousands of pamphlets were distributed and red flags fluttered by street lamps, flags of Palestine, pictures of chairman Mao Tse-tung’s and posters for women’s liberation, posters against drugs and support for the Philippine Revolution have been hung up.

In the run-up to the 1st of May the bourgeois press and various reactionaries (for example anti-Germans, liberals and representatives of bourgeois parties and institutions) started an intense hate campaign against us – similar to the previous year, but much more comprehensive and more in general. Articles in the Epoch Times, Huffington Post, Jungle World, Berliner Zeitung, Berliner Kurier, BZ, Berliner Morgenpost, Tagesspiegel, Frankfurter Allgemeine Zeitung, Neues Deutschland, Haolam, Junge Freiheit and in various right and anti-German blogs, were dedicated to our organization. In this way, our content should be delegitimized and authorities should be encouraged and legitimized to intensify their repression.

But what is underlined by these articles above all else: our politics and practice are different from what the state and reaction expected from “the left” in recent years. And that is how it should be. In addition to a completely crazy anti-Semitism understanding and accusation, the authors mentioned the fact that we are also “young, well-trained men who arrange to meet in their free time to martial arts meetings” and organized “Arab and Turkish -born young people” as if it was a reproach and not a desirable and correct thing in any way, and that the demonstration and all activities did not actively involve young militant women. Other authors for example, in the article “Let 100 Fists Fly” stated that in the “North Neukölln Antiimperialist-Hood” a no-go area for anti-German and other anti-Communists was created.

The same propaganda comes from the new, anonymous, wannabe NGO “Berlin Initiative gegen politische Gewalt” that is dedicated to us. This organisation tries at the same time to push the left scene of the city to increased isolation against us and government agencies to encourage greater repression to prepare our criminalization. At the same time, Facebook also deleted our Facebook page in the run-up to May 1, allegedly because of our widespread solidarity with the Filipino Communists.

In this atmosphere of general media agitation against us and attempted character assassination, some of our particularly outspoken political opponents believed that they could take advantage of that to make trouble in the neighborhood. According to our reports, this could be prevented in several cases by rapid self-initiative of the masses.

The organic connection between anti-German reactionaries and the state was also very clear on May 1 at Karl-Marx-Platz. The comrades were on the show-booth, surrounded by forces of the state. Under the protection of the team cars, the reactionaries, who are in fact still partially thinking they are “leftists”, repeatedly sent the police into the opening rally in order to denunciate people they supposedly “recognized” as offenders. Those who still have to defend these people in any way have clearly chosen their side of the barricade in the class struggle. It is quite naïve of them to think that proletarian adolescents will leave something like that unanswered.

As in the previous year, the opening rally was complemented by revolutionary and internationalist culture, a Palestinian Dabke dance group and rap by Detweiler and Taktikka. Speeches by Halk Cephesi, Jugendwiderstand and FOR-Palestine were held – after that the demonstration started moving under the loud battle cry “The road free – for the red youth!” (“Die Straße frei – der roten Jugend!” The assembled press and provocateurs wanted us to fall into a trap set by them. But they were disappointed – the march was very disciplined and especially through the circumstances determined, loud and combative.

On a long march through our district there were always solidarity expressions from the roadside and residents, young people and old people who spontaneously joined the protest march – especially on the Sonnenalle a several dozen.

The demonstration was a worthy deployment of our class on their day of combat. The front block of the youth, this year also equipped with high holders, comprised up to 80 comrades. The slogan of the front banner “Unite in the fight” was underpinned by the impressive, forward-looking and homogeneous appearance of the red youth.

In addition, the demonstration was also supported by various migrant organizations and groups. The bourgeois scamper-newspapers underlined this with their assessment “half of the demonstrators are Germans, the other half was of Arab or Turkish origin”. In addition to the Halk Cephesi (People’s Front) from Turkey and FOR-Palestine, the comrades of the Democratic Committee of Palestine and the ADHK, as well as migrant youth and anti-repression structures were involved in the demonstration. The friends made multilingual banners for the freedom of all political prisoners and with the slogan “All Power to the People!”. In addition, some active football fans of various clubs supported the demonstration. A very important fact, since this is the largest and most vital youth movement in Germany.

The demonstration was ended properly at the Hermannplatz in Neukölln. There were concluding speeches – among others from the Rote Arbeiterjugend Magdeburg, a little bit of rap and finally greetings from our comrades from Münster and Flensburg. There, our comrades presented their own revolutionary and anti – imperialist blocs under the slogans “Youth – Future – Socialism!” and “Unite in the fight against exploitation and oppression!” at the trade union demonstrations of their cities (Münster – Flensburg) which we very much welcome and which were both very successful.

In the evening in Kreuzberg

Our criticism of the other events taking place in Berlin, with which we justified the step of carrying out our own, anti-imperialist, proletarian and red 1 May demonstration, remains correct and up-to-date. Both the morning beer and bockwurst demo of the yellow unions far from the working-class district as well as the ritualized, evening tourist and party carnival in Kreuzberg offers, in our understanding, no possibility to commemorate the fight day of our class worthily.

Nevertheless, there are also some internationalist groups and militant youth in the demonstration in Kreuzberg, who make it worthwhile to stand side by side with them. But even here we do not abandon our identity as class-conscious internationalists, as a combative red youth.

If at this demonstration, formerly belonging to the fighting masses and migrants, in a district formerly belonging to the militant masses and migrants, a banner is carried along, which, according to the current Springer campaign, indiscriminately blames everything and everyone being antisemitic while attacking the left-wing, democratic BDS campaign, in which many extremely progressive comrades of the Palestinian left and national movement are active, this is nothing but an attack on international solidarity and the Palestinian comrades. It is a slap in the face of the oppressed people that have every right to resist (and this includes even democratic boycott campaigns).

Whether this happens in a supposed block of women (purple flags and banners do not make women out of a majority of men) or not is not relevant. The banners of the block were also not signed with “Women’s Block” but with KvU (Kirche von Unten) and AJOC (Antifa Jugend Organisation Charlottenburg). They expressed their paranoid ideas in a Twitter comment on the incident and posted “May 1 today was good. There was almost no stress, but anti-Semitic thugs (presumably Jugendwiderstand) attacked friends of ours. It was about a banner, which should point out the terror of the PFLP. This is not okay.”

Not only that it is welcome for them that the peace strategy of the Senate in Kreuzberg has fully worked out and robbed the day its combative character with carrot and stick – no, they go so far into the bourgeois chorus of counterrevolutionary agitators and portray the PFLP which is the most advanced anti-imperialist power in Palestine as “terroristic”. Had it been a banner that should have “pointed to the PKK’s terror”, many more demonstrators would have – rightly – not put up with it. This double standards regarding the justified resistance and struggle of the oppressed peoples and nations must have been counteracted.

We could now start to explain, based on the reports of our sympathizers, who started violence first and who threw bottles at whom. But that’s not our style. There were calls to simply take the banner away without any trouble, it was not followed, everything else is a matter of understanding, respect, and a serious opinion on the side of the oppressed peoples of the world. There is no reason for an excuse, except for those who inadvertently and mistakenly came into this dispute – and the comrades involved in this dispute also deserve forbearance and understanding.

Despite all incitement, all denunciation, all repression and slander: Rebellion remains justified! Our 13 o’clock demonstration was what it should be: Anti-imperialist. Proletarian. Red. The demonstration was a battle cry for socialism. An expression of the organized class hatred of the youth at the side of the fighting peoples of the world. But it is only a small though powerful expression of our general work. And that wants to be developed in the current fighting year in big steps. Comrades – just stand up against this, get together, march on, let’s get started!