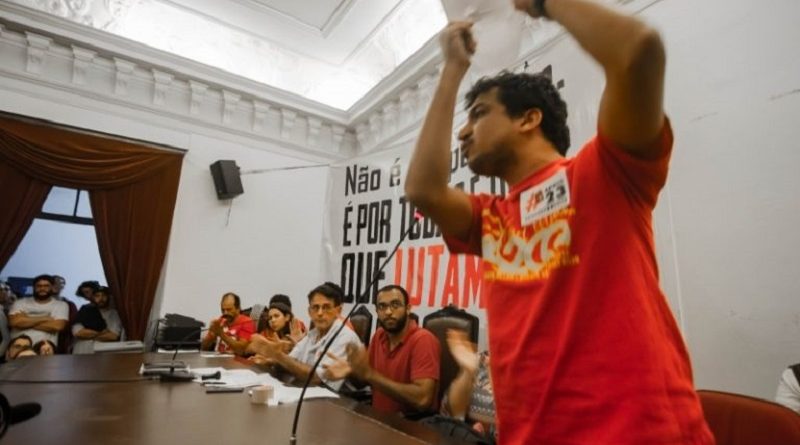 We direct the following words to our comrades in Brazil, to the international communist movement, and to our friends in Finland. In July the old state of Brazil captured 23 comrades for the protests and resistance organized prior to and during FIFA 2014 against the anti-people misspending and evictions. They are threatened with several years long, even 13 years prison sentences. Among them is also the leader of the revolutionary youth of Brazil, Igor Mendes, the likes of who must be raised in all countries from the righteous rebellion to overthrow all reactionaries.

The Brazilian reaction which is sinking into an ever deepening crisis, is waging a doomed struggle to stretch its life expectancy. The agrarian revolutionary movement relying on poor peasantry, with the League of Poor Peasants as its brightest expression, is developing as an unstoppable component of the new democratic revolution with martyrs accumulating ever so often. Thus the days of the bureaucratic bourgeoisie and landowners are dwindling, because as in the countryside, also in the cities a magnificent revolutionary movement is being constructed with communist leadership. With growing consciousness of that we express solidarity to the 23 comrades hardened by class struggle, being certain that the white terror resorting to ever more cowardly measures can not prevent the sun of new democracy rising and shining through prison walls.

Igor Mendes, son of the Brazilian people, fighter of the international proletariat, is not alone! His generation will see the Brazil of new democracy, as well as the destruction of imperialism with people’s war. We praise the unyielding struggle of the revolutionaries of Brazil as an inspiring example to the proletariat also in Finland. Our material force here is still a future perspective, but our work illuminated by our internationally shared only correct ideology, Marxism-Leninism-Maoism, shall fulfill the promise that already before the dawn of the revolution’s victory in oppressed countries, also the communists in Finland will serve the world proletarian revolution with the perseverance and self-sacrifice of our best Brazilian comrades.