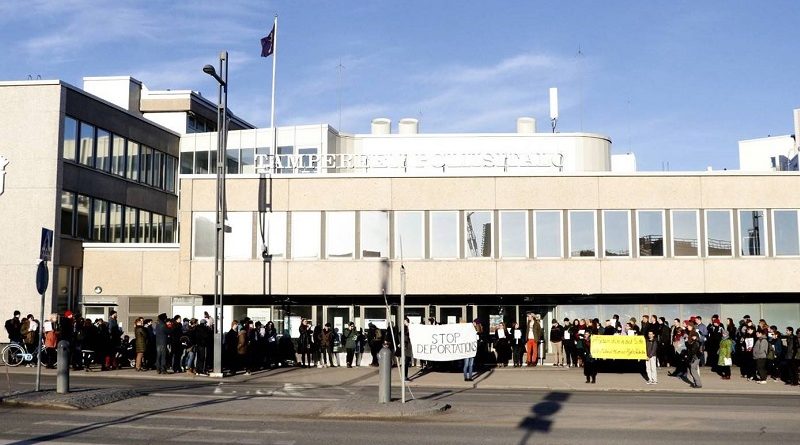 Already for several years the Finnish bourgeoisie has participated in the pillaging war in Afghanistan, where also the war troops of Finland have propped up the puppet regime that relies on feudal warlords and clerical reaction. The forced deportations carried out now by Finland are part of the ”deal” dictated by the EU on the Kabul regime, where Afghanistan is to receive 80 000 Afghans deported from Europe at the threat of having its development aid cut. In February this was affirmed by a new ”developmental cooperation deal”, carried out in part and independently by Finland.

Thus the Republic of Finland is doing routinely what the fascists in civil society are only dreaming of – killing refugees from Afghanistan with its machinery of violence and capital. This is the way Finland acts without a figurehead like Trump, because imperialism and white supremacy, of which Trump is a symptom of, are also in the heart of the Finland dandying around with its” democracy”.

On Monday 3rd of April in Helsinki, police with vans, gas, batons and dogs assaulted demonstrators who were resisting the transfer of Afghans kidnapped by police to the airport to be deported to the Afghanistan destroyed by Finland and other imperialists. Municipally administered bus traffic has also been used as transportation aid, and the responsibility for the flights lies at the state controlled airport infrastructure.

To oppose these entities separately and as a whole, we need revolutionary organizing independently of them and of the whole political system. Only that way it’s possible to accumulate the unstoppable power of the masses into a united front that can halt deportations and to make in turn the bourgeoisie and other enemies of the people fear. It’s also the only way for the Finnish proletariat to take matters into its own hands. Fascists will always be attacking this organizing effort so vital for the working class and oppressed peoples, and therefore its every step must be defended by all means. Solidarity with asylum seekers must be seen as part of the proletariat defending itself from fascism.

Side by side with the persecuted and with those deported to their deaths in our minds, travel past the election circus towards the international day of struggle of the working class!

Rely on proletarian internationalism against deportations and police brutality!