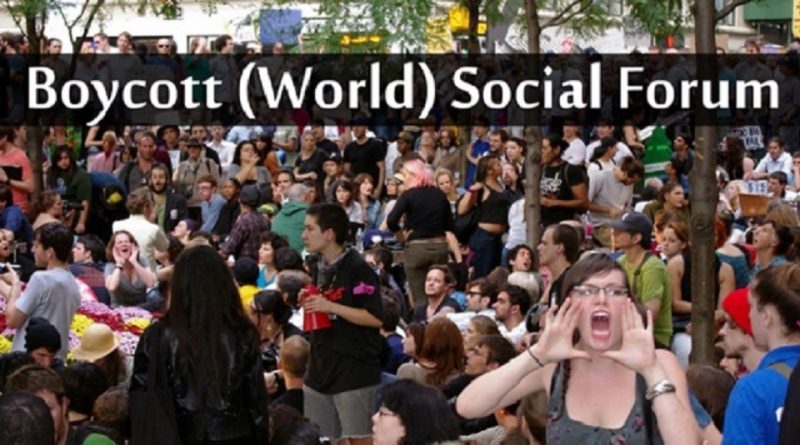 Revolutionary Democratic Front calls upon the people and genuine democrats to boycott the (world) Social Forum, being held in Canada in August 2016 and all the related forums and preparatory meetings etc. being conducted in different parts of the country including Hyderabad.

World Social Forum or Asia Social Forum is nothing but a safety valve to protect the crisis-ridden Imperialist camp.

The ideologues of TINA (There Is No Alternative) and ʹend of historyʹ floated this social forum idea to hoodwink people who are surging towards revolutionary democratic struggles world over led by revolutionary forces. Itʹs an NGO programme propped up by the imperialist forces. In this context we remind to the people and genuine democratic forces that similar attempts by Asia Social Forum in Hyderabad, World Social Forum in Mumbai, and a four-day international seminar in Hyderabad were boycotted and exposed by the revolutionary and genuine democratic forces earlier in India. MR-2004 (Mumbai Resistance Forum – 2004) was held in Mumbai exactly facing the World Social Forum premises to expose it second fiddling to imperialist machinations. More than 300 organisations consisting of Adivasis, Dalits, Muslims, Women, Peasantry, Working class, Students, Youth, Writers, Artists and Intellectuals in co-ordination with anti-feudal, anti-imperialist, anti-Hindutva and revolutionary organisations participated and made it a grand success.

Revolutionary Democratic Front was formed in 2007 at all India level to propagate democracy which revolutionary movement alone can achieve through and united effort of revolutionary and genuine democratic forces.

Self reliance, diversity and democracy are the hall marks of self rule, we see today under Janathana Sarkar in Dandakarnya.

Imperialist globlaisation, liberalisation and privatisation have reached a stage of fascism within 25 years. The so-called best democracies in the world UK, France and USA are stinking with communal and racist practices, particularly against Muslims, Blacks and non Whites.

Taking advantage of this crisis in imperialist camp, Islamic State is spreading like a false hope for Muslim youth – with a programme of ʹCapitalism failed and Communism failed hence Islam is the only hopeʹ.

It is not because that there is no alternative but because there are organised armed revolutionary struggles world over, these imperialists and counter revolutionary attempts are being made. National Liberation Struggles such as Palestine and Kashmir, Revolutionary Struggles and advances such as in Central and Eastern India, the Philippines and Turkey and various democratic struggles for protecting natural wealth and labour are surging all over the world as imperialist globalisation at global level and in India are entering into a fascist stage.

The development theory twined with genocide politics in Gujarat in 2002 has reached its ugly shape at central level in 2014 with the combination of Narendra Modi and Amit Shah and imperialist-RSS-BJP combine. The programmes like Make in India, Digitalisation, Acche Din Ayega with the Hindutva programmes of Ghar Wapsi, Common Civil Code and Ban on Beef have introduced Feudal brahmanical Hindutva agenda along with imperialist globalisation band wagon.

The third phase of Operation Greenhunt with an audacity to finish the Maoist movement in Dandakarnya by the end of 2016 with a programme of Mission 2016 has turned into a Genocide of Adivasis in Central and Eastern India. Resistance to this by democratic forces aspirations is to Save Bastar and uphold self reliant and sovereign rule of people under Janathana Sarkar.

The aspirations for Azadi in Kashmir and Manipur and different parts of North East are being ruthlessly crushed under the Armed Forces Special Powers Act. In recent days more than 50 youth of Kashmir were ruthlessly killed by the Armed Forces just because they have come out in hundreds and thousands protesting against the fake encounter of Burhan Wani.

Dalits all over the country particularly in Gujarat and UP are being attacked and killed with a pretext that they are eating beef or doing leather work with dead cattle. Various democratic struggles in different parts of the country including Telangana and Andhra Pradesh against displacement of the oppressed castes and classes and the land grabbing in the name of development are subjected to severe repression. Privatisation of defence, railways and such important sectors and entry of foreign universities and the closure of public sector is not only causing a huge number of youth being unemployed, but has become a threat to the sovereignty of people itself.

Hence the RDF calls upon the people and genuine democrats to wage a relentless struggle against this imperialist and Hindutva forces, steadfastly stand in solidarity with revolutionary and democratic struggles, boycotting the social forum which is nothing but a ʹHuman Faceʹ of imperialist globalisation.