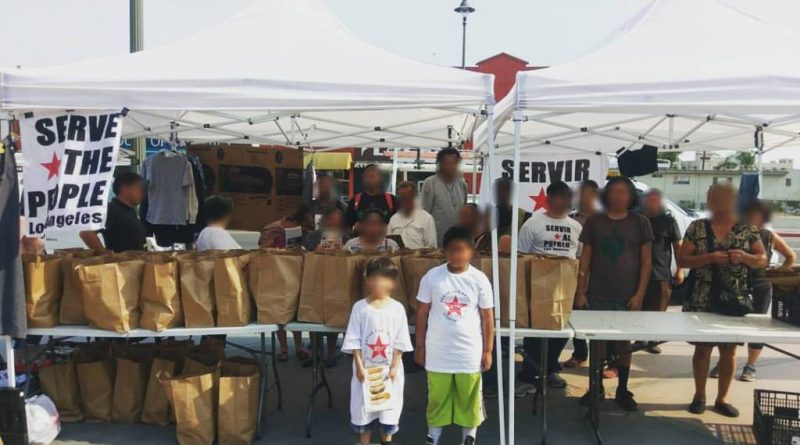 Our goal is to create organizations that are capable of defending themselves from the police that defend this white supremacist system. That is, the goal is not charity, it is solidarity. Our goal is to build community dual power as we continue to fight for a better life.

“Our practice proves that what is perceived cannot at once be comprehended and that only what is comprehended can be more deeply perceived. Perception only solves the problem of phenomena; theory alone can solve the problem of essence. The solving of both these problems is not separable in the slightest degree from practice. Whoever wants to know a thing has no way of doing so except by coming into contact with it, that is, by living (practicing) in its environment.” – Mao, “On Practice”

We write this short piece after reflections on our interactions with the community and their thoughts on gentrification. People know that their neighborhoods are changing, but many don’t know how to feel about this; many do not know how to feel about these changes until they, or their loved ones, become a victim to these changes and are tossed out of their neighborhoods like yesterday’s news. Folks know that gentrification affects people negatively, but, who knows, maybe, overall, it’s for the best since the community “does look a lot more beautiful and safer,” according to common sense. But who is to say what is “for the best?” That depends on perspective. The idea of gentrification being good, without class analysis, is the political linegiven to us and perpetuated every single day by the capitalist systemthat reassures us that we will be okay, all the while its claws penetrate deeper and deeper into our communities.

Because our role as Serve the People – Los Angeles (STPLA) is to sharpen the contradictions to challenge the community that we work with to build radical and alternative solutions with the community’s direct participation to the dead-end-reforms offered by the government (and non-profits, charities, etc.) that only reinforces its control, we write this piece to clarify the effects of gentrification and so that our understanding goes beyond evictions, as horrible as they are.

For anyone raised in Los Angeles, the word gentrification is not something new. Our neighborhoods have been changing, some faster than others. Many can remember the old Echo Park and Silverlake. Many remember York Street in Highland Park before it became gentrified. Now, Boyle Heights, East Hollywood, Frogtown, Highland Park, South Central, Koreatown, Chinatown, Little Tokyo, and the rest of LA are being gentrified. Change is inevitable, and we do not argue against changes that benefit the community, but most change takes place for the benefit of individuals, their pockets and at the expense of the community; most change in neighborhoods ignore the preexisting grievances of the community and simply seek to displace them as an answer.

To know the numbers of the displacement that has taken place over the past few decades in all these neighborhoods a thorough and necessary research project needs to take place. For now, it is enough to say that gentrification is happening and that it is not for the benefit of the overall community that is being displaced, just for a handful of individuals who profit from misery. (For more specific information on gentrification in Boyle Heights and tactics of resistance being utilized by the coalition Defend Boyle Heights, which we are members of, see: http://defendboyleheights.blogspot.com/)

Generally, a lot of the focus is rightfully placed on evictions, neighborhoods, buildings, art, etc. when discussing gentrification; this article will put the emphasis on the people from different points of view and how they are affected by gentrification.

Furthermore, gentrification does predominantly affect people of color and the perpetrators are usually affluent white people. Due to the history of this country it is generally true that white people have more money. Even so, this is not to say that people of color cannot be gentrifiers or that white people cannot be victims in this process. What it comes down to is money. People with money displace those without. This is especially true as rent-control is being eliminated throughout Los Angeles. A white family in West Hollywood paying $2500 in rent can still be a victim to gentrification if landowners decide to start charging tenants $4000 dollars in rent because it’s a hotspot to invest in.

Often times, apologists for gentrification and/or confused community members think of evictions as an afterthought. As long as the community is becoming more “beautiful”, “who cares if people have to move? They can just go live somewhere else.” Statements like this are common, especially amongst the more well-off individuals, and it overlooks many of the particular aspects that come from having to move and the changes thereafter. In this section we will explore these aspects from our conversations with the community.

As organizers we have many tasks to fulfill. In mass organizations, one of our primary tasks is to establish something viable and radically different, from the normal ineffective governmental/non-governmental organizations/nonprofits, that can be taken over by the community because of how essential it is. Our role is to encourage the community to break with the ordinary and ineffective governmental organizations because no amount of voting and reforms will ever meet our needs. Our role is to create organizations that can meet the essential demands of the community without having to rely on the state or private interests. Our goal is not to create more commodities. Our goal is to create organizations that are capable of defending themselves from the police that defend this white supremacist system. That is, the goal is not charity, it is solidarity. Our goal is to build community dual power as we continue to fight for a better life.

In particular with STPLA, an organization that recently turned 2 years old, our organization is focused on the community of Boyle Heights. Boyle Heights is a community with a rich history of resistance; a community that is home to Chicanxs, Latinxs, African-Americans, and immigrants from Mexico and Central America and more.

At the moment, our program provides:

Our organizing must continue because gentrification, which is a normal part of capitalism, will not end due to wishful thinking. These injustices will continue and it will not be a handful of activists who come to the rescue. We must continue to struggle in solidarity with our community and always always always, Serve the People!