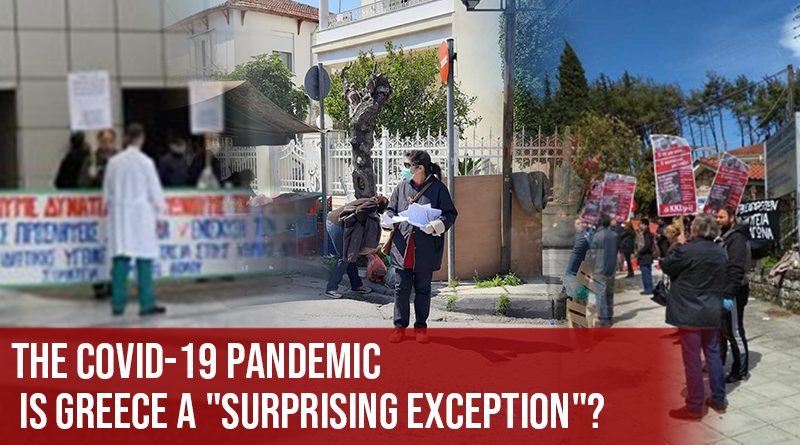 Because of the measures that were taken in Greece, bourgeois media has lauded Greece as a “surprising exception” to the “poor leadership and governance worldwide”. But how do the revolutionaries in Greece see the situation? We conducted the following interview with a representative of the Communist Party of Greece (Marxist-Leninist), or KKE (m-l), for their opinion.

Redspark: Comrades, could you describe to us what’s the situation in Greece right now?

The country’s (USA-EU) dependent economy and the crisis of the last 10 years, within a series of memoranda imposed by imperialists, has left a heavy imprint on the issue of the health care of our people. The reduction in health budget funds has resulted into shutting down many hospitals, firing of thousands people working in the health sector (doctors, nursing staff), and privatization of cleaning and catering services. At the same time, the primary and secondary public health sector was disbanded for the benefit of private capital.

As a result, the access for the people and the toilers to the hospitals faces unimaginable obstacles and inconveniences (long wait times, camp beds in hospital corridors, lack of doctors, etc.). Actually, while the access of toilers and people to medical care was dramatically reduced, it became almost impossible for the unemployed, refugees, and immigrants. The vast majority of laboratory tests and examinations are carried out in private laboratories, resulting in a rise health care costs, with many people unable to pay due to the great poverty that resulted from the 10-year crisis.

If we take into account the great rise in medication prices, and also the big limitations in the number of doctors’ prescriptions, it is obvious that everyone working in the health sector and all the people suffer with them. This is even without counting the thousands of unemployed, refugees and immigrants who have no access.

The closing of the borders imposed by the government was “due to the pandemic,” but in reality it was a continuation of the recent border closings for the refugees. In fact, it was a decision determined by the State’s politics against the refugees and against Turkey’s actions, not the needs of public health. In addition, it was an attempt to appease Europe of their fear of the pandemic being spread by refugees, hoping for a more favorable treatment by the EU in the upcoming crisis.

Redspark: How do you view the measures taken to face the pandemic situation, both on the national and international level?

The COVID-19 pandemic has affected all countries in the world. It has exceeded the level of the health crisis and has emerged as an economic-geostrategic crisis of the system.

First and foremost, the dominant imperialists (USA, China, EU, Russia) but also all of the countries of the capitalist, imperialist system, after the initial surprise, have realized that the post-pandemic political-economic-geostrategic situation will have different impacts in each country.

Therefore, they are now preparing to deal with this new situation and to create the conditions that will bring them to a more advantageous position in relation to their rival imperialists. That is, we will have tensions and sharpening of intra-imperialist competition. Based on this, they mainly seek to have the least impact from the pandemic; they are not at all interested in the health of the people and workers in their country while they definitely consider the political cost of the pandemic.

The previous years has seen what they call the “social state” literally dissolve, especially the health care sectors. The result of this dissolution is experienced by the peoples of the world and much more in our country. The capitalist-imperialist system’s perspective is being unraveled and stripped away in the eyes of the people and that pushes it to hurry and cover its weaknesses in every possible way. We are now seeing a state piracy of health materials between the imperialists.

The quarantine, the exclusions and the restriction of people to their homes, may be a medically efficient and necessary precautionary measure, but when this is applied by the bourgeoisie, it has other reactionary characteristics. This is true especially when the State takes no other measure of prevention and safeguarding of the people, like the opening of previously closed hospitals or new hospitals or the recruitment of permanent health personnel (doctors, nurses, administrative staff), new ICUs, free protective equipment supplies to hospitals and people, free mass tests or free medical care. At the same time, the operation of the majority of factories continues, and employees are crowded in them without any protective gear. Toilers are also crowded in transportation. There also continues huge gathering of refugees in the camps, disregard for the unemployed and the homeless and suffocating overpopulation in the prisons. In the name of protection against pandemics, the bourgeoisie finds the opportunity to take measures that ensures its staying in power and strengthens it in the rivalry after the pandemic.

These include anti-labor measures, thousands of suspensions, flexible working relationships, unpaid work and overtime work, drastic wage cuts and meager benefits to deceive workers. On the opposite side, there are benefits to the capitalists to overcome the crisis on the backs of workers and the people.

All these measures turn against the remaining rights of workers and the people. They are measures that are here to stay if the people and the working class do not react.

The measures will be accompanied by stronger state terrorism and limitation of the peoples’ democratic rights, even if the quarantine does not continue as strictly as it does now.

But the system’s attempt is to reinforce the idea that the people as a whole, but also each individually, are responsible for the development of the pandemic and the subsequent attempt to get the country out of the crisis, and therefore sacrifices are needed. This is a very dangerous ideology for the people, and unfortunately has left its mark on the consciousness of the people.

This, together with the defeat of the communist movement and the dissolution of the workers’ and people’s movement, worldwide and in our country, creates on the one hand a very negative balance of power with the people, and a very strong pressure on any progressive, revolutionary party to react to this situation.

The resistance must start now, in the development of the pandemic. This period should not be considered a “blank” or a grace period for the system. There must be no delays in action in waiting for the pandemic to pass. Obviously it will then be too late and very negative shift in the equilibrium to the bourgeoisie will have occurred.

Redspark: Have the measures affected the way your Party is carrying out its work? What do you see as the immediate tasks of your Party, as well as the tasks after the pandemic?

It is certain than the restrictions applied today negatively affect the revolutionary movements. That is why there must be a reaction in the current situation from every left-wing force to counter despite the prohibitions of the system, always taking into account the precautionary measures against the disease.

Given that now, but also after the pandemic:

From the point of view of the communist forces, of which we also belong, very important tasks arise. Not after the pandemic, as we mentioned before, but now and continuously as long as the system continues to attack. The main task is to reveal to the people the inability of this system to provide them with the basic living conditions with health and care. How false and helpless is capitalism-imperialism that even without a substantial class rival and with exclusively its own information and propaganda to the people, has failed to hide its nakedness on the occasion of the pandemic. We do not believe that restrictive measures protect our people. It is mainly the awareness that we must be careful not to reach the hospital, because the State is unable to protect us and treat us with the meager means it has, that forces us to follow the restrictions.

The main task is to fight to overthrow, to cancel, all these new measures that the system has taken against people due to the pandemic: anti-labor, anti-democratic, anti-popular measures, which strengthen repression and restrictions targeting the strengthening the power of the bourgeoisie and the imperialists. The main task is the struggle of people against the imperialists (US-EU) and their reactionary organizations (NATO) which, in view of the crisis caused by the pandemic, will seek the country’s greater involvement in their reactionary plans in the context of their competition with the other imperialists (Russia-China), resulting in much worse suffering for the people and the country. It is also a duty to the struggle for free and full medical care for all without exceptions.

A very serious task is also the effort of joint action, against the attack against the people, of as many as possible of the left and progressive forces in Greek society. Precisely because the tasks ahead of the new developments are very serious, the greatest possible effort is needed to cope with these issues. It is not easy, because some of these forces have paused their action in the name of health precautions, but also because some forces have returned to the bipolar “liberalism-social democracies,” supporting these options with proposals for a way out of the crisis within the existing system.

Finally, on the issue of volunteering. Volunteers often disregard that it is the bourgeoisie itself and its state that imposes and establishes volunteerism on their own terms. Therefore, they are carried away without realizing that they are being used by the State to cover its inadequacies and offload its own responsibilities. In contrast, the solidarity that has always been a feature of communist ideology towards the people suffering from the system’s attack must include initiatives and structures outside and against those of the system—and above all, to reveal and not to conceal the faults, responsibilities and reactionary choices of the system.

With these tasks and given the limiting measures imposed by the system, it is obvious that our modalities of intervention and action have been modified. It is the duty of every revolutionary organization to seek and adapt to the existing conditions, seeking contact with the masses and the overthrow these negative conditions. So we have adapted our organization and our propaganda to the new conditions with an online newspaper, web radio and by strengthening the Party’s website and broader political websites and blogs. But we are clear that the internet has limits and is controlled by the system. And most importantly, the internet cannot create a movement on its own. It plays a role in strengthening propaganda and—where and when possible—in counter-information, but the movement is created by the physical embodiment of revolutionary ideas in people and working places. This is exactly the barriers that the quarantine and the travel restrictions have put in place. This is what every revolutionary organization must fight to overthrow.

Without ignoring the medical conditions imposed by the pandemic, we seek our activation and propaganda in mass spaces. It is done either with posters and leaflets in places where people gather (supermarkets-banks), or with other political forces in protests in hospitals, in order to support the exhausted hospital staff and to lodge complaints against the authorities.

We believe that the conditions that will develop after the pandemic with the great misery and poverty of all the peoples and the continuing intense attack of the system will give many reasons for an outbreak of reactions, possibly revolts. We do not believe that with the lack of communist movement these reactions will have the characteristics that we would probably like them to have. But we are sure that the political parties of these ideas must seek to take part and above all, seek to intervene in these reactions and try to vaccinate them with these revolutionary ideas.