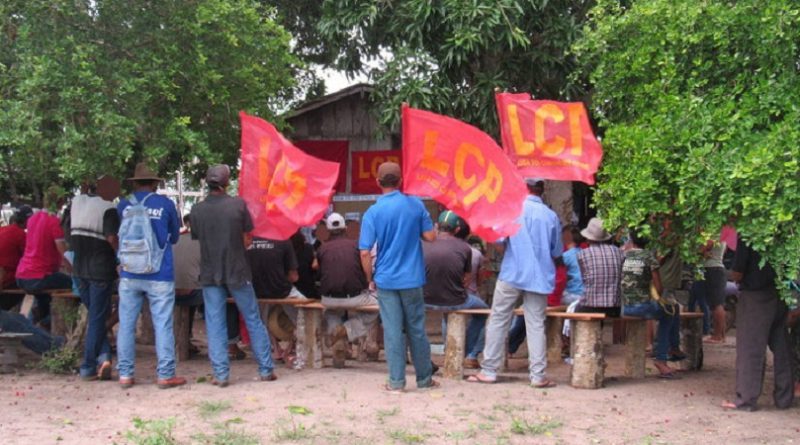 The families of the Paulo Bento Revolutionary Area occupied the headquarters of the Agrosilvopastoril Sanitary Defense Agency of the State of Rondônia (Idaron), in Mirante da Serra, on February 26.

The occupation carried out by the peasants, organized by the League of Poor Peasants (LCP) of Rondônia and Western Amazonia, was motivated by the state’s refusal to issue the Animal Transport Guide (GTA).

The organized action of the peasant masses forced the president of Idaron to commit to expediting the setting up of files for the families of the Paulo Bento Revolutionary Area that raise or wish to raise livestock on their plots of land.

Idaron is known for hindering the regularization of cattle production for small landowners, but for facilitating the registration of large landowners. On August 7 of last year, the peasants of the Monte Verde Revolutionary Area, also organized by the LCP of Rondônia and Western Amazonia, occupied the municipality of Monte Negro in Idaron and were able to gain access to GTA.

The Paulo Bento Revolutionary Area, formerly Camp Fidel Castro 2, honors the peasant Paulo Sérgio Bento Oliveira, 36, who was cowardly murdered by men from the Special Operations Group (GOE) of the Military Police in Mirante da Serra on May 16 last year. As denounced in issue 189 of AND [A Nova Democracia], Paulo Oliveira was persecuted by police, being detained inside the Camp Fidel Castro 2, beaten by the military police and then executed.

Two days after the murder of Paulo Oliveira, his companions organized the takeover of the Bonanza farm. Since then, peasants have been resisting the intimidation of landowners in the region and the PM. In July and August of last year the People’s Court was held, with the distribution of lots of land among the families, who came to live, work and produce on their piece of land conquered through organized struggle.