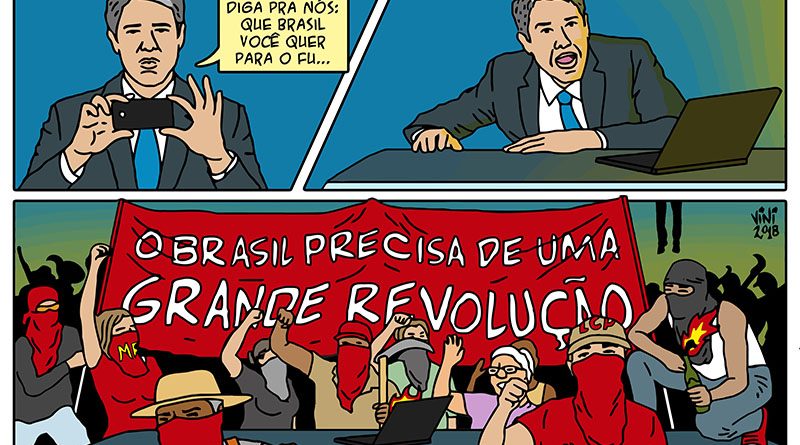 It has become a routine. Every election year, both the High Electoral Court and the Globo Network start an advertising campaign calling on the people to participate in the electoral farce.

The phenomenon of rejection of the electoral farce is what is new in the existence of this corrupt political system of the old bureaucratic state of the rotten ruling classes of big bourgeois and landowners, servants of imperialism, principally Yankee. This state is plunged in a deep crisis.

It is no longer news to anyone that the elections are financed by bankers, contractors, landowners and transnational corporations that are part of this bureaucratic capitalism, which guarantees the policies of super-exploitation of our people and of national subjugation imposed by imperialism.

Of course, the people, by coining the adage “who pays the band, chooses the song”, know for whom the “elected” will render their services.

As the largest media monopoly and defender emeritus of the “democratic right-wing state,” anchored on the electoral farce, the Globo Network, for the 2018 elections, came up with the “the Brazil you want for the future” campaign.

Their intention is to generate a liberal agenda for the candidates to commit to during the election campaign, and at the same time to call on the electorate and commit it to another electoral farce, trying to postpone the end of the old order.

The press monopoly does this despite knowing the political and administrative history of the country and its bureaucratic capitalism – in this way, it acts as an enabler of endemic corruption. It is well known by the masses and also by the press monopoly that those who will claim to fight for better education will be the same ones who will steal school meals; those who defend the right to health will be the same ones who will rig the bids for the purchase of medicines and hospital equipment, and those who promise new roads or railroads already have the name of the contractor in their pocket. Knowing all this, Rede Globo puts the responsibility on the people to choose the “best” programs and the “best” politicians. Pure hypocrisy.

Since the videos displayed in the news programs are edited and therefore handpicked, such editors must be doing the utmost work to defenestrate the statements that flow from their newsroom denouncing global hypocrisy.

What the people want

If you can draw anything positive from the Globo Network campaign, there remains the sincerity with which the people have exposed the evils of the old order, an order that the Globe defends tooth and nail, since the cause of so many evils is due to exploitation by the financial system, the latifundia, the agribusiness, the remittance of profits and the brazen theft of oil and minerals, as well as the administration of politicians bankrolled by such economic groups. Groups that support Globo through advertising.

The people ask for nothing beyond what they need and for what they are more than deserving. As the sole producers of the country’s wealth, the people have the right to everything, and therefore their claims and means are just. Just as anger and rebellion against its exploiters, who put them in the worst conditions of work and life, is just.

Only revolution can give

What most people have already discovered is that through this Globo-backed electoral farce, they will never achieve the fulfillment of their yearnings – hence the desperation of this brainwashing agency and of all reactionaries, both civilian and military.

If the people want the right to land, only the Agrarian Revolution will deliver it – contrary to Globo, Band, Record and similar institutions. This will be done by taking the latifundia and dividing it up for the poor peasantry, currently with no land or with little land, freeing the productive forces in the field of the semi-feudal relations imposed by the landowners. The New State – the State of New Democracy – will support the peasantry with credit, equipment, and technical assistance, thereby reversing the countryside-city to city-field flow, alleviating the urban chaos resulting from the existence of an unemployed and surplus population, mainly of rural origin.

If the people want work and not alms, the New Democracy Revolution will give decent work, surrounded by all the guarantees and rights universally won by the workers. The work will be guaranteed by promoting the nationalization of the monopolies operating in the country and subjecting the economy to the interests of the people and the nation, and not to the monopolies and the financial oligarchy.

Through the confiscation of all major capital and cancellation of public, internal and external debt, the Power of New Democracy will have a large amount of resources to effectively provide health, education, infrastructure, home and leisure to all people, promote and boost national production, technology and national scientific and mass culture.

From a historical point of view, other peoples have already lived this glorious experience, though sabotaged by counterrevolutionaries, but only temporarily, since there is no definitive defeat for the working class and other masses of the people.

By disregarding the farce that represents the electoral path – even defended by the opportunist and electoral Brazilian false left – the only thing left to the people is the elevation of their mobilization, politicization and organization, understanding the need of the revolutionary party of the proletariat to lead the process, until the final victory.

Let the reactionaries of all stripes tremble at this idea! Their barking will not prevent the emergence of the new order, whose flashes of the flames of their growing uprising already foreshadow the new day.