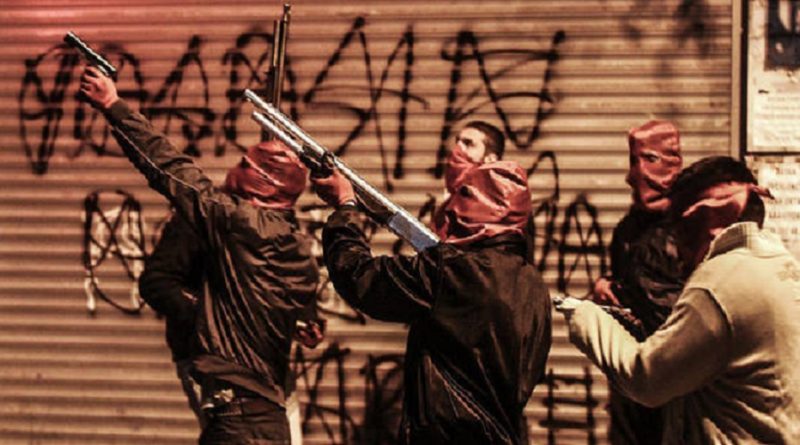 The following text is the translation of the introduction to the newly released book of Halk Cephesi (People’s Front) called “The System Brings Death, The Revolution Gives Life”. We are happy to publish this document, knowing the growing efforts of revolutionary organizations to struggle against drugs and other type of tactics of the bourgeoisie to destroy or make the proletariat passive.

The policy of decadence is a policy of imperialism to make the people surrender.
We will fight decadence with the organized power of the people.
The state is behind decadence, the revolutionaries are against it.

In this book we might not tell you an extraordinary life story, but we will be telling a story of a life decaying inside of this system, getting closer step by step to a new life. Ali is a poor youth who moved from his village to Istanbul and who engaged in drugs. This book tells how Ali went from a decayed life to a revolutionary life. Some of us were saddened by  stories on TV about ”death from drugs”, some  of us saw it on the streets and were met with shock, some of us know this malady close up because of an addicted relative. This life story shows, that drugs, are even close to those who swear they will never do them and at the same time it is an example that anyone and everyone can be liberated from drugs.

Drugs are one of the sources of income for the state. Drug revenue provides financial income, and drugs can numb the anger of poor which is the biggest threat against its system.

The use of drugs has been multiplied since the reign of AKP. The drugs bonzai (synthetic marijuana, K2 etc…) which was accessible by only the rich until a few years ago is now almost widespread as cigarettes. Because of the low cost it is easily accessible. And with the support by the state; the access to bonzai and other drugs has become common place.

Drugs are a boon for the survival of this system which exploits the people and leaves them in poverty and hunger. The drug gangs who are everywhere in the country are working with the police, or the police is directly involved in them.¹ They even sell drugs in front of elementary schools. First they distribute it for free, afterwards they steal our health and the little money we have left in our pockets with it. We are dealing with a state that is so much an enemy of the people, that they’re backward enough to poison our 7 year old children for profit. They leave our people to hopeless, unhappy lives, they steal our futures, health and hopes. They lull people to sleep with drugs so that we won’t hold them to account for what they steal from us. We die, but they make more and more profit every time.

Imperialism and its Collaborators Use Drugs as a Weapon Against the People! Prostitution, Drugs, Gambling, Alcohol and All Forms of Decadence is a Policy of the Fascist State!

We’re living in a country where the age of use of volatile substances has become 11, the age which the use of weed has become 12-13, the use of ”hard” drugs like heroin and ecstasy has decreased to 14, and where there are 5 million people addicted to drugs like pills (ecstasy), thinner, bali (glue), weed, heroin and other similar drugs.

The number of addicted people who apply to AMATEM³ has increased by 1781% since 2004. The consumption of alcohol has increased… This increase has been verified by the Minister of Transportation Binali Yıldırım with his statement ”we increased the number of rakı factories in Tekirdağ from 2 to 18.” While in 2004 the number of applicants at AMATEM was 40 thousand, this number increased at the end of 2012 to 227 thousand…

During the reign of AKP, between 2002-2010, prostitution has increased 4 times, prostitution crimes 220%. Child abuse has tripled in 8 years.

In the last 12 years of AKP being in power in Turkey, the consumption of alcoholic beverages has increased 4 times.

1 out of every 4 people are depressed and the number of people using antidepressants has reached 26 million.

There Are 3 Main Reasons For the Policy of Decadence:

First; Decadence, is a compulsory part of the apoloticization of the masses. The more that prostitution, drugs, gambling and other forms of filth become widespread, the weaker the peoples ability and resolve to resist becomes. People whose brains have been drugged, who can’t even think, will not even fight against the enemy who wants to exterminate them. On one hand the people have been and are tempted by the media to accept decayed lives, to embrace individualism, and to take up egoism which trashes the values that  makes a human, human.

The masses who have become egoist and poor are ready to sink in the swamp of prostitution and drugs.

Second: Prostitution, drugs and gambling, are an important source of income for the system. The political and bureaucratic agents of the oligarchy, are principally feeding themselves on this source of income. Counter-guerrilla activities are principally financed by these sources. Because of this, it’s natural in this country to see a statement by a minister of the Turkish Republic saying ”drug trucks are escorted by police vehicles” or to read in official reports truths like ”drugs are moved with panzers”. Drug dealers like Yaşar Öz have been employed by officials of this country.

Third: especially drugs, are one of the unwritten important sources of the Turkish budget. A Financial Affairs Manager stated with numbers from 1994, that the value of heroin being transported through Turkey is worth 50 billion dollars, and that 5-6 billion dollars of this is ”the money left in Turkey”. Because of this, Turkey is a transition country for the drug trade. Not the half million army, or the hundreds of thousands of police personnel, are blocking the smuggling. In reports it even states that Turkey not only a ”transition” country anymore, but even a country which produces drugs itself.

What will happen to the thousands of lives which have been darkened by drugs? Will the revolutionaries of this country, turn their backs to the poor children of the people who have been decayed, put in a stupor where they can’t even think in this system? Of course not. We will teach the people’s children who have been put out of their humanity by the system, how to fight against the system who made them like this.

If drugs are an important problem, then the revolutionaries have to handle this problem according to its importance. In neighborhoods that are organized there have been campaigns against drugs. Revolutionaries who do not permit drugs and who have punished drug dealers who entered these neighborhoods have been imprisoned by the state. Because the revolutionaries burned kilos of bonzai in front of the people, they were accused of ”destroying public property” in indictments. The judges, the prosecutors of this state have proven with their indictments that they see bonzai as ”public property”.

The revolutionaries didn’t watch the attack of decadence without an answer, they created their alternative.

Hasan Ferit Gedik Center for Struggle and Liberation Against Drugs, was established after the Gazi People’s Assembly occupied the old wedding hall of the municipality. The addicted who come to this center, instead of receiving conventional treatment, receive a revolutionary approach to addiction recovery. First by struggling against this decayed system, by combining production and education with activities instead of being treated with just medication. They don’t feel the need to use substances to ”feel happy” anymore. Because the love and respect they couldn’t find in the system, is there with the revolutionaries. The people who have been looked down on, and have not even been seen as humans by this system, are seeing they can successfully learn a profession and can develop their talents.

Our people, who have been decayed, defiled and degenerated, who have had their minds stolen by this system, will be liberated through the destruction of this system. The liberation from drug addiction is not a medical or technical problem, it’s a problem which requires changing the system.

The name of the Struggle and Liberation Center comes from Hasan Ferit Gedik, a comrade of ours who fell as a martyr in our struggle against drugs. Hasan Ferit left his neighborhood Küçükarmutlu without any hesitation, to go to the Gülsuyu neighborhood where he received news that drug gangs attacked his comrades and he fell a martyr in the hospital after being shot in the head by drug gangs.

In the evening of 6 November, a group of Cepheliler³ went to a grocery store known for being one of the sources of decadence in the area to warn the owners at the Karafiller street of Küçükarmutlu neighborhood in Istanbul, after which the store owners opened fire. Birol Karasu fell martyr after being fired upon.

Drugs today are one of the biggest obstacles to organizing the masses of people into the ranks of the revolution. Because of this we struggle against the filth of this system ruthlessly. The struggle creates its own people’s heroes in inside it.

There are thousands like Ali, who is told of in the book. And we will reach thousands of Ali’s to save them from this swamp. The new human will grow in struggle.

The revolutionaries will be the ones that will prevail!

We will expand our struggle against drugs, prostitution,  gambling and every form of decadence with the Ali’s of the world.

Notes of the translator

1. In the case of the killing of Hasan Ferit Gedik the police openly protected the drug gangs and their members.
2. AMATEM’s are government run drug rehabilitation centers. It is widely seen as a useless institution who has long waiting lists (at least 6 months) and where clients don’t even get better at all, usually they get even worse.
3. Cepheliler (meaning; Frontiers), is the name used for DHKP-C militants.