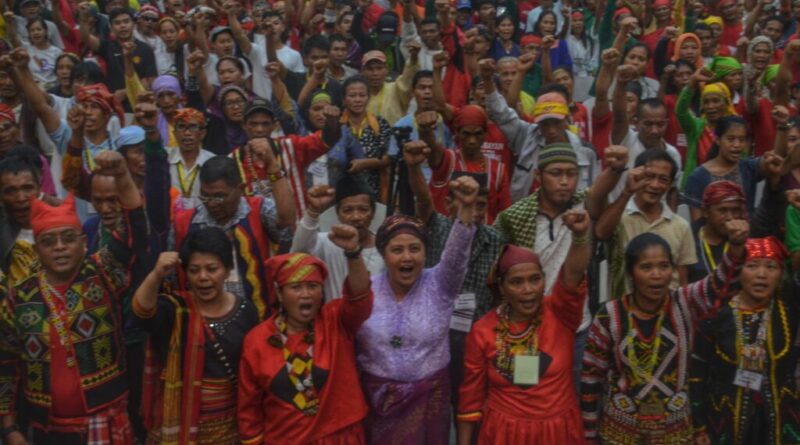 The Party unites with the Igorot masses of the Cordillera, the Agta, Aeta, Ata, Dumagat, Manibi and other ethnic groups throughout the Sierra Madre, the Mangyans of Mindoro, the Tumandok and Ati of Panay, the Lumad tribes and the Moro people in entire expanses of Mindanao and other minority groups across the country on International Indigenous Peoples Day.

Minority groups in the Philippines continue to suffer oppression and discrimination. There is too much neglect in their communities that do not have access to the necessary health, education and livelihood services. They continue to be considered inferior people and oppress their culture and customs. To the minority masses, the reactionary government, always in the form of armed soldiers, is an oppressive power always threatening their rights.

The minority masses in the Philippines are facing an unprecedented war of repression under the US-Duterte regime. Under the Anti-Terrorism Law (ATL), the Moro people are victims of “terrorist profiling” and minorities in the highlands are victims of “red-tagging.” Minority people in Zambales and Mindoro were the first to be charged under the ATL.

The rights and welfare of indigenous peoples are being trampled on to give way to the interests of foreign and local big capitalists. Across the country, the operation of giant mining companies, dam and plantation projects, bogus reforestation, ecotourism projects and others that violate the rights of minorities to their ancestral lands and destroy the environment under the guise of “Progress” and in the name of profit.

The tyrannical regime is brutally using its armed forces to sow violence and fear and drive the minority masses from their ancestral lands. Under its counterinsurgency program, minority communities are subjected to military rule to intimidate the masses and make them obey their orders.

Their communities are being fully mobilized and they are being told to “surrender” to Duterte’s power. Bombs and shelling were indiscriminately in the mountains to sow fear among the masses and force them to evacuate. They are offered “housing” to move them away from their land and forests as sources of food, water and livelihood.

Despite the promise of peace, violence continues against the Moro people to suppress their revolutionary defense of their rights and interests. The big capitalists are consuming the wealth of the Moro land. Their ancestral lands are being invaded by foreign plantations and companies planning to usurp oil and mineral resources.

All minority people in the Philippines must unite to fight Duterte’s tyrannical rule and defend their rights.

It is incapable of struggle to fight for the right of the minority people to self-determination, for their ancestral land, and for the enrichment of indigenous culture. Fight the oppression of the US-Duterte regime and the repression of minorities who stand up for their democratic interests.

A large part of the strength of the New People’s Army (NPA) comes from the broad support of the minority masses in the countryside and the highlands, due to the NPA’s vigorous advancement of their interests and raising their consciousness. Not a few minorities serve as commanders of various NPA units in various regions. Minorities are among the best Red fighters of the NPA.

The minority people know that armed struggle is the most effective way to fight the fascist terrorists who oppress and repress them and to defend the environment from the massive usurpation and destruction of big capitalists. Revolutionary armed groups of the Moro people also continue to emerge who are ready to continue their long history of armed defense.