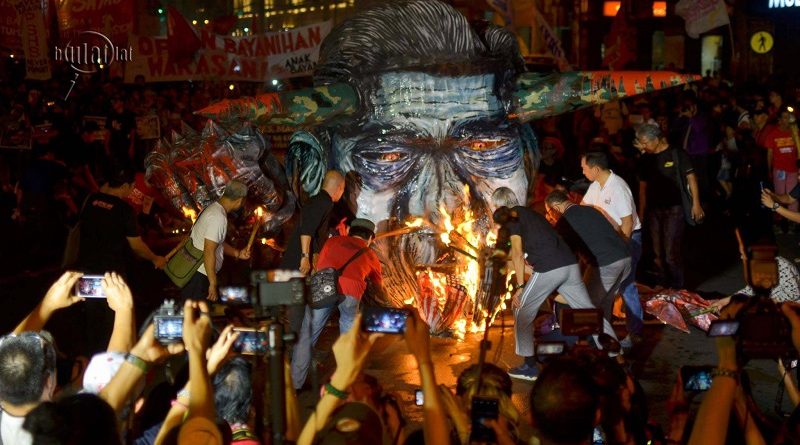 MANILA – Some 5,000 progressives marched here on Dec. 10, the 68th commemoration of International Human Rights Day, to denounce human rights violations, which they say continued and worsened under the six-month-old Duterte administration.

The protesters, led by Bagong Alyansang Makabayan (Bayan), Karapatan and the Campaign Against the Return of the Marcoses to Malacañang (Carmma), held a program at Liwasang Bonifacio, then marched to Chino Roces bridge (former Mendiola bridge) near the Presidential Palace.

In what could be their strongest critique so far of the Duterte administration, leaders took turns lambasting the continued extrajudicial killings, militarization, illegal arrests, detention and other abuses, as President Duterte continues the war on drugs, coupled with his predecessor’s counterinsurgency program, Oplan Bayanihan.

Hundreds of progressives from the Visayas and Bicol regions joined those in Metro Manila, as part of the week-long protest caravan Lakbayan. The groups condemned the soldiers’ attacks and continued harassment of progressive leaders in rural communities. They said that aside from branding progressive leaders as “News People’s Army” members, state agents are now also branding activists as “drug suspects” to justify arrests and other forms of harassments.

“Digong, enough!” went the chanting, led by Bayan secretary general Renato Reyes, who said Duterte – who goes by the nickname “Digong” — should stop the “madness.”

He said as chief executive, Duterte has responsibility to stop the rights abuses under Oplan Bayanihan and his vicious war on drugs which has killed almost 6,000 people, mostly from the poor. Most of all, said Reyes, Duterte should stop the madness of rehabilitating the Marcoses.

Reyes criticized Duterte’s claims of being a “Leftist and a socialist” when up to now, he is yet to order the release of more than 400 political prisoners, while he allowed a hero’s burial for ousted dictator Ferdinand Marcos Sr.

“The President should not listen to the generals, the police, the landlords and the politicians. He should listen to the people,” said Reyes.

Duterte should release all political prisoners

Bonifacio Ilagan, Carmma lead convenor, said drug addicts have a chance to go into rehabilitation, but those who are addicted to power and plundered wealth, such as the Marcoses, have no cure. “But the Marcoses were rehabilitated by no less than our president, along with nine justices of the Supreme Court,” he lamented.

He said Duterte has trampled on the victims of martial law by allowing a hero’s burial for Marcos, who was deposed by the Filipino people. Marcos’ addiction to power, he said, was inherited by his son, Bongbong, who, he said “will certainly run for president.”

He dared Duterte to cut his ties with the Marcoses.  Ilagan added that they survived fighting a dictator during martial law and will again fight any attempt reviving martial law.

Groups also lambasted Duterte’s statement that he will not release political prisoners until the National Democratic Front of the Philippines (NDFP) has signed a bilateral ceasefire agreement.

Also speaking at the program was NDFP peace consultant Concha Araneta-Bocala, who said the peace negotiation “is not a poker game and the political prisoners are not pawns.”

“This shows that the GRP (Government of the Republic of the Philippines) only wants a ceasefire, but is not sincere in addressing the roots of armed conflict,” she said. Bocala added that the NDFP is open to signing such an agreement, provided that political detainees are released within 48 hours.

Boy Cadano of Hustisya said he is happy that his youth activist son, Guiller and his companion, Gerald Salonga, were recently released after two years in detention, following their acquittal from criminal charges.

“I am happy as a father, but my happiness is incomplete, because more than 400 political prisoners are still in jail. They should all be free,” he said. He cited 66-year-old political detainee Bernabe Ocasla who recently died from a heart attack at the Manila City Jail.

“How many more should die before this inutile government take action?” Cadano said.

Not the change we want

Karapatan secretary general Cristina Palabay said no change has come under Duterte government. Despite his campaign promise of “Change is coming,” Palabay said political prisoners are still detained and dying in jail, cases of illegal detention and torture continues to mount, as well as extrajudicial killings under Oplan Bayanihan and anti-drug operations Oplan Tokhang and Oplan Double Barrel.

Worse, she said that under Duterte, the court acquitted and freed President Gloria Macapagal Arroyo, whose counterinsurgency program Oplan Bantay Laya killed 1,206 activists. Duterte also promoted and appointed Lt. General Eduardo Año as chief of the Armed Forces of the Philippines. Año was implicated in the abduction of peasant activist Jonas Burgos in 2007.

“Is this the change we want?” she asked. The crowd resoundingly replied: “No!”

She said that although they support Duterte on his pronouncements for an independent foreign policy, but they will never back down with the dictator tendencies of the President.

“Marcos is gone but the state continues to use an iron fist against the people,” said Bayan Metro Manila chairperson Raymond Palatino, as protesters burn the effigy.

Vencer Crisostomo, Anakbayan chairman, meanwhile, vowed to fight against any rising dictatorship. “If martial law will be declared, we will fight even if it costs us our lives,” he said.