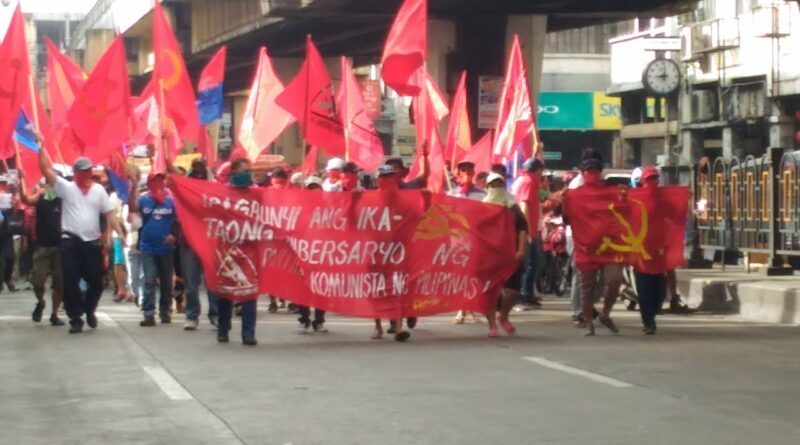 On May 1, 2021, the Revolutionary Council of Trade Unions (RCTU-NDF-ST) extends its strongest solidarity to all Filipino workers and people in commemorating and celebrating the historic International Labor Day.

The working class and the entire working class are now celebrating in various parts of the world the historical unity and action of all the oppressed and exploited classes who oppose the anti-people and anti-worker policies implemented by the monopoly-capitalist regimes and of the client states of imperialism. The people of these countries are united and they strongly oppose the neoliberal policies being implemented in conjunction with the fight to suppress the COVID-19 pandemic.

In the Philippines, where workers and people are now facing unparalleled poverty due to the continuing spread of the COVID-19 pandemic and the nearly five-year devastation to the livelihood and rights of the people by the deadly virus in Malacañang and at the hands of the AFP-PNP who recklessly used their hands to enforce militarist lockdown. This is his (Duterte’s) chosen solution to the pandemic and violent repression against the people critical of his rotten governance and criminal negligence.

The historic International Labor Day is an inspiration to the workers and people who are struggling and seeking social change, which is highlighted by the collective action of the workers and people and their courage to fight and succeed not only for their own interests but for the welfare of the whole people.

In the midst of the US-Duterte fascist regime’s militarist lockdown and the repression of workers and people, there remains a large gap for unification and consolidation to take action to fight for health, wages and employment, livelihood, rights and independence of our dear people.

It is time to call for the ouster of Duterte because of his corruption, his traitorous actions towards the Filipino people, criminal murder of innocent civilians, fascist governance and the negligence, uselessness and bankruptcy of his way of fighting COVID-19. Instead of being suppressed it gets worse after a person sloppily dealing with it. He has plunged the Filipino people into further poverty as his family and accomplices continue to sweep away the people’s funds. He makes it a joke to deal with the very serious problems of the people. After the town’s funds were drained due to the saturation of the generals and his accomplices, in February 2021 the national debt to various banks and financial institutions inside and outside the country reached P10.405 trillion with conditions regarding economic relaxation and other neoliberal policies.

In the past year, the country’s economy has continued to fall by approximately 9.5%. In fact, it is characterized by widespread unemployment and wages that do not keep pace with rising commodity prices such as food. According to the IBON Foundation, up to 5 million Filipinos are currently unemployed and it is expected to increase in the coming days and months. The accepted minimum wage of formal workers has dropped from P80 to over P100. Commodity prices are skyrocketing due to the rising inflation rate of 4.7% by the end of February 2021.

At this stage, the long-standing call of workers to end the plague of contractualization schemes, wage increases for workers in the private and public sectors, health workers and professionals, free and safe education for youth and free social services for the people has not been met. Duterte is wary of the particular call of the health workers represented by the Alliance of Health Workers (AHW) to pay attention to their welfare especially and they are the main fighters in the war against COVID-19.

The US-Duterte regime has already passed the blame to the people of previous regimes. He led the killings in the name of his war on drugs, authorized the rapid rise in the price of basic commodities and food caused by the anti-people laws he immediately passed, carried out mass arrests for fabricated cases. and assassination of activists and unionists, and subjugation to China even as it continues its construction of artificial military structures on islands and reefs within the scope of the Philippine exclusive economic zone (EEZ).

The militarist approach and the lack of a scientific plan on how to suppress the pandemic are disgusting and must end. On the other hand, in the midst of hunger, widespread unemployment and destruction of livelihoods suffered by the people due to lockdown and scarcity of aid, the National Task Force to End Local Communist Armed Conflict (NTF-ELCAC) is openly extorting public funds. NTF-ELCAC worth P19 billion, and various intelligence funds that are being used to suppress his critics.

In Southern Tagalog, the massacre of 9 activists and the arrest of 6 more on March 7 or Bloody Sunday were perpetrated by the AFP-PNP. Prior to this, Arnedo Lagunias, union officials at Honda and the Alliance of Workers in the Engklabo (AMEN), and Ramir Corcolon of COURAGE were illegally arrested. Meanwhile, during Semana Santa during which the people were celebrating, Dandy Miguel, vice chairman of PAMANTIK-KMU and president of the union at Fuji Electric in Canlubang, Calamba, was assassinated. Prior to his assassination, Dandy Miguel and the PAMANTIK-KMU were previously tagged by General Parlade of NTF-ELCAC and SOLCOM, and of the PNP-CALABARZON.

These unionists and activists have not committed any crime against the people other than their action in the streets to demand land, wages, jobs, and rights, but the response of the fascist state among their ranks is murder.

Based on the information obtained by the RCTU-ST, red-tagging and harassment of union leaders and KMU affiliated unions in SW continues and intensifies. The NTF-ELCAC, created under the EO 70 or whole-of-nation approach, and the Joint Industrial Peace Concerns Office (JIPCO) created by PEZA and the PNP to suppress what they call “radical unions” play a major role. The AFP-PNP is also wielding the sharp sword of the Anti-Terorrism Act of 2020 as a license to pursue unionists and activists, threatening individuals they want to silence who they call “communist terrorists” despite strong opposition pending here by the people in the Supreme Court.

In the enclaves in the region, the PNP-CALABARZON is active in conducting seminars under the guise of anti-Covid, gender awareness, sexual harassment and environment but the real agenda is to find out who are the union leaders in the said workshops and then talk one by one. The same is done in the factories with established unions in the province of Laguna. RTF-ELCAC personnel forcibly recruited union leaders and well-known organizers with some working class traitors and threatened that if they did not cooperate with them, they would imitate their imprisoned and murdered labor leaders.

On the other hand, the regime is desperate in its ambition to crush the revolutionary movement in its fading term, so, to show that it is winning the war, it is fabricating lies and red-tagging rural peasant leaders, unionists and activists in the city who are now victims of the dirty war and terrorism it is sowing. The truth is, the number-one terrorist in the country is none other than Duterte himself. His hands are stained with the blood of hundreds of farmers, unionists, and activists who are victims of his killings and are crying out for justice even the people oppressed by state terrorism and criminal negligence in COVID-19.

Meanwhile, it is a great folly to consider the CPP-NPA-NDFP as terrorist organizations when it is they who are advancing the People’s Democratic Revolution (DRB) and seeking the implementation of the agrarian revolution for the benefit of the peasantry, and who wants to build a society free of oppression and exploitation. It is even more foolish of the Duterte regime and the butcher NTF-ELCAC to consider activism and unionism as terrorism and to make them targets of the war against the revolutionary movement because the Philippine Constitution and international rules and humanitarian law guarantee activism and unionism.

The Duterte regime has no other destination but its rapid isolation from the people and its collapse due to its corrupt and sloppy approach to the pandemic.The people are overwhelmed with endurance and are looking for change and a serious response to pandemics and poverty. The Filipino people who love the dignity and independence of the Motherland can no longer ignore Duterte’s continued neglect of his people and the sale of the country’s independence and sovereignty.

In celebrating International Labor Day, let us further unite and strengthen the unity of the working masses and the Filipino people to fight for their livelihood and rights and thwart the plots of the local tyrants led by Duterte. It is necessary to rekindle strong unity and ignite the struggle to overthrow the long-suffering oppressor of the Filipino people-Imperialism, Feudalism and Bureaucrat Capitalism now represented by the Duterte regime. With the advancement and victory of the DRB, under the leadership of the CPP-NPA-NDFP, the Filipino people will achieve true freedom and democracy with a socialist future.